Ward is a rising star and his work in Empire of Light is just another example of his talent. 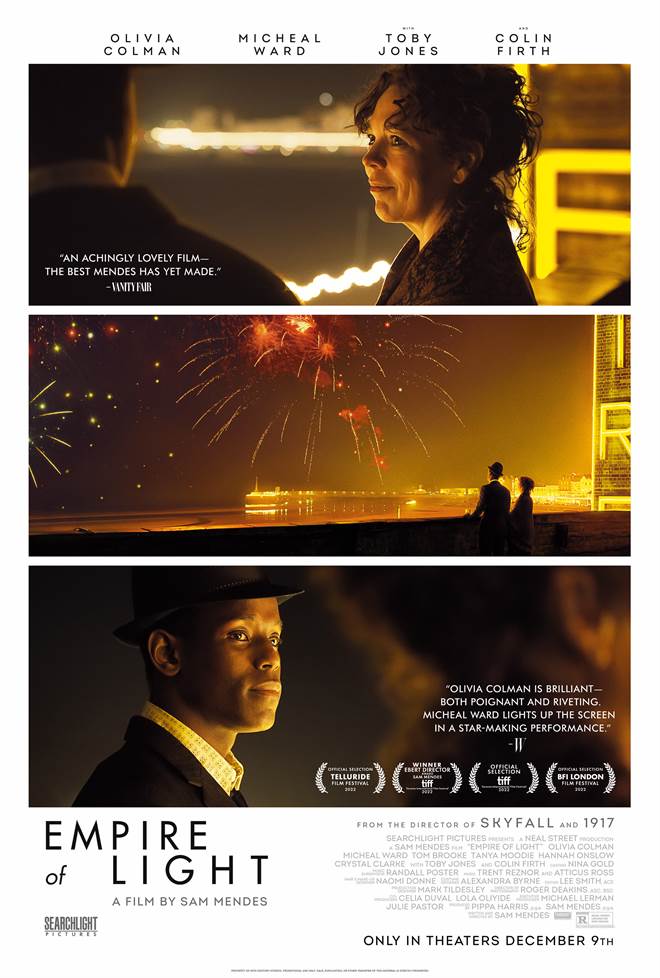 In his almost thirty-year directorial career, Sam Mendes (American Beauty) has been involved with many, outstanding, dramatic productions and one or two 007 Bond films. Two of the most recent movies he also wrote or co-wrote.  The first was 2019's war drama 1917 and the second one, Empire of Light, debuts in theaters this week.   While Mendes has a distinctive style as a filmmaker, his "vision" isn't always straightforward or easily interpreted and even with a terrific cast, he doesn't make the most of their talents leading Empire of Light to be less than appealing and not up to Mendes' usual ability to entertain the audience.

Hilary Small (Olivia Colman; The Favourite) is the Manager at the Empire, an aging movie house in an English Coastal town during the turmoil of 1980s Britain.  Based on her disposition and her weekly meetings with a therapist - not to mention a lithium prescription - it is fairly obvious that Hilary suffers from some mental health issues.  Her boss, theater owner Donald Ellis (Colin Firth; The King's Speech), sexually harasses her, constantly asking her to come to his office to "discuss" some things.  Her lonely existence has her simply "going through the motions" until a new employee, Stephen (Micheal Ward; The Old Guard) comes to the theater.  The two strike up a friendship and eventually a more intimate relationship allowing Hilary to see herself and her life in a whole new light.

Colman is an incredible actor who has only become extremely well-known in the last few years.  Her version of Hilary is mundane and droopy until Stephen comes along and her transformation, if only temporary, is astounding.  Ward is a rising star and his work in Empire of light is just another example of his talent.  Firth is generally very good, even when his character is a jerk.  The supporting cast, especially veteran actor, Toby Jones (Captain America: The First Avenger) and feature film newcomer, Hannah Onslow (This is Going to Hurt) continually make their presence known and complement the story.

The undertone messages in this film - sexual harassment, racism, mental health - serve as backdrops and subplots to the relationship and bond formed between Hilary and Stephen.  Unfortunately, the movie doesn't take a deep dive into any of the topics, merely skimming the surface.  However, Hilary and Stephen touch upon similarities to Harold and Maude's relationship in the 1971 film (though Hilary is more Harold and Stephen is closer to Maude).

As stated earlier, Mendes doesn't make lighthearted fare and, if you haven't guessed already, Empire of Light doesn't have him veering from his norm.  What the film does do is, at least temporarily, is offer some life-affirming introspection and a sense of hope.  However, even that is temporary and can't be sustained for very long.  While Colman, War, and the rest of the cast work with what they are given, the plot doesn't give enough to make the movie one of Mendes' more memorable ones.

One might wonder why Mendes used the title Empire of Light but a good internet search will reveal that its meaning is simply cinema.  Taking it literally, the film mainly takes place in a cinema, philosophically the title could be interpreted as Hilary's "awakening" into the light.  I'm sure there are numerous other meanings one could explore if one wanted to take the time.

Regardless, while Empire of Light boasts a solid cast and a decent story, Mendes has made far superior quality movies in the past.  This one won't win him any awards and won't be among those movies he will be remembered for in the long run.

Empire of Light images are © Focus Features. All Rights Reserved.