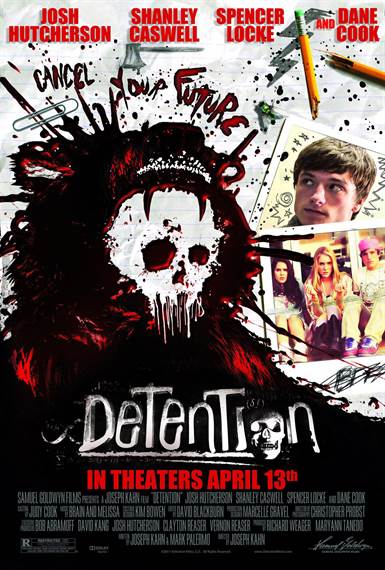 Purchase   DVD/Blu-ray/4K UHD
"Detention" may be where the deconstruction of the high school and slasher movie genre burns all the way through analysis and satire and achieves wrap-around becoming its own thing again.

The film is set in the Town of Grizzly Lake.  It opens with a mean, female cheerleader (a necessary trope) breaking the 4th wall to address the audience.  It is completed by Zombie-Land style numbered sub-titles and over-the-top stereotyping ...until she is suddenly bloodily murdered by the horror-movie stalker who is dressing up as Cinderhella, a slasher from the movies the kids in "Detention" go to watch on the big screen.

The characters cannot decide if dressing up as a movie killer is homage to "Scream" or is just lame.  This alone should tell you a lot about "Detention", and it does; it really only scratches the surface because where "Detention" goes from there is all over the place.

The "weird factor" in Grizzly Lake is turned up to 11 with, although I cannot list everything because it would be giving the script away, let's just say that a character type for a David Cronenberg film is in the cast for no reason, and I can readily explain.  That is far from the weirdest thing you will see in "Detention" too.

The movie looks like it might be a slasher flick; and it does have plenty of gore and dismemberment.  It is a testimony to the craftsmanship of the creators indicating they knew they had to equate "real-life" slashing with what the character Cinderhella does in the movie.  When the characters go and watch it, they find it went way over the top; but really it is a comedy aimed primarily at young adults. The movie is gutsy to keep its R-Rating, as a lot of the people who would probably like to see it may not be able to.

The cast was also for the most part appropriately aged:  Shanley Caswell was 18 and Josh Hutcherson was 17 when filming started.  The dialog is what we have come to expect in a post-Joss Whedon age where kids talk like ultra-articulate hipsters.  It works – but if the snappy patter gives you problems with disbelief, how did you make it past the opening credits?

It is funny, fast paced, over the top, in a few cases really shocking and only slightly mean-spirited in some places.  No, it really doesn't make a whole lot of sense, but how could it?  Detention is about the ride, and it takes off with a jackrabbit start and doesn't slow down until the credits roll.  I would like to call out Josh Hutcherson who you'll know from "The Hunger Games".  He is charismatic, is going to be a big star; but he wasn't when "Detention" was filmed.  At least I don't think so compared to what he is now -- I liked him since "Zathura".  He has got plenty of charisma, and it shines in Detention.

Shanley Caswell, the put-upon, more-or-less main character, also does a great job. She has to carry some scenes that were probably bizarre to read through and somehow manages to make the utterly-unbelievable action look pretty natural.

If I have a final comment, it'll be a mild spoiler so you might want to stop here.

We have seen with "HotTub Time Machine" that the 80's (and now, with "Back to the Future") the 90's are "the past".  When characters go back, we, the audience either feel nostalgia ("HotTub") because we lived through it; or shock ("Detention") because we were growing up during it.  "Detention" is written for the 20-year olds.  As a 40 year-old, I said to myself, "man, I'm OLD."  However, it was a good feeling anyway.

Download Detention in Digital HD/4K from the iTunes store.