American Animals is the unbelievable but entirely true story of four young men who attempt to execute one of the most audacious art heists in U.S. history. The film centers around two friends from the middle-class suburbs of Lexington, Kentucky. Spencer (Barry Keoghan), is determined to become an artist but feels he lacks the essential ingredient that unites all great artists – suffering. His closest friend, Warren (Evan Peters), has also been raised to believe that his life will be special, and that he will be unique in some way. But as they leave the suburbs for universities in the same town, the realities of adult life begin to dawn on them and with that, the realization that their lives may in fact never be important or special in any way. Determined to live lives that are out of the ordinary, they plan the brazen theft of some of the world’s most valuable books from the special collections room of Spencer's college library. Enlisting two more friends, accountancy major Eric (Jared Abrahamson) and fitness fanatic Chas (Blake Jenner), and taking their cues from heist movies, the gang meticulously plots the theft and subsequent fence of the stolen artworks. Although some of the group begin to have second thoughts, they discover that the plan has seemingly taken on a life of its own. Unfolding from multiple perspectives, and innovatively incorporating the real-life figures at the heart of the story, writer-director Bart Layton (The Imposter) takes the heist movie into bold new territory.

Download American Animals in Digital HD/4K from the iTunes store.

American Animals images are © The Orchard. All Rights Reserved. 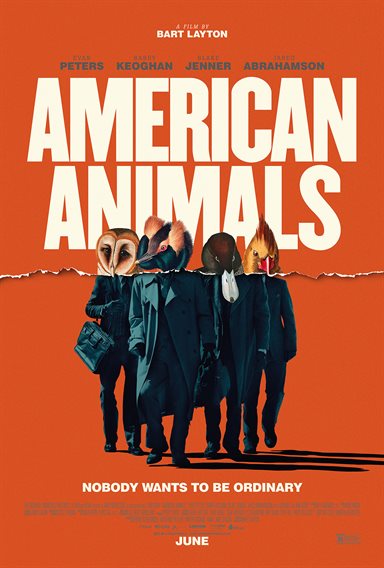 Why is it movies about heists always make it seem so easy as if anyone could rob a bank or armored car?  It promotes a false sense of hope as well thought out plans seem to go off without a hitch (well not always but you know what I mean).  It's not surprising then that four College kids decided, planned and executed a heist to steal valuable artifacts from the special collections library at Transylvania University in Kentucky. Unfortunately, unlike the movies, theirs was an imperfect plan that landed them in jail for the next seven years and had them labeled as convicted felons for the rest of their lives. Their story is chronicled in the new drama American Animals.

Spencer Reinhard (Barry Keoghan; Dunkirk) grew up in a nice neighborhood in Kentucky and went to college as expected.  Along the way, he became friends with Warren Lipka (Evan Peters; American Horror Story) who was a bit more of a troublemaker.  When Spencer told Warren about the rare books housed in his school's library the two wondered what it would take to steal and sell them.  They thought about how rich they would be and what they could do with all that money…and then they started to plan.

Realizing they needed additional help they enlisted Eric Borsuk (Jared Abrahamson; Travelers) and Chas Allen (Blake Jenner; Glee) and the foursome plotted every detail of their heist.  Of course, there were complications.  Their plan to subdue the lone librarian, Betty Jean "BJ' Gooch (Ann Dowd; The Handmaid's Tale), with a taser didn't work and the books were heavier than they anticipated.  Their escape was hindered when the outside door in the basement of the building was nowhere to be found and their idea to take the books to New York to get authenticated for sale was thwarted when the appraiser wasn't there when they arrived.  Everything fell apart and they were eventually arrested.  A fantastical story for sure, except that it is true!

The actors do a terrific job portraying the middle-class college students who steal the books but the treats of this film are the moments in between the acting. Writer/Director Bart Layton (The Imposter) smartly infuses the film with interviews with the real-life perpetrators who tell their story from their perspectives.  The movie in this regard comes off as a television show where the parties involved tell the stories and actors dramatize the events – only must better done in this case. While Peters, Keoghan, Abrahamson and Jenner are enjoyable to watch, listening to Reinhard, LIpka, Borsuk, and Allen is fascinating.

The film moves at a good pace and the interchange between the dramatization and the real-life interviews flows well.  Neither jolts the audience out of the film which is good because it could it have come off disjointed but doesn't.  Of course, the subject matter is somewhat disheartening and infuriating but watching as a witness to see how their minds work is interesting and entertaining.  Of course, the real BJ Gooch says it best when she describes them as selfish though they don't come across as spoiled as they could have and that is in part due to Layton's writing.

These handsome, intelligent men evoke a level of sympathy as they tell their story while still enraging the audience to think they had the audacity to try and pull off a crime at all.  The film is entertaining while answering the question most people have thought about at one time or another in their lives…If I tried to commit a crime, could I get away with it?  In this case the answer is no and these men paid for it in more ways than just seven years of their freedom.  Makes you think…doesn't it?