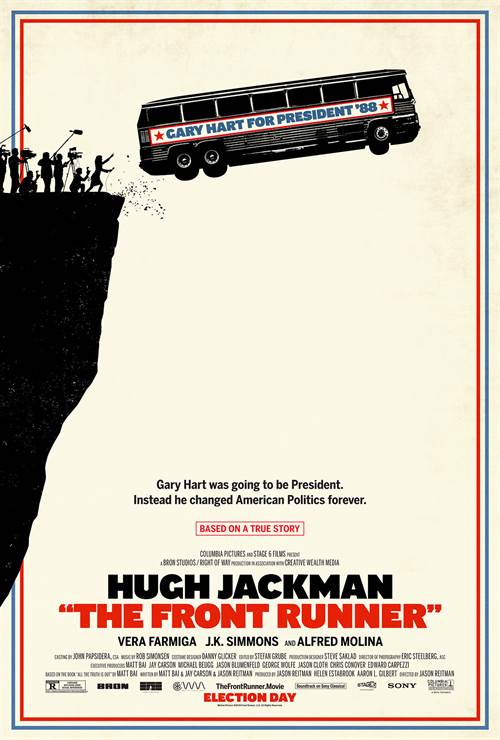 Oscar (R) nominee Hugh Jackman stars as the charismatic politician Gary Hart for Academy Award (R)-nominated director Jason Reitman in the new thrilling drama The Front Runner. The film follows the rise and fall of Senator Hart, who captured the imagination of young voters and was considered the overwhelming front runner for the 1988 Democratic presidential nomination when his campaign was sidelined by the story of an extramarital relationship with Donna Rice. As tabloid journalism and political journalism merged for the first time, Senator Hart was forced to drop out of the race - events that left a profound and lasting impact on American politics and the world stage.

Stream The Front Runner in Digital HD/4K from the AppleTV store.

The Front Runner images are © Columbia Pictures. All Rights Reserved. 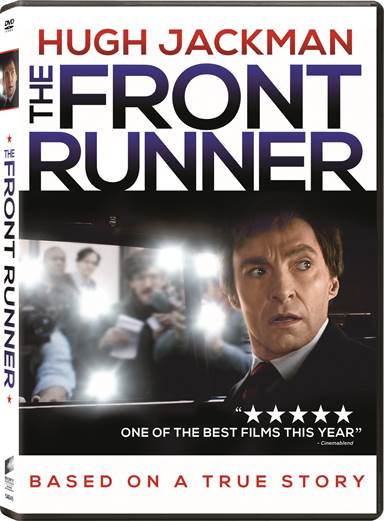 There was always an unwritten rule in Washington, D.C. that when it came to philandering politicians the media looked the other way. John F. Kennedy, Lyndon B. Johnson, etc were rumored to have mistresses but they were never talked about or reported on while these men held the highest political position in the world.  That all changed when the 24-hour news cycle hit in the 1980s.

From that point on anyone in the public eye – musicians, actors, professional athletes, and politicians – have been watched and scrutinized down to every minute detail.  Ironically, what was a scandal back in 1988 is now considered "par for the course" in the political world and if Gary Hart was running for president now he might have a better shot at winning than he did in 1988.  Unfortunately, for him, that was not the case back then.  The Front Runner is the story of his brief 3 weeks as the lead candidate for the next President of the United States.

Gary Hart (Hugh Jackman; The Greatest Showman) was a junior senator from Colorado when he announced his intention to run for president in 1984.  He was ultimately defeated by Walter Mondale for the Democratic nomination and returned to Colorado.  In April 1987, Hart once again announced his candidacy, as he was an extremely strong choice for the party.  Many believed, even that early on, that he would become President.  He was intelligent, good looking, had strong ideas and ideals and was considered the best choice.  On May 8, 1987, a mere three weeks after he announced his intentions to run for President, Gary Hart was out of the race for good amidst growing scandal.

There had been marital issues in the past for the Harts. Gary and Lee (Vera Farmiga; Bates Motel) had been separated at one point but eventually got back together.  When asked about the separation by a New York Times reporter (RJ Brown; 13 Reasons Why) Hart was annoyed and said, "Follow me around. I don't care. I'm serious. If anybody wants to put a tail on me, go ahead. They'll be very bored".  On the same day, that quote appeared in the Times, The Miami Herald posted an article about a young woman having spent the weekend in Hart's D.C. townhouse with him.  That was the beginning of the end for him.  While he first tried to ignore the whole incident, denying Donna Rice (Sarah Paxton; The Last House on the Left) was his mistress, the issue simply wouldn't go away as Hart had hoped.

Jackman is a versatile actor so I'm sure there was confidence that he could play the charismatic politician well.  However, even with the bad hair job I still felt as if I was watching Jackman but maybe that has more to do with the script and director than the actor himself.  Farmiga, on the other hand, disappeared into her role as Hart's wife.  J.K. Simmons (Whiplash) is also excellent as Hart's campaign manager, Bill Dixon.

The Blu-ray 1080p video presentation is solid with little artifcating and a full-color palette.  Any graininess here I am sure is intentional to give the impression that the events are happening in the 1980s.  The DTS-HD Master audio 5.1 matches the tone of the video well with dialogue sitting comfortably in the center channel.  The Blu-ray does offer much in the way of extras and to be honest, I was a little disappointed that they didn't offer more about the real-life Hart or have any of the real people commenting on the incidents or the production.  The extras include: Audio Commentary, The Unmaking of a Candidate, Deleted scenes and Previews.

While The Front Runner is a commentary on how this incident changed journalism forever, it is also a story with which many of us are already familiar.  I felt it tried to make the audience feel sympathetic towards Hart but to be honest the man himself didn't help his cause by declining to comment on what happened instead of apologizing and moving on.  Perhaps if he had, he might have been one of our greatest presidents instead of the punch line for many jokes.