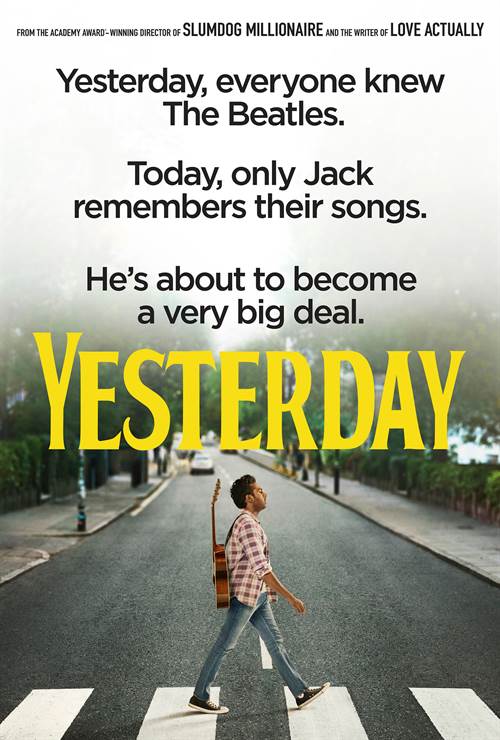 Yesterday, everyone knew The Beatles. Today, only Jack remembers their songs. He’s about to become a very big deal. From Academy Award®-winning director Danny Boyle (Slumdog Millionaire, Trainspotting, 28 Days Later) and Richard Curtis, the Oscar-nominated screenwriter of Four Weddings and a Funeral, Love Actually and Notting Hill, comes a rock-n-roll comedy about music, dreams, friendship, and the long and winding road that leads to the love of your life.

Jack Malik (Himesh Patel, BBC’s Eastenders) is a struggling singer-songwriter in a tiny English seaside town whose dreams of fame are rapidly fading, despite the fierce devotion and support of his childhood best friend, Ellie (Lily James, Mamma Mia! Here We Go Again). Then, after a freak bus accident during a mysterious global blackout, Jack wakes up to discover that The Beatles have never existed … and he finds himself with a very complicated problem, indeed.

Performing songs by the greatest band in history to a world that has never heard them, and with a little help from his steel-hearted American agent, Debra (Emmy winner Kate McKinnon), Jack’s fame explodes. But as his star rises, he risks losing Ellie — the one person who always believed in him. With the door between his old life and his new closing, Jack will need to get back to where he once belonged and prove that all you need is love.

Stream Yesterday in Digital HD/4K from the AppleTV store.

Listen to the Yesterday soundtrack on Apple Music.


Win Passes For 2 To An Advance Screening of Universal Pictures' ...  6/19/2019 10:31 AM EST
What if the Beatles never existed… John, Paul, George, and Ringo  - the "fab four"?  Would you want to live in a world without their music?  What if, in one freaky night, no one remembered them or their songs…besides Jack (Himesh Patel, Eastenders)?  The new movie from Universal Pictures, YESTERDAY, explores that very idea and they, in conjunction with FlickDirect, would like to give some lucky wi...  More>> 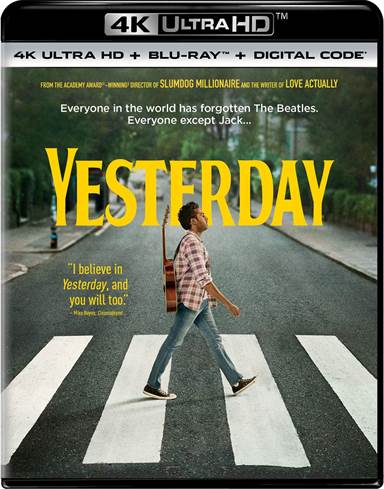 Everyone knows who The Beatles are. Young or old, you have heard a song of theirs. They are an iconic part of not only music history but a huge part of cultural history. Again, ICONIC. But what if we lived in a world where they didn't exist? What if you were the only person who knew that this prolific band ever existed? Would you use this knowledge to gain fame and riches, performing their songs and claiming them as your own? In Yesterday, we see this very scenario play out and, now, you can purchase this title for your home entertainment collection.

Jack Malik (Himesh Patel; EastEnders) is a musician and songwriter whose day job is working at a big warehouse store. His manager is Ellie Appleton (Lily James; Baby Driver) who is a big believer in Jack's music. However, Jack has struggled for years to achieve his dream and decides that he is going to give it up and go back to teaching. After leaving a gig, Jack is riding his bicycle home when the power goes out - all over the world. The outage lasts 12 seconds and happens at the same exact time as he is hit by a bus, suffering minor injuries including losing two teeth.

After his release from the hospital, Ellie buys him a new guitar. He begins to play and sing "Yesterday" by The Beatles. His friends act as if they have no idea what the song is and Jack thinks they are goofing on him. After a little while, though, Jack realizes that something is off and Googles The Beatles. To his astonishment, not one thing was on the internet about the band. It appears that he is the only person who remembers them. He takes their songs as his own and becomes a phenomenon. He soon learns, however, that his dream of fame is quickly losing its luster.

Aside from Himesh Patel and Lily James, the film also features Kate McKinnon (Ghostbusters) and Ed Sheeran. Kate is always fun to watch on screen and Ed helps add a nice layer to the film. The stars of the film are, of course, Patel and James. Not only was Patel's acting a delight to watch but so was his singing. Lily James is flawless as ever portraying the bubbly, yet heartfelt, teacher/manager.

The video quality is 2160p high definition with a 2.39:1 aspect ratio. The picture is exceptional as the minutest details can be ascertained with the naked eye.  Colors are vibrant and black tones are deep and true.  The Dolby Atmos highlights the soundtrack beautifully offering depth to all the classic Beatles songs sung expertly by Patel.  Dialogue is nicely mixed and not overpowered by the music.

Special features included in this release are:

Overall, this film was a bit of a surprise for me. I definitely enjoyed it more than I thought I would and even though the plot was a unique one, the film still fell back on a lot of overused romantic storylines. That being said, it is absolutely worth a watch, especially if you are a Beatles fan (though that's not a requirement).