Featuring a wildly entertaining mix of dynamic action and dark humor, COLD PURSUIT stars Liam Neeson as Nels Coxman, a snowplow driver whose quiet family life is upended after his son's murder. Nels begins a vengeful hunt for Viking, the drug lord he holds responsible for the killing, eliminating Viking's associates one by one. As Nels draws closer to Viking, his actions bring even more unexpected and violent consequences, as he proves that revenge is all in the execution.

Download Cold Pursuit in Digital HD/4K from the iTunes store. 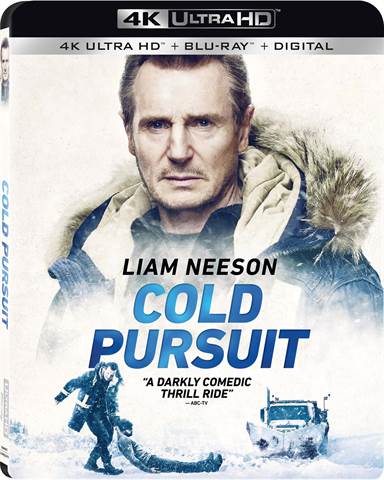 Liam Neeson has certainly carved out a niche for himself in the entertainment world as the dad seeking revenge for his child being harmed/wronged. In 2008's Taken, he proved that messing with his kid could have biblical repercussions for those responsible. Now, in the black comedy Cold Pursuit, available now on 4K UHD Blu-ray, Neeson continues this pattern, playing a man who seeks revenge on a drug cartel responsible for his son's death.

Neeson plays Nelson "Nels" Coxman, a snowplow driver at an upscale Colorado resort, Kehoe. He is a valued member of the community, earning the  "Citizen of the Year" award. However, his life is turned upside down when he is informed that his son has died from a drug overdose. Coxman and his wife, Grace (Laura Dern; Jurrasic Park), wind up separating after the tragic loss and he becomes suicidal. He decides to end his life but his plans change once he finds out that his son had, in fact, been killed by a drug cartel. The news gives him a new sense of purpose - killing those involved with his son's death. Enlisting the help of his brother, Brock "Wingman" Coxman (William Forsythe; Halloween) who used to be an enforcer for the local cartel, Nels hunts down those responsible and creates a bigger situation than originally intended.

This film is a remake of  "In Order of Disappearance", a Norwegian film that starred Stellan Skarsgard (The Avengers) and was directed by the same director, Hans Petter Moland. This updated version of the film is definitely entertaining and we get some good performances from a cast of talented actors. Joining Neeson, Dern, and Forsythe in the film are Emmy Rossum (Shameless), Tom Bateman (Jekyll and Hyde), and Julia Jones (Westworld), as well as other actors to round out the supporting cast.

The film tried really hard to work as a dark comedy a la Fargo, but it just didn't seem to capture the same spark and after about an hour, it just seemed like another by-the-numbers-film.  The first act really grabbed my attention and showed promise but couldn't keep up the momentum which ultimately was a little disappointing.

Cold Pursuit is in presented in 2160p in its original theatrical aspect ratio of 2.39:1. While the film appears to be finished in 2K, the HDR and Dolby Vision combined increase some of the depth and clarity in some of the dark scenes as well as add more overall depth of field to the film. The Dolby Atmos soundtrack on this release is very well done. The dialog is crisp and clear while the special effects are relegated to the surround speakers. However, height spacial features of the film are not as prominent as in other recent releases.  Overall a decent transfer but I've heard and seen better.

There are only a few extras in this combo pack, which is also a little disappointing.  They Include:

Overall, while this wasn't as good as some of Neeson's other action films it was a quirky dark film that brought you on an entertaining ride for a couple of hours. If you are a Neeson action fan you will be satisfied in the long run.