Ed Hemsler spends his life preparing for a disaster that may never come. Ronnie Meisner spends her life shopping for things she may never use. In a small town somewhere in America, these two people will try to find love while trying not to get lost in each other's stuff.

Download Tomorrow Man in Digital HD/4K from the iTunes store. 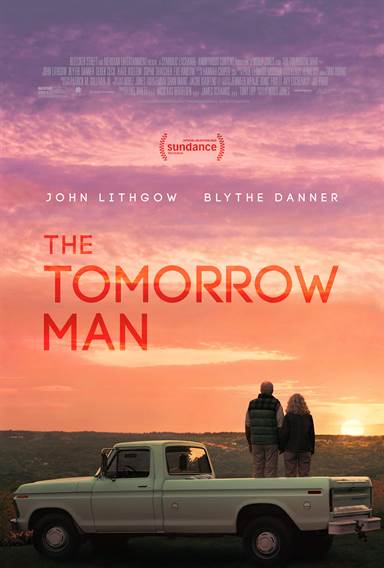 Once upon a time I actually thought great actors and great acting could make any film work. Then, I grew up and figured out that only a great story can make a film great, no matter how good the actors in it may be. Without a compelling script that captures the audience from the start and continues to hold them through to the end, all you're left with is wondering where is this story going and will it ever get there?

Such is the case with "The Tomorrow Man". You have two brilliant actors, locked in some trumped-up concoction of characters, who have no possibility of being remotely real, in search of a compelling story that doesn't exist.

That's it, that's all that's here. It's just a mundane, elongated kind of "Twilight Zone" episode, that's so far fetched and so painfully boring that it's hard to stay awake through the whole thing. And, if you do make it all the way through to the ‘surprise ending', you'll realize the fact I stated before, that great actors and great acting are never enough to make a bad story acceptable.

Lonely Ed notices lonely Ronnie's shopping habits and mistakenly determines that she, like himself, is also preparing for the end of the world. So, he devises a way to meet and engage her in conversation; talking is something he does incessantly, while on the other hand, she likes listening better.

It's a match made in movie heaven, but can they become friends and then overcome the complexities of each other's baggage to find enough trust and acceptance to get down to a real love affair?

This is Noble Jones' first feature film and it shows. His pacing is deadly slow, his camerawork ranges from film school slick to meaningless long shot, and he uses his actors disappointingly. As to the cast, all are uniformly decent, with of course Lithgow and Danner delivering the stand out performances you'd expect.

My take… I hate to see good actors relegated to working in poor films. This is a poor film, wait to see it on the TV, if you're interested, if it ever gets there.