When a new menace in Gotham begins stealing all the experimental technology, Batman is put on high alert. But a team of warriors lurking beneath the streets are also on the case: the Teenage Mutant Ninja Turtles! Led by Leonardo and along with his brothers, the brainy Donatello, fearless Raphael and wisecracking Michelangelo, these mysterious martial artists are on a collision course with the Dark Knight. Based on the hit DC Comics crossover, it’s time for a high flying, pulse pounding adventure the likes of which Gotham City has never seen! 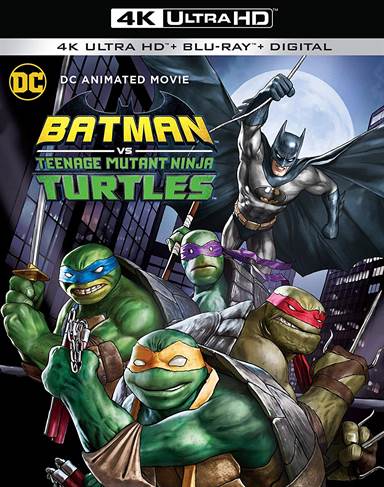 In today's world of combining big acts for even bigger theatrics, this delightful pairing of the stoic Batman and the fun-loving Teenage Mutant Ninja Turtles is sure to entertain fans both new and old. While admittedly initially dubious upon hearing the premise, I found the film very clever and enjoyable. The dialogue and action scenes are very well written and animated, and what could have been just a gimmick has become a legitimately engaging film. Even the plot of Batman vs. Teenage Mutant Ninja Turtles does not disappoint.

The film opens with the Foot Clan stealing a major piece of technology from a laboratory in the presence of Barbara Gordon, who relays the news of the presence of four curious creatures to Batman. The Turtles are in Gotham to stop Shredder and his clan and to determine the identity of his new ally. While defending Wayne Enterprises from the clan, Batman is injured by Shredder, and the Turtles fend off the Penguin before encountering each other. Batman shows the youngsters a few of his tricks that lead to their defeat. Ultimately learning that they are on the same team, Batman, his crew and the Turtles set out to stop the Shredder, Ra's al Ghul, The Joker and other familiar villains from infecting the city's residents by turning them into mutants and destroying Gotham. The villains (and even Batman himself) become unimaginable creatures set to cause destruction upon being injected by this venom. The heroes certainly have their work cut out for them, and this pairing of beings from two different universes must be up to the task.

Fast-paced and engaging, director Jake Castorena and his team do a terrific job of combining clever dialogue, an engaging storyline and aesthetically pleasing action sequences to keep the viewer engrossed. Michaelangelo does his part to provide comic relief (his comparison and contrast of Gotham to New York brought a belly-laugh). The fight sequences highlight the contrast of Batman's grace and the Turtles' occasional clumsiness. There are some superhuman Matrix-inspired moves that come across as very satisfying. The Turtles' reaction upon seeing the Batmobile for the first time was as priceless as would be the reaction of any teenage boy (or grown man, for that matter). Despite the simplicity of the Turtles' facial animation, their emotions and identities come through clearly (another contrast from Batman).

Not having followed them since my youth, it was easy to tell who was whom. The cameos of several villains (Two-Face and Harley Quinn among others) certainly make for an interesting dynamic and adds to the rapid pace. And of course, I never thought I'd see Batman at a pizza party.

The 4K 2160p video quality is exceptional on this release.  Colors pop off the screen and the animation can truly be appreciated in this format.  The DTS-HD Master Audio 5.1 is also strong as sound effects surround the viewer from all sides. The extras, while decent in length, are not plentiful.  They include Cowabunga Batman! When Comic Book Worlds Collide, Fight Night in Gotham,  Sneak Peak at Batman: Hush, and three Trailers - Reign of the Supermen (animated), Justice League vs. The Fatal Five (animated) and Shazam! (live action).

All in all, what could have been a questionable idea really triumphs. If this film could keep a middle-aged man like me engaged...it'll certainly do so for its intended audience. And don't stop watching once the credits roll. More will be revealed.