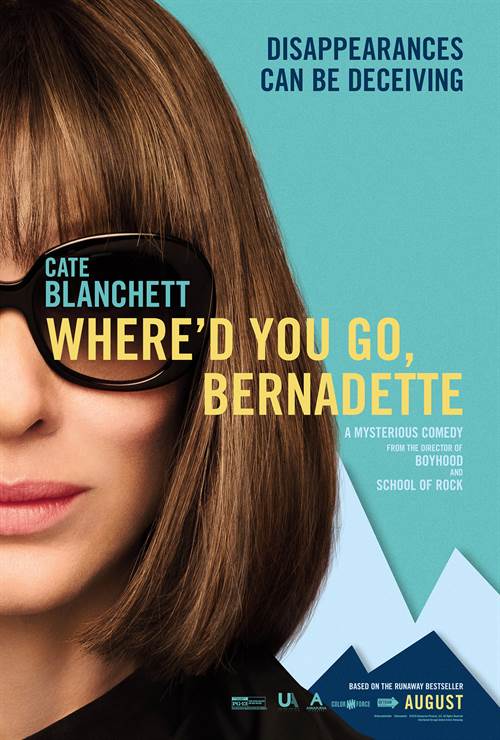 Based on the runaway bestseller, WHERE’D YOU GO, BERNADETTE is an  inspiring comedy about Bernadette Fox (Academy Award winner Cate Blanchett), a loving mom who becomes compelled to reconnect with her creative passions after years of sacrificing herself for her family. Bernadette’s leap of faith takes her on an epic adventure that jump-starts her life and leads to her triumphant rediscovery.

Download Where'd You Go, Bernadette in Digital HD/4K from the iTunes store. 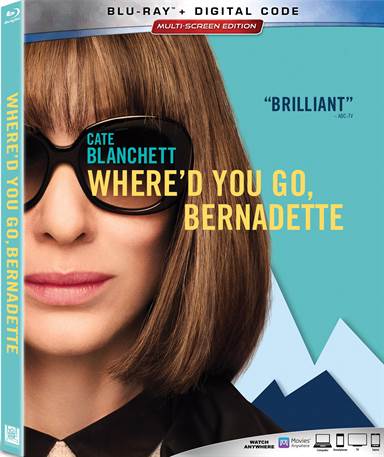 In 2012 Little, Brown and Company published a novel by Maria Semple called Where'd You Go, Bernadette. The book, which sat on the New York Times Bestseller list for a year, is told mostly through correspondence with some narration by Bernadette's teenage daughter Bee thrown in.  Annapurna Pictures bought the film's rights to adapt the story into a feature film.  Four years later with a finished screenplay and casting complete, the movie went into productions and this past summer it finally made its way to theaters.  As we now wind down 2019, Where'd You Go, Bernadette hits stores on Blu-ray and Digital HD.

Bernadette Fox (Cate Blanchette; Blue Jasmine), once a brilliant, award-winning architect, is now an agoraphobic, stay at home mom living with her family in Seattle.  Her daughter, Bee (Emma Nelson; Margaret and the Moon) is her best friend and her workaholic husband, Elgin (Billy Crudup; Big Fish) seems to have grown distant.  As Bee is about to finish her lower schooling with straight A's she reminds her parents ofthe promise they made her  - if she got straight A's she could have anything she wanted.  However, Bernadette loses her mind a little bit when Bee asks for a family trip to Antarctica.

Terrified of going, Bernadette relies on her virtual assistant from India, Manjula, to research and buy appropriate items for the trip.  Sensing her ever-growing fear and erratic behavior, Elgin tries to stage an intervention to get Bernadette to go to therapy but it fails.  When it is revealed that Manjula is really a Russian money scamming ring, Bernadette goes to the bathroom and escapes through the window.  She ends up at her antagonistic neighbor's, Audrey (Kristen Wiig; Bridesmaids), house.  Audrey helps Bernadette to go to Antarctica where she learns about a design project at the South Pole,  Inspired to design again, Bernadette calls Bee and Elgin to ask their permission to work on the project only to discover that they traveled to Antarctica to find her.

Blanchette brings Bernadette to life with a quirky, snarky ambivalence that adds texture to the character.  Crudup is more subdued and plays Elgin as a husband who is just broken down and defeated by his wife's instability.  Nelson is the breath of fresh air between the two adults and seems surprisingly normal despite her parents.  Wiig does a nice job as the annoying, "Martha Stewart - Esque" neighbor whose life isn't as perfect as she makes it seem.

The 1080p resolution video and 1.85:1 aspect ratio makes the visuals stand out.  The Antarctic scenery is especially breathtaking but even the drab and dreary background of rainy Seattle, as well as, the dilapidated home they live in is sharp with plenty of details.  The DTS-HD Master audio 5.1 is also very good with dialogue coming through the center channel clearly.  The combo pack comes with the Blu-ray disc, Digital HD code and about 20 minutes of extras.  The two featurettes are Bringing Bernadette to Life and Who Is Bernadette? plus a photo gallery and the theatrical trailer.

Besides Blanchette's performance, the film doesn't offer as much in the way of entertainment as the novel.  It is mildly interesting but it isn't that much fun watching a grown woman have a breakdown or a family implode.  It's always difficult to adapt a novel into a screenplay because there is so much source material that inevitably details have to be left out and sadly Where's You Go, Bernadette suffers from the loss.  Not a terrible film but not an Oscar-worthy one either.