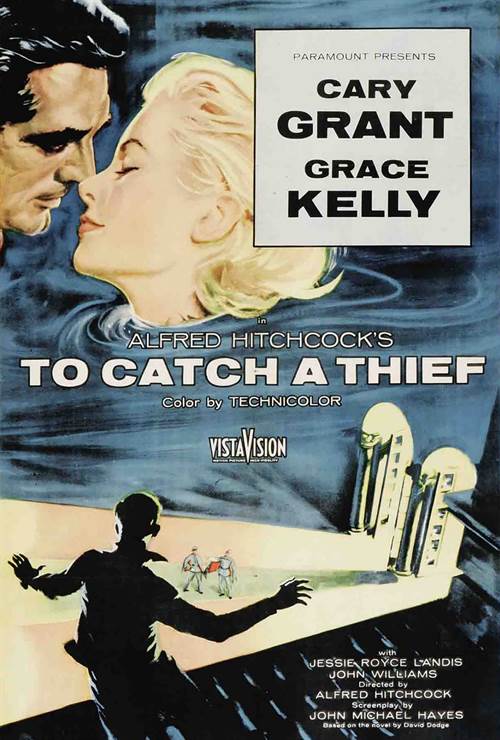 To Catch a Thief Synopsis 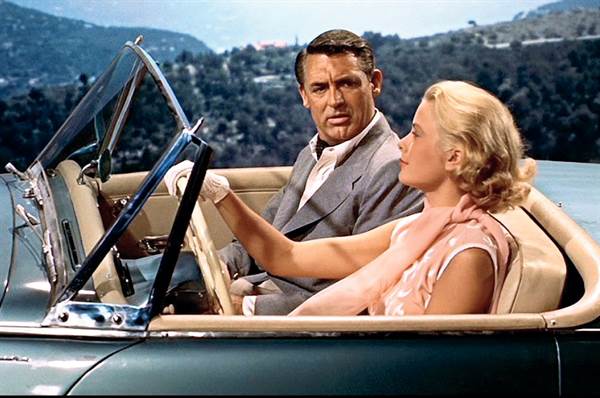 Cary Grant plays John Robie, reformed jewel thief who was once known as "The Cat," in this suspenseful Alfred Hitchcock classic thriller. Robie is suspected of a new rash of gem thefts in the luxury hotels of the French Riviera, and he must set out to clear himself. Meeting pampered heiress Frances (Grace Kelly), he sees a chance to bait the mysterious thief with her mother's (Jessie Royce Landis) fabulous jewels. His plan backfires, however, but France, who believes him guilty, proves her love by helping him escape. In a spine-tingling climax, the real criminal is exposed.

Purchase DVD/Blu-ray/4K UHD physical copy of To Catch a Thief today at Amazon.com

Stream To Catch a Thief in Digital HD/4K from the AppleTV store.

Listen to the To Catch a Thief soundtrack on Apple Music.

To Catch a Thief images are © Paramount Pictures. All Rights Reserved.

To Catch a Thief Blu-ray Review 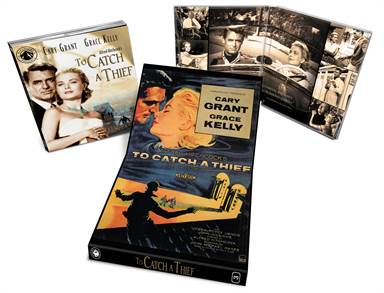 Over one hundred years ago, film producer, Adolph Zukor, took 22 actors and actresses and gave them contracts to work for him and his partners Daniel and Charles Frohman.  Originally called Famous Players Film Company, it later became Paramount Pictures or simply, Paramount.  They have one of the highest-grossing films of all time, Titanic, in their library of thousands of films and they continue to create new feature films every year.

Now, however, they have decided to bring back some of their classic feature films and release them in theaters and on Blu-ray.  Entitled "Paramount Presents", these films have been chosen for their popularity and/or cultural impact at the time of their original release. The first three films in this new line will include Fatal Attraction, King Creole and To Catch a Thief.  All three are out now on Blu-ray transferred from enhanced 4K masters and Fatal Attraction is also scheduled for limited theatrical release later this year.

To Catch a Thief was originally released in 1955,  starred Cary Grant (North By Northwest) and Grace Kelly (Dial M for Murder) and was directed by Alfred Hitchcock (The Birds; Psycho). Filmed on the French Rivera, the movie begins with a series of robberies that all have the familiar modus operandi of a former burglar known as John "The Cat" Robie (Grant).  As the police come to question him, Robie escapes and pretends to be a wealthy lumberman in order to try and find out who really is committing the robberies.

While staying nearby, Robie convinces insurance man H.H.Hughson (Dial M for Murder) to give him a list of the most expensive jewelry owners currently visiting the French Rivera.   He then befriends the top names on the list, Jessie (Jessie Royce Landis; North by Northwest) and Frances (Kelly) Stevens. At first aloof, Frances warms up to Robie and eventually reveals that she knows his real identity.  When her mother's jewels are stolen Frances immediately accuses Robie and he once again escapes so he can look for the real thief.  Securing an invitation to the highly sought after masquerade ball, he hides on the roof of the house waiting to catch the jewel thief, which turns out to be someone he knows.

Grant had a certain suave, debonair appeal, and charming good looks which made him the perfect casting choice for the role of Robie.  Kelly was stunningly beautiful and very talented and she was well cast as the smart and bold Frances.  Despite their twenty five year age difference, these stars had terrific chemistry which is only one part of what makes the film work so well.  Royce is a breath of fresh air as Frances' mother, Jessie, and she offers some of the funnier lines in the movie. Brigitte Auber (The Man in the Iron Mask) has a great supporting role as Danielle, the daughter of Robie's old friend who helps him elude the police.

The Blu-ray quality of this older film is excellent with sharp details and magnificent colors (the scene in the flower market particularly stands out).  It's hard to imagine a movie that is sixty-five years old could look that good but it really does.  The Dolby TrueHD 5.1 audio doesn't fare quite as well as the mix of dialogue and ambient noise is out of balance and I kept having to adjust the volume.  The disc only offers 3 extras that are short which are the previously released Behind the Gates Cary Grant and Grace Kelly and Original Theatrical Trailer and the new addition, Filmmaker Focus: Leonard Maltin on To Catch a Thief.

For Hitchcock, this was one of his more lighthearted films and didn't have the same gravitas as some of his other features like The Birds, Psycho, North by Northwest, etc.  However, he manages to make a wonderful story starring two icons of the silver screen, Grant and Kelly.

To Catch A Thief is a classic that deserves to be in any film buff's library.