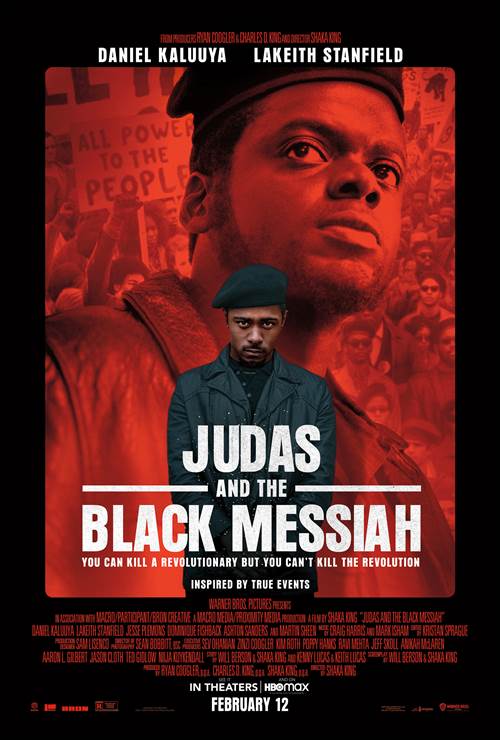 Judas and the Black Messiah Synopsis 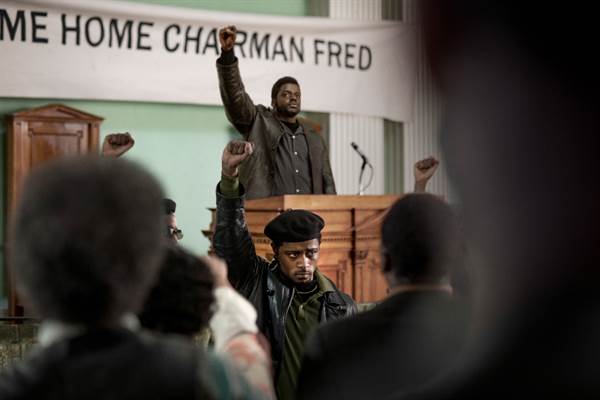 Chairman Fred Hampton was 21 years old when he was assassinated by the FBI, who coerced a petty criminal named William O’Neal to help them silence him and the Black Panther Party.  But they could not kill Fred Hampton’s legacy and, 50 years later, his words still echo…louder than ever.

I am a revolutionary!

In 1968, a young, charismatic activist named Fred Hampton became Chairman of the Illinois chapter of the Black Panther Party, who were fighting for freedom, the power to determine the destiny of the Black community, and an end to police brutality and the slaughter of Black people.

Chairman Fred was inspiring a generation to rise up and not back down to oppression, which put him directly in the line of fire of the government, the FBI and the Chicago Police.  But to destroy the revolution, they had to do it from both the outside…and the inside.  Facing prison, William O’Neal is offered a deal by the FBI: if he will infiltrate the Black Panthers and provide intel on Hampton, he will walk free.  O’Neal takes the deal.

Now a comrade in arms in the Black Panther Party, O’Neal lives in fear that his treachery will be discovered even as he rises in the ranks.  But as Hampton’s fiery message draws him in, O’Neal cannot escape the deadly trajectory of his ultimate betrayal.

Though his life was cut short, Fred Hampton’s impact has continued to reverberate.  The government saw the Black Panthers as a militant threat to the status quo and sold that lie to a frightened public in a time of growing civil unrest.  But the perception of the Panthers was not reality.  In inner cities across America, they were providing free breakfasts for children, legal services, medical clinics and research into sickle cell anemia, and political education.  And it was Chairman Fred in Chicago, who, recognizing the power of multicultural unity for a common cause, created the Rainbow Coalition—joining forces with other oppressed peoples in the city to fight for equality and political empowerment.

Stream Judas and the Black Messiah in Digital HD/4K from the AppleTV store.

Listen to the Judas and the Black Messiah soundtrack on Apple Music.

Judas and the Black Messiah images are © Warner Bros.. All Rights Reserved.


Judas and The Black Messiah Fandango Code Contest  2/5/2021 10:32 PM EST
Established in 1966, The Black Panther Party was a polarizing and violent presence in the fight for civil rights.  During that time, Fred Hampton, the chairman of the Illinois chapter was betrayed by a low-level thief who infiltrated the Black Panther organization.  Judas and the Black Messiah, the new biographical drama surrounding the events leading up to Hampton's assassination, has received cr...  More>> 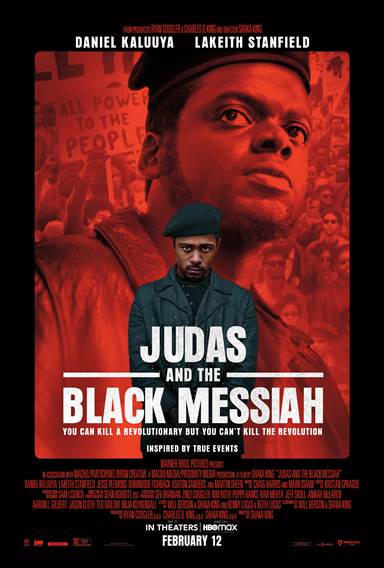 Established in 1966, The Black Panther Party was a polarizing and violent presence in the fight for civil rights.  During that time, Fred Hampton (Daniel Kaluuya; Get Out), the chairman of the Illinois chapter was betrayed by a low-level thief, Bill O'Neal (LaKeith Stanfield; Sorry to Bother You), who infiltrated the Black Panther organization.  Judas and the Black Messiah, the new biographical drama surrounding the events leading up to Hampton's assassination, has received critical praise since it debuted at the 2021 Sundance Film Festival. This week Warner Bros. Pictures will release the film in theaters while it simultaneously premieres on HBO Max.

Based on true events, O'Neal was a small-time car thief who pretended to be an FBI Agent to swindle his targets.  However, when he ended up arrested, the real FBI offered him a deal.  If he would spy on the Black Panthers and Hampton, they wouldn't put him in jail. They would also pay him for information.  O'Neal infiltrated the radical group by starting out as a supporter but gradually he became a trusted member of Hampton's core team.  Even while Hampton was incarcerated, O'Neal, along with others, kept the chapter strong and dealt with members from other states…all of which O'Neal told the FBI, specifically, Agent Roy Mitchell (Jesse Plemons; The Irishman).

Hampton also did something that seemed unlikely.  Instead of fighting other organizations with opposing views, he united them and the Black Panthers in Illinois to fight together against a common enemy…the police.  Called the Rainbow Coalition, Hampton was able to get the Young Patriots and Young Lords organizations to send members to peaceful protests, effectively increasing each group's numbers and their impact.  Seeing Hampton as an increasing threat, an illegal government project, COINTELPRO, was sent to assassinate Hampton.  On December 4, 1969, the Chicago police and FBI agents raided the apartment where Hampton and other Panther members were staying and, using a diagram drawn by O'Neal, found Hampton and shot him in the head twice.

Relative newcomer director Shaka King (Newlyweeds) taps some of today's hot, young talent for this film which helps take the screenplay from very good to great.  Kaluuya has been turning out brilliant performance after performance and his portrayal as the charismatic and intelligent Hampton is more of the same.  Stanfield is solid in almost every part he takes and his casting as O'Neal is an excellent choice.  These two gentlemen balance each other well and neither one overpowers the other.

Plemons also brings his "A-game" to FBI agent Mitchell, who on some level sympathizes with O'Neal's predicament while conversely threatening O'Neal if he doesn't keep spying on Hampton for the FBI.  Dominique Fishback (The Hate U Give) manages to stand out amongst these talented men as she portrays Hampton's girlfriend, Deborah Johnson and veteran actor Martin Sheen (The West Wing) lends his extraordinary talent to a smaller role as J. Edgar Hoover.

The sixties were a tumultuous time in this country and, sadly, not enough has changed in the last fifty years, but King takes us inside O'Neal's and Hampton's world and offers the audience a different view of Hampton and the Black Panthers than we have seen before. King shows us an orator who can captivate an audience, stand up to his enemies without violence and relish in the notion that he would be a father.  Conversely, O'Neal is a scared and squirrely minion as he does Mitchell's bidding in an effort to save his own skin.

Well written, beautifully shot, and peppered with a cast of talented actors, Judas and the Black Messiah is not only engaging and enjoyable but also a cautionary tale of what can happen to incredible young men when they are seen as the criminal but are merely trying to fight against the injustice they face.