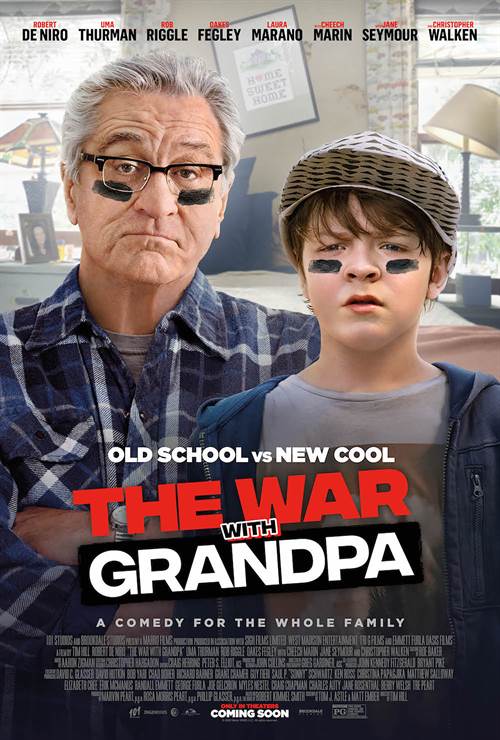 The War With Grandpa Synopsis

Sixth-grader Peter (Oakes Fegley) is pretty much your average kid-he likes gaming, hanging with his friends and his beloved pair of Air Jordans. But when his recently widowed grandfather Ed (Robert De Niro) moves in with Peter's family, the boy is forced to give up his most prized possession of all, his bedroom. Unwilling to let such an injustice stand, Peter devises a series of increasingly elaborate pranks to drive out the interloper, but Grandpa Ed won't go without a fight. Soon, the friendly combatants are engaged in an all-out war with side-splitting consequences.

Purchase DVD/Blu-ray/4K UHD physical copy of The War With Grandpa today at Amazon.com

Stream The War With Grandpa in Digital HD/4K from the AppleTV store.

Listen to the The War With Grandpa soundtrack on Apple Music.

The War With Grandpa images are © Universal Pictures. All Rights Reserved.

The War With Grandpa Theatrical Review 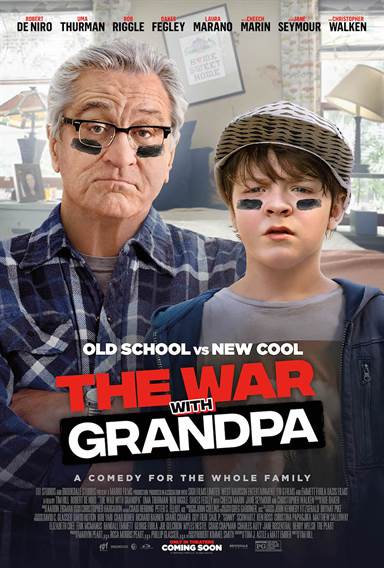 With the ever-growing population and advancements in medicine, people tend to live longer than they did in the past.  This has created the need for more and more nursing homes and assisted living facilities, which seem to spring up constantly (especially where I live in South Florida).  It is rarer these days to find multiple generations of families living under the same roof, as younger individuals seem to be constantly busy and can't/won't take care of the elderly.  They don't seem to want the disruption or hassle of having a parent invade their space and time.  However, when an older parent does move in, it becomes an adjustment for everyone.  This concept is on full display in the new comedy, The War With Grandpa.

Ed (Robert De Niro; Raging Bull) is a widower who lives 2 hours away from his daughter, Sally (Uma Thurman; Kill Bill).  When she comes to visit him because he was arrested for "stealing" groceries (after he couldn't figure out the self-checkout registers), she ends up having a heart to heart with him and decides he needs to move in with her and her family.  Reluctantly, Ed agrees and, while the grandkids are excited to have their grandfather with them, Peter (Oakes Fegley; Pete's Dragon) becomes less than thrilled when he discovers he has to give up his room and movie to the attic.

After a discussion with his friends, Peter decides to declare war on Ed, which Ed finds cute at first until he realizes Peter is completely serious. This is when the pranks begin!  For the next hour, the two go head to head with more complicated and devious ways to "get back at the other person" until, of course, things don't go according to plan and Peter's younger sister, Jennifer's (Poppy Gagnon; Fun Mom Dinner) birthday party gets ruined. Sally is furious. Jennifer is disappointed and Ed and Peter finally realize they need to give their war and learn to live in peace.

In the last few years, the two-time Oscar winning actor De Niro has chosen much lighter roles in comedies such as Dirty Grandpa, The Intern, and, of course, The War with Grandpa.  He proves he has the chops for comedy but also brings a weight and seriousness to these funnier characters, making him the elder statesman in these films.  He is always fantastic, even when the subject matter is lighthearted.  Thurman is fine as her role as mother, daughter, wife and disciplinarian and Rob Riggle (Night School) is a comedic staple and fairs well as Sally's husband who doesn't completely get along with his father-in-law.  Fegley is one of my new favorite young actors who has a great future in film.  He is the perfect complement to De Niro and the two make the film what it is.  Laura Marano (Austin & Ally) plays older sister Mia whose scenes are pretty much forgettable, but Gagnon steals every scene she is in, which is saying a lot since she shares quite a bit of screen time with De Niro.

The War With Grandpa isn't a masterpiece by any means, but it has a good cast and sheds some light on the growing topic of eldercare and family dynamics in 2020.  De Niro brings a sense of legitimacy to the film, along with Christopher Walken (Hairspray), Cheech Marin (From Dusk Till Dawn), and Jane Seymour (Dr. Quinn, Medicine Woman) who portray Ed's "gang" of friends ready to spar with Peter and his friends.  There are a few laughs out loud moments but more than one missed opportunity for other laughs, such as the young vs. old dodgeball game.

While The War With Grandpa is cute, entertaining, and family-friendly, it isn't going to be winning any awards.  If you go into watching the movie with the right mindset and realistic expectations, you will most likely enjoy it.