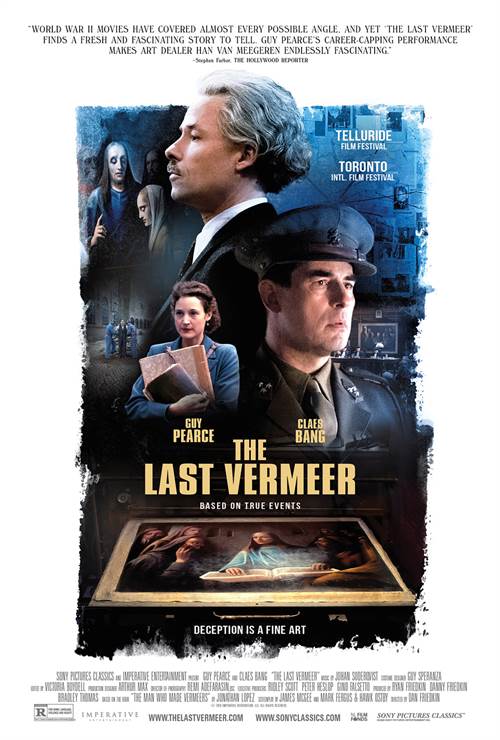 While Joseph Piller (Bang), a Dutch Jew, was fighting in the Resistance during the Second World War, the witty, debonair aesthete, Han van Meegeren (Pearce) was hosting hedonistic soirées and selling Dutch art treasures to Hermann Goring and other top Nazis. Following the war, Piller becomes an investigator assigned the task of identifying and redistributing stolen art, resulting in the flamboyant van Meegeren being accused of collaboration — a crime punishable by death. But, despite mounting evidence, Piller, with the aid of his assistant (Krieps), becomes increasingly convinced of Han's innocence and finds himself in the unlikely position of fighting to save his life.

Stream The Last Vermeer in Digital HD/4K from the AppleTV store.

Listen to the The Last Vermeer soundtrack on Apple Music. 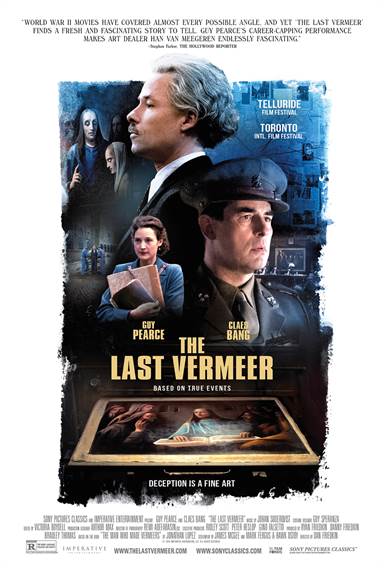 Johannes Vermeer was a Dutch artist who lived in the middle of the 1600s.  While alive, he gained a certain level of regional success but, due to his expensive paint supplies and having a family of eleven children, he died in 1675 leaving his family with a mountain of debt.

Henricus Antonius "Han" Van Meegeren was born almost three centuries after Vermeer and was also a Dutch painter.  He too saw some meager success until art critics claimed his work was "tired and derivative" thus destroying his career.

However, these two artists who, on the surface, seemed to have only their heritage and their artistic ability in common, were more linked than one could ever imagine.  The new film from TriStar Pictures, The Last Vermeer, explains their unlikely connection and how it managed to fool German Nazi, Hermann Goring.

After the end of WWII, Captain Joseph Piller (Claes Bang; The Girl in the Spider's Web) was tasked with trying to recover valuable artwork stolen by the Nazi Regime.  When a train car full of artwork was discovered in a salt mine, a priceless Vermeer painting was found and brought to Piller in Holland.  A bill of sale from Han Van Meegeren (Guy Pierce; Iron Man 3) to Goring accompanies the painting so Piller pays a visit to Van Meegeren to persuade him to give up his sources in the art world.

While Van Meegeren is arrested for selling Dutch national treasures, Piller follows the leads he is given.  As the investigation moves slowly, Piller's assistant makes an astonishing discovery that changes everything.  Through drawings and photos of famous paintings, they discover Van Meegeren wasn't an art dealer with sympathies towards Germany but was, in fact, a brilliant artist who forged paintings and swindled art collectors (including Goring) out of millions of dollars.  Suddenly, Piller found himself defending Van Meegeren who went from being despised by the Dutch people to being heralded as a hero.

Based on a true story, The Last Vermeer is a fascinating look at a complex man who was equal parts talented and devious.  Not only did Van Meegeren deceive one of the highest-ranking Nazis but also Dutch art critics who panned his work earlier in his life.  As revenge goes, his was a pretty great plan.

Pearce is generally the consummate actor regardless of the role but his portrayal of a man considered to be one of the greatest art forgers of the Twentieth Century is impeccable.  He gives Van Meegeren a likeability while offering hints to his sinister side, making the audience want to be his friend while simultaneously knowing they should hate him for being a swindler, who was only out for himself. Bang brings a calmness and a slight naiveté to Piller giving him equal parts sleuth, observer, and a gullible fool.

The film starts off slowly without any dialogue for the first few minutes but picks up speed in the second and third acts.  Director Dan Friedkin, making his directorial debut, may have used this pacing to help add tension to the story, but it simply serves to delay the audiences' investment into the film.  The cinematography, set and costume designs are well done giving an authentic feel to post-war Holland.

It is amazing to think that Van Meegeren managed to fool so many people throughout his lifetime.  It is also ironic that he finally achieved the success and recognition he so desperately sought to have his life end a mere two months later.

The story is intriguing so I can see why it would make great subject matter for a feature film but honestly, it is Pearce's performance that makes The Last Vermeer as interesting and entertaining as it ends up being.