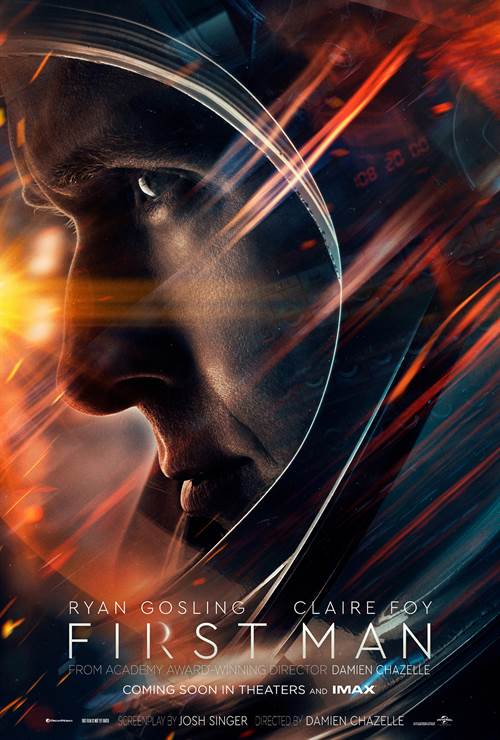 On the heels of their six-time Academy Award®-winning smash, La La Land, Oscar®-winning director Damien Chazelle and star Ryan Gosling reteam for Universal Pictures’ First Man, the riveting story of NASA’s mission to land a man on the moon, focusing on Neil Armstrong and the years 1961-1969. A visceral, first-person account, based on the book by James R. Hansen, the movie will explore the sacrifices and the cost—on Armstrong and on the nation—of one of the most dangerous missions in history.

Stream First Man in Digital HD/4K from the AppleTV store.

Listen to the First Man soundtrack on Apple Music.


Enter For Your Chance To Win a Blu-ray Copy of UNIVERSAL'S FIRST...  1/14/2019 10:00 PM EST
Fifty years ago the United States landed a man on the Moon.  Neil Armstrong and Buzz Aldrin made history with one historic space flight.  Their journey has been the subject of many articles, books, documentaries, television shows, and movies.  This past year Universal Pictures added to that list with their film, FIRST MAN.  IN celebration of the film on 4K, Blu-ray, DVD and Digital Download, Flick...  More>>

Win Complimentary Passes For Two To An Advance Screening of Univ...  10/2/2018 4:08 PM EST
The world seems to have always been fascinated with space exploration and The United States has spent billions of dollars and man-hours propelling humans towards the Moon. We have also made countless movies about the same subject.  The latest film, FIRST MAN,  takes a unique perspective on this topic by recounting Neil Armstrong's adventures in space travel. Universal Pictures, in conjunction with...  More>>

Universal Commemorating NASA Anniversary with Free First Man Scr...  9/26/2018 11:43 AM EST
Universal Pictures is commemorating the 60th Anniversary of NASA with some free early screenings of their upcoming film, First Man. The screenings will take place nationwide on October 1, 2018.First Man is the riveting story behind the first manned mission to the moon, focusing on Neil Armstrong and the decade leading to the historic Apollo 11 flight. Ryan Gosling stars in the film with  Oscar®-wi...  More>> 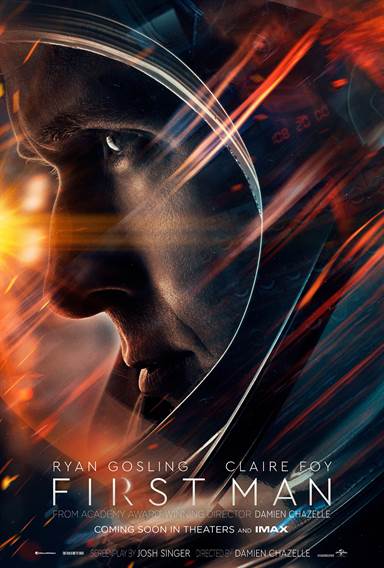 Have you ever wondered what type of person it takes to want to travel into space?  Obviously, they need to be adventurous, brave, intelligent and strong both physically and mentally.  However, Astronauts are made up of a corps of unique individuals who all have their own strengths and weaknesses.  Now imagine what it must have taken to be an astronaut in the early days of the space program when the United States was in a "race" against Russia to be first.  Looking back at that time, one man stands out among the rest…Neil Armstrong.  First Man takes a look at that singular individual as he works tirelessly to help get the US to the point of moon exploration and beyond.

When we meet Neil (Ryan Gosling; La La Land) he is a far cry from the charismatic gentleman the world eventually came to know.  Here he is simply a father watching as his two-year-old daughter get treatment for the brain tumor that would eventually kill her.  He is an aeronautical engineer working for Lewis Flight Propulsion Laboratory in Cleveland, Ohio.  After a series of failed tests results in his grounding he decides to apply for a job with the National Aeronautics and Space Administration.

Once there he became a part of the Gemini program and later Apollo and of course famously became the first man to walk on the moon.  However, in First Man, we see the driven, hardworking, stoic individual who was a father and husband and who seemingly mourned the loss of his daughter for the rest of his life.  We watch as he dutifully accepts his role as commander of Apollo 11 without outward jubilation or shock.  We barely see glimpses of emotion except after funerals – first his daughters and then his colleagues' White (Jason Clarke; Dawn of the Planet of the Apes), Grissom (Shea Whigham; Non-Stop) and Chaffee (Cory Michael Smith; Gotham).

Gosling certainly plays Armstrong extremely reserved almost to the point of non-emotionally altogether.  At one point I began to question if Armstrong might have been on the spectrum, as Gosling's portrayal seemed almost autistic-like.  On the other hand, Claire Foy (The Crown) as his wife, Janet, displays an inner strength with a touch of vulnerability at every turn.  She is alternately scared and brave as she watches her husband take the risks she instinctively knows he was born to take.

Director Damien Chazelle (La La Land) unfortunately is not at his best here.  While his close-ups are plentiful and well placed his propensity for still and lingering shots is misguided.  It is one thing to pause for dramatic effect, it's another to linger far too long on a person or object at rest.  It makes the film feel heavier than it needs to be and elongates the running time of the movie unnecessarily.  AT two hours and twenty minutes the movie seems long for a reason and, in this case, that isn't a good thing.  The many moments of silence linger overly long making the film seem to drag.

The music, however, is a shining spot throughout First Man.  Justin Hurwitz (La La Land) offers a dramatic undertone that sets a feeling and environment that builds to the climactic moment as the men hurtle through space on their way to the moon.  His use of drumbeats accentuates the tension of the scene developing into an explosion of orchestration that is magnificent.  This is one movie that proves the score really does matter.

First Man is dramatic and thoughtful and balances the silence and tension with the lighter moments.  However, Gosling was miscast and Chazelle needed to further edit instead of leaving in too much of not much of anything.  It's an interesting take on The United States Space program in the 1960's and the man that would become revered as an American Hero.