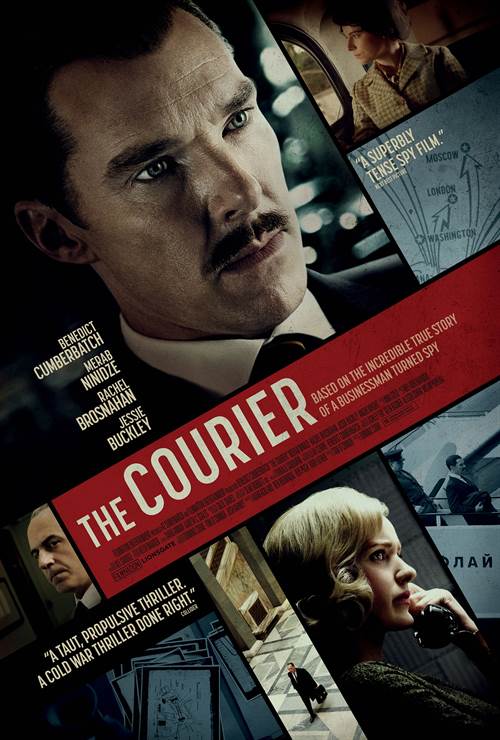 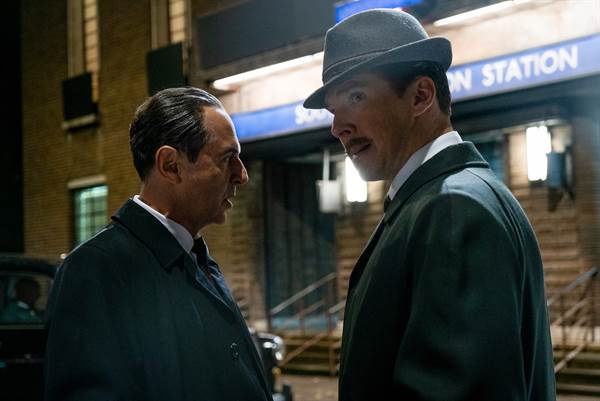 THE COURIER is a true-life spy thriller, the story of an unassuming British businessman Greville Wynne (Benedict Cumberbatch) recruited into one of the greatest international conflicts in history. At the behest of the UK's MI-6 and a CIA operative (Rachel Brosnahan), he forms a covert, dangerous partnership with Soviet officer Oleg Penkovsky (Merab Ninidze) in an effort to provide crucial intelligence needed to prevent a nuclear confrontation and defuse the Cuban Missile Crisis.

The Courier images are © Lionsgate. All Rights Reserved. 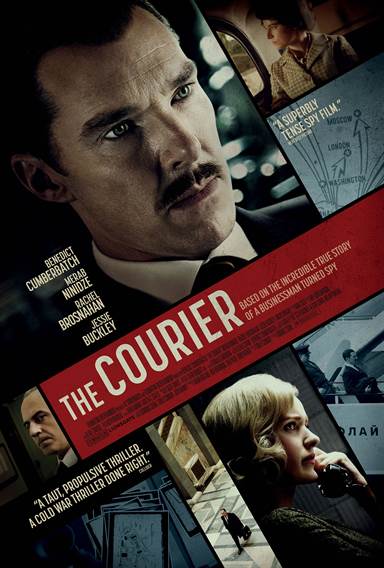 The world has been in an arms race since before World War II.  By 1960, The United States and the Soviet Union were front and center as both countries boasted nuclear weapons at their disposal. The "Cold War" was in full effect and spies from the U.S., Britain, Soviet Union, etc. were working to gather as much information about their enemies as possible.  Russian colonel Oleg Penkovsky (Merab Ninidze; McMafia) was apparently one of those spies, feeding confidential information to the West.  The Courier, a new film by director Dominic Cooke (Follies), is based on Penkovsky's story and his relationship with his MI6 contact, businessman Greville Wynne (Benedict Cumberbatch; Doctor Strange).

Wynne was a successful and unassuming salesman who had been educated as an electrical engineer.  As a businessman, he traveled extensively throughout Eastern Europe.  When Penkovsky contacted American Intelligence, they asked for help from their British counterparts who thought Wynne would be the perfect courier to pass messages and documents back and forth.  Under the ruse of looking to supply Russian Businesses with western parts, Wynne began making several trips to Russia.  Over the next two years, Wynne and Penkovsky would become friends, while Sheila Wynne (Jessie Buckley; Judy), Greville's wife would grow suspicious that her husband was once again cheating on her.

In October of 1962, just as the Cuban Missile Crisis was coming to a head, MI6 and the CIA were putting a plan in the works to help Penkovsky defect.  However, before that could happen Penkovsky and Wynne were both arrested on charges of espionage.  Penkovsky was tried and executed in 1963 while Wynne was sentenced to eight years in Lubyanka prison.  In 1964 Wynne was traded for a Russian spy who was held in England.  After returning home, Wynne returned to his business.  He passed away in 1990 at the age of 70.

Cumberbatch's performance is a striking contrast to his work in The Mauritanian.  In the latter, Cumberbatch is rather limp, like a wet noodle, without any memorable moments whereas in The Courier he travels through a range of emotions.  Ninidze is well cast as the Russian spy and he and Cumberbatch have an ease about them that makes Penkovsky's and Wynne's unlikely friendship believable.  Buckley has become one of my new favorite actors and she seems to take over every scene she is in (in a good way).  Rachel Brosnahan (The Marvelous Mrs. Maisel) is also solid at CIA agent Emily Donovan.

The fact that The Courier is based on real-life events makes the story more interesting and I'm sure those who remember the tensions between the U.S. and the Soviet Union, as well as the Cuban Missile Crisis will be much more invested in the film.  As a spy thriller, the movie is merely ok.  The first two acts are rather bland building up to the more exciting and anxiety-filled third act.  Director Cooke utilizes some interesting camera angles but lets the pace languish for most of the film.

The action is minimal and deals more with the chase than any actual fighting or gun violence and the script is well written for the most part.  It is a shame The Courier isn't more engaging from the beginning because audiences might not stick with it to get to the dramatic conclusion (which I'd be willing to bet didn't actually happen in real life).  Don't get me wrong, the slow burn the viewer has to sit through to get to the payoff at the end is decent enough but the movie is just missing that hook to draw one in from the start. 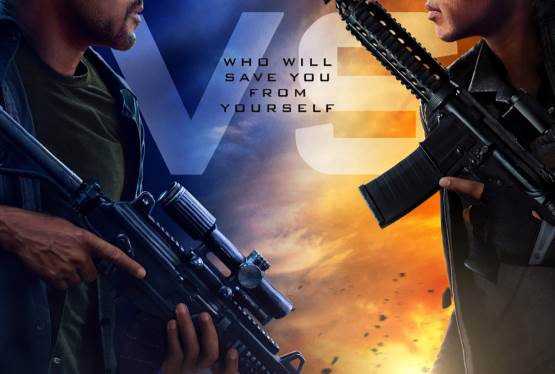 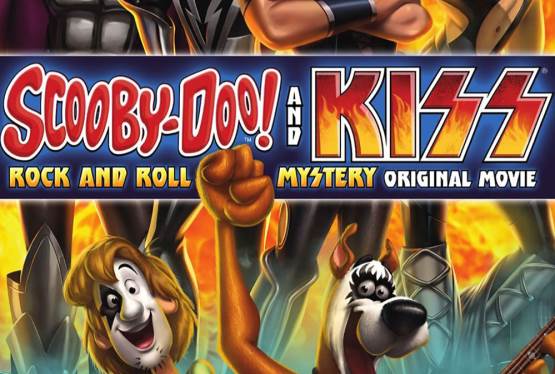