Home / Movie Database / The Mitchells vs. The Machines 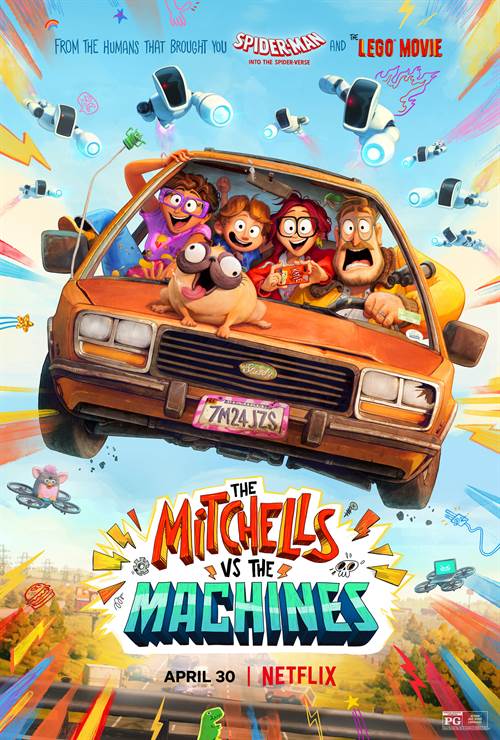 The Mitchells vs. The Machines Synopsis 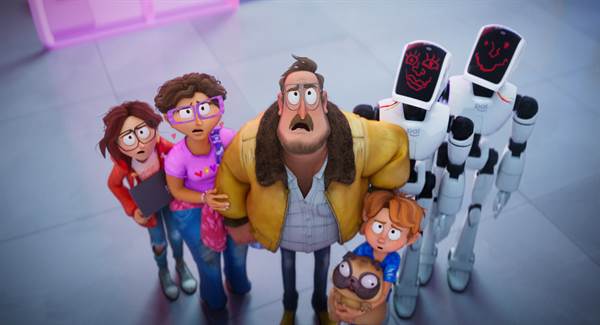 From the humans who brought you the Academy Award-winning Spider-Man: Into the Spider-Verse and The LEGO Movie comes The Mitchells vs. The Machines, an animated action-comedy about an ordinary family who find themselves in the middle of their biggest family challenge yet…saving the world from the robot apocalypse. No big deal, right? It all starts when creative outsider Katie Mitchell is accepted into the film school of her dreams and is eager to leave home and find “her people,” when her nature-loving dad insists on having the whole family drive her to school and bond during one last totally-not-awkward-or-forced road trip. But just when the trip can’t get any worse, the family suddenly finds itself in the middle of the robot uprising! Everything from smart phones, to roombas, to evil Furbys are employed to capture every human on the planet. Now it’s up to the Mitchells, including upbeat mom Linda, quirky little brother Aaron, their squishy pug, Monchi, and two friendly, but simple-minded robots to save humanity. Directed by Michael Rianda (Gravity Falls), produced by Oscar winners Phil Lord and Chris Miller, and Kurt Albrecht, and featuring the voices of Abbi Jacobson, Danny McBride, Maya Rudolph, Beck Bennett, Fred Armisen, Eric Andre, and Oscar winner Olivia Colman, The Mitchells vs. The Machines is about embracing the things that make us unique, learning what it means to be human in a world increasingly filled with technology, and holding tight to the people most important to you when the unexpected hits.

Purchase DVD/Blu-ray/4K UHD physical copy of The Mitchells vs. The Machines today at Amazon.com

Stream The Mitchells vs. The Machines in Digital HD/4K from the AppleTV store.

Listen to the The Mitchells vs. The Machines soundtrack on Apple Music.

The Mitchells vs. The Machines images are © Netflix / Columbia Pictures. All Rights Reserved.

The Mitchells vs. The Machines Review 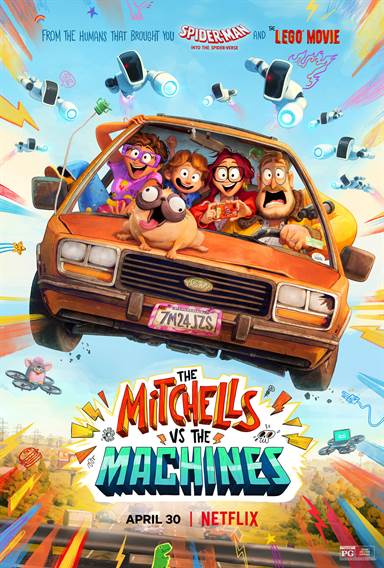 Imagine what would happen if one of the Terminator movies was reimagined into a computer-animated comedy.  It would be cheesy, mildly funny, filled with artificial intelligence and some violence disguised behind some cool music and animation.  Columbia Pictures decided to make this movie and this week it debuts in select theaters before streaming on Netflix beginning on April 30, 2021.  The aptly titled, The Mitchells vs. The Machines, is humorous, offers some great voice talent and animation, and, of course, includes the obligatory, heartwarming, moral lesson.  Unsurprising to almost anyone, (spoiler alert) it also has a happy ending.

Katie Mitchell (Abbi Jacobson; Neighbors 2: Sorority Rising) is an average teenage girl.  She never fits in at school, fights with her father often, and is strong-willed.  As she gets ready to leave for film school, having finally found "her people", she argues with her dad, Rick (Danny McBride; Alien: Covenant), more and more and is eager to leave her small town and her family behind.  Rick, however, comes up with a great (in his mind) idea that instead of dropping Katie at the airport, the whole family would take a road trip to drop her off at college – an idea she hates (as you could imagine).

Along the way they make several stops to "take in the sights", which usually end up somehow going wrong.  Since Katie's little brother Aaron (Mike Rianda; one of the film's 2 directors) loves dinosaurs, the family stops at a dinosaur museum which is much less than they imagined.  Suddenly a huge explosion knocks every off their feet and summons the arrival of humanoid robots that have been sent by their leader, Pal (Oscar Winner Olivia Coleman; The Favourite) to round up all the humans and take over the planet.  The Mitchells, with the help of two malfunctioning robots, try to stop Pal and her army before they destroy mankind.

McBride adds his quirky brand of humor to make the character of Rick the epitome of the stereotypical dad, armed with "dad jokes".  His good-hearted intentions are well intoned by McBride leaving every parent who sends a child off to college feeling a little lump in their throat.  Jacobson is terrific as the lead character, letting her enthusiasm shine through.  Rianda sounds too old to play Aaron, making the character disjointed.  Maya Rudolph (Bridesmaids) voices Katie's mom using her natural comedic timing to deliver the dialogue beautifully.   Colman, however, is a scene-stealer each and every time her character (the equivalent of a smartphone) delivers a line.

The computer animation is well done and the blend of sharp edges with the occasional fluidity of hand-drawn "doodles" gives the film some texture as it is being told from the artist/film school student, Katie's, perspective.  Writers/Directors Rianda and Jeff Rowe need to master the fine art of editing as the script, and subsequently, the movie, are both too long.  Also, having written episodes of Gravity Falls, The Mitchells vs. The Machines takes a more mature and violent turn, therefore making it not your typical children's animated movie.

Trying to stand out in the crowd from all the other animated films out there, while still attempting to imbue several life lessons, the movie seems scattered at times.  However, it does offer a stark look at how artificial intelligence seems to consume our lives, and the scenario of them one day taking over the world isn't as far-fetched as might seem.
The Mitchells vs. The Machines is definitely not for the toddler members of the household, but I could see 8-year-olds and up being interested in the film.  Honestly, I can also see some creative college students making up a drinking game for the movie.