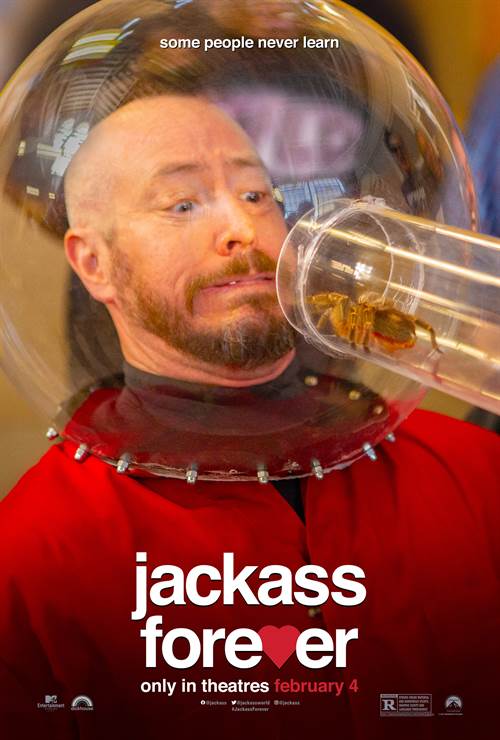 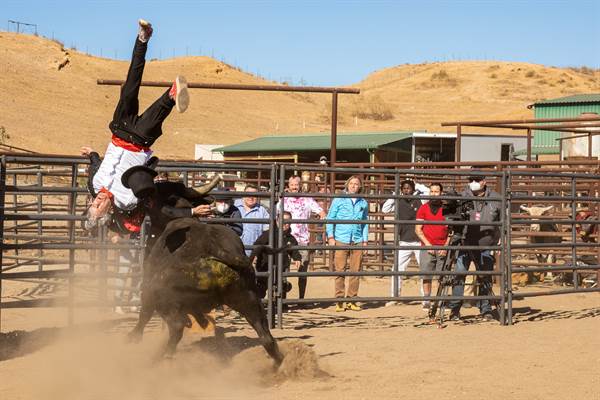 Celebrating the joy of being back together with your best friends and a perfectly executed shot to the dingdong, the original jackass crew return for another round of hilarious, wildly absurd, and often dangerous displays of comedy with a little help from some exciting new cast.  Johnny and the team push the envelope even further on February 4 in jackass forever.

Stream Jackass Forever in Digital HD/4K from the AppleTV store.


See an Advance Screening of JACKASS FOREVER in Florida  1/27/2022 1:15 PM EST
Do you like watching people play practical jokes on others or attempt unusual and sometimes dangerous stunts? Do you wish you were Johnny Knoxville? What if you could watch him and his friends do some dumb stuff like they used to do on their television show?  Well, you are in luck because JACKASS FOREVER is coming to theaters on February 4, 2022.Paramount Pictures and MTV Entertainment Studios, in...  More>> 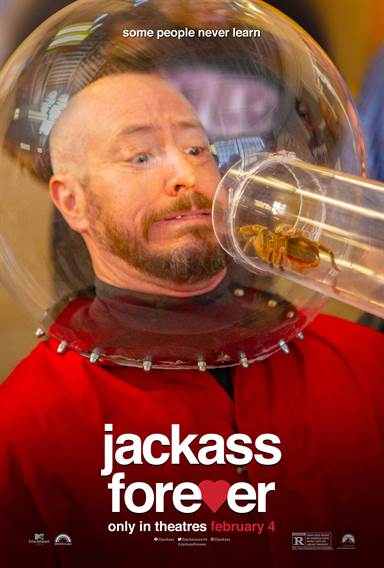 Fifty- years ago in Knoxville, Tennessee Phillip John Clapp was born. When he was 18, after graduating from high school, he moved to California to pursue a career in acting. Realizing he would need to create his own opportunities and falling back on his youth when he and his friends would try all kinds of stunts, he offered to test self-defense equipment on himself.  Television director/producer Jeff Tremaine (The Dirt) liked the idea and he, along with Spike Jonze (Being John Malkovich), discussed the idea for a stuntman-like television show, ultimately signing with MTV.   This week, the fourth movie, Jackass Forever, heads to theaters.

Interestingly, twelve years ago the Jackass team said at the time Jackass 3D would be the final movie, and yet, here we are over a decade later and we are now going to the theater for Jackass Forever.  There are some new bits intertwined with classic stunts that have been ramped up for the post-COVID lockdown (much of the film was shot during covid). There is also the ever-elusive “trying to light a fart on fire underwater” that has been attempted many times previously but never successfully executed.

Of course, there are surprise gags and dangerous stunts overseen by professionals and there are warnings posted at both the beginning and end of the film reminding the audience not to true these stunts at home.  Punctuating that sentiment is evidence of cast members blacking out, bleeding, and, on occasion, making a trip to the hospital, especially Steve-O and Johnny Knoxville, the latter having broken his wrist, one of his ribs, and suffered a concussion after trying to dance with a rodeo bull.

Returning to the cast, beside Knoxville and Steve-O, are Jason “Wee Man” Acuña, Chris Pontius, Ehren McGhehey, Dave England, and Preston Lacy.  However, realizing they are getting older and may not be as agile as they once were, the “old guard” welcomes some fresh talent to learn and carry on the legacy that is the Jackass Franchise.  These young, naïve individuals include Eric Manaka, Zach Holmes, Jasper Dolphin, Sean "Poopies" McInerney, and Rachel Wolfson.  These fresh faces take their punches (literally and figuratively) as a form of frat-house hazing, they watch and learn as they are mentored through the trials and tribulations of what amounts to several dangerous stunts.  It is obvious these guys are up for almost anything, and Wolfson, as the lone estrogen pumping member of the team, fits in well despite not partaking in the most dangerous stunts and not taking any clothing off (Easy young lads, I know you are disappointed but, alas, we only see her fully clothed).  Special guest appearances by Machine Gun Kelly, Tony Hawk and Tyler the Creator (among others) are well placed and enjoyable.

Of course, the same cannot be said for her male counterparts, as penises abound numerous times on screen.  The opening sequence, for example, is a penis painted like a large lizard stomping through a fake city wreaking havoc on people and buildings…and yes, it is as dumb as it sounds.  I will say I am appreciative of whoever invented the plexiglass boards that are used to flatten the male genitalia and then use them as sports equipment.  I leaned over to my colleague during that scene and whispered, “Welcome to the World of Mammograms”.

I have never been a big fan of slapstick comedy and I find most of what the Jackass cast does is stupid, but I will admit I laughed out loud maybe half a dozen times.  I was also grossed out by the toilet humor and disgusted by the stunts that intentionally meant to hurt the cast (i.e., paintball guns that left bruises all over their bodies including Steve-O’s nut sack).  However, the most disturbing bit was how traumatized Ehren looked after the bear stunt.

If you find this type of comedy hilarious you will no doubt enjoy almost all ninety minutes of the movie.  For many of us though, it is rather hit or miss with more misses than hits.