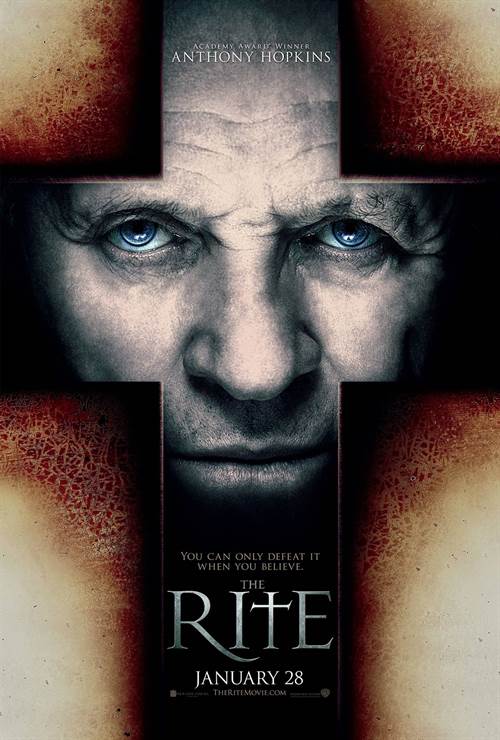 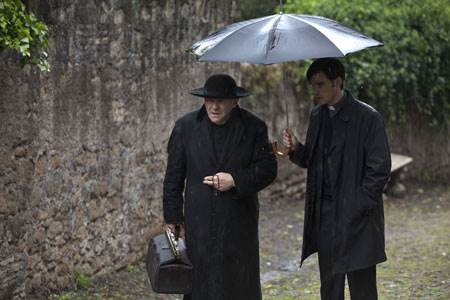 "The Rite" follows skeptical seminary student Michael Kovak, who reluctantly attends exorcism school at the Vatican. While he's in Rome, Michael meets an unorthodox priest, Father Lucas (Anthony Hopkins), who introduces him to the darker side of his faith, uncovering the devil's reach even to one of the holiest places on Earth.

Stream The Rite in Digital HD/4K from the AppleTV store.

The Rite images are © New Line Cinema. All Rights Reserved. 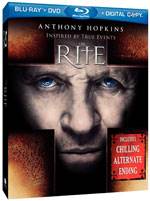 Every horror movie that comes along boasts that this film will be the scariest movie you have ever seen; sometimes even making comparisons to classic films like The Exorcist, American Werewolf in London, or The Ring. A lot of the time though these films turn out to be unable to follow through on their claims and you end up leaving the theater disappointed and unfortunately The Rite is just such a film.
The Rite stars Anthony Hopkins as Father Lucas Trevant, a priest vastly experienced in the field of exorcisms. Colin O'Donoghue stars as Michael Kovak a young American priest who is sent to Italy to study at a school that specializes in exorcisms. Kovak is strangely skeptic about the possibility of a person being taken over by the Devil. Considering his decision to become a priest and his faith in God one would think he could accept the existence of the Devil, but for the purposes of this movie he has to be skeptical or else there would be no plot.
As Kovak studies further and his teachers the depth of his unbelief in the possibility of demonic possession, one of his professors suggests he go and meet with a priest who can educate him better than most. Now we are introduced to Father Lucas Trevant who is the leading expert on exorcisms and has secluded himself from the world because of the horrors he has witnessed. When Kovak first meets Trevant he thinks the old man has just let his superstitious beliefs allow him to see a devil where none actually existed. Of course Trevant is much wiser in this area and is untroubled by the young priests brash unaccepting behavior.
There are a lot of old familiar clichés that come into play in this film such as "the devil doesn't need you to believe in him to exist" and "the only way to fight evil is to believe in its existence". And while these statements are true depending on your belief system, all they end up doing in this movie is taking away from what could be a fun and interesting take on the idea of exorcisms. As the film progresses we see that all the years spent fighting the devil in his many forms has allowed evil to seep into the life of Trevant and now that Kovak is beginning to believe in what Father Lucas has to say he is starting to see the influence of the devil everywhere he turns.
The film does raise a good question: Once we begin to believe in something, are we seeing its influence or being influenced by it? Unfortunately what could be an interesting plot point gets buried in typical horror movie fare. Trevant is slowing becoming more evil and it's up to Kovak to try and save him. The performances in the film don't ever really deliver even with someone like Hopkins at the helm. It's possible that he did the film because it sounded like a lot of fun or he just likes a good horror movie. But regardless what we end up with is a film that relies on simple shock value to keep an audience glued to the screen.
Now released on Blu-ray those who enjoyed the film will have a chance to get a further look into the film. The DVD comes equipped with a few extras like an alternate ending, a min doc about Father Gary Thomas the man who inspired the film, a look within the exorcism academy and interviews with those who had experiences with exorcisms. Finally there are a few additional scenes that were cut from the final print of the film. The film bears the usual stamp of Blu-ray, looking and sounding much clearer than ordinary DVD's. All in all this Blu-ray release is a fairly decent DVD for those who love to get an in depth look at the making of movies.
The Rite is a fun movie and most audiences will find it fun to watch but if you're someone who truly wants to be scared then it would be best if you looked elsewhere.