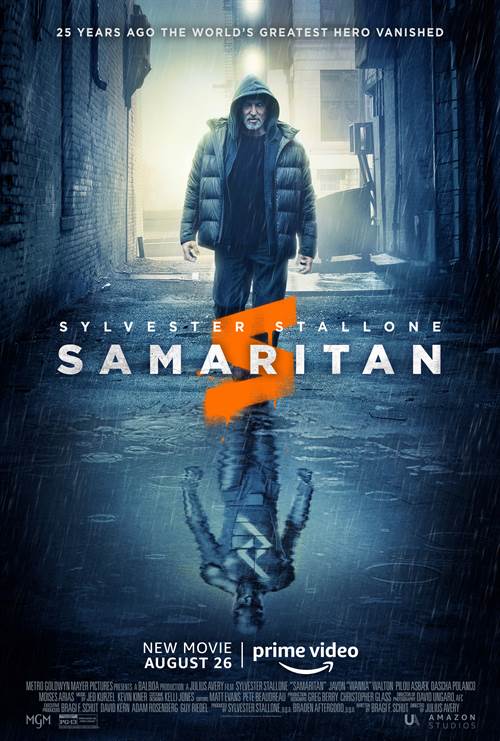 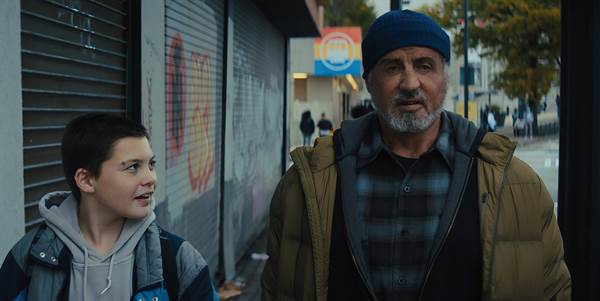 Thirteen-year-old Sam Cleary (Javon “Wanna” Walton) suspects that his mysterious and reclusive neighbor Mr. Smith (Sylvester Stallone) is actually a legend hiding in plain sight. Twenty years ago, Granite City’s super-powered vigilante, Samaritan, was reported dead after a fiery warehouse battle with his rival, Nemesis. Most believe Samaritan perished in the fire, but some in the city, like Sam, have hope that he is still alive. With crime on the rise and the city on the brink of chaos, Sam makes it his mission to coax his neighbor out of hiding to save the city from ruin.

Listen to the Samaritan soundtrack on Apple Music. 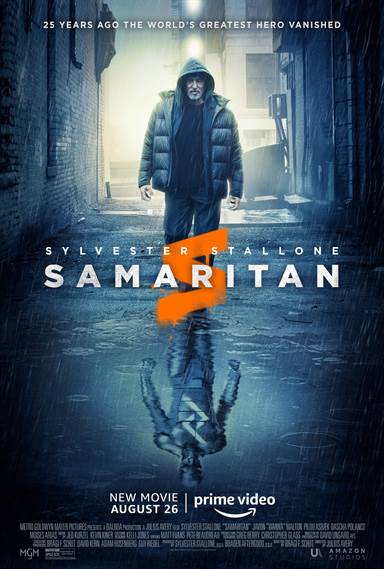 Do superheroes get to retire? After years and years of doing their “jobs” do they get to live out their days at some nursing home nestled in the countryside with a quaint little name like “Shady Brook” or “Quiet Waters” retirement home?  What if they just wanted to quit? Give up? Stop saving people? Stop catching the bad guys? Could they do that? Could they retire in good conscience knowing there is still evil in the world?  Even if they could, how would they be able to simply disappear? Sylvester Stallone’s (Rocky) newest project, Samaritan, offers a glimpse of what happens when a superhero, presumed to be dead, lives across the street, in plain sight but is barely noticed.

The legend tells of two brothers who grew up possessing incredible strength, unnatural speed, and a knack for finding and creating trouble.  As adults, one of the brothers, called Samaritan, became a defender of good while his brother, called Nemesis, encompassed the evil side of life.  As the story goes, Nemesis forged a hammer (*cough* Thor *cough*) that could kill his brother and lured Samaritan to Granite City’s power plant to kill him.

However, when the plant blew up and a fire engulfed the building, it was presumed both brothers had perished.  But what if Samaritan survived and was living a quiet life in Granite City?  For Sam Cleary (Javon “wanna” Walton, Euphoria), that was not only his wish but his “quest”.  He studied people and followed clues in hopes of finding the reclusive Superhero.  Of course, none of his “finds” panned out until he turned his sights on his neighbor Joe (Stallone). Despite Joe’s protests, the more Sam spent time with him, the more Sam was convinced Joe was the long-lost superhero, Samaritan.

Stallone is getting old and starting to look his age.  However, he can still handle action sequences as witnessed in Samaritan.  He plays a surly, old, cranky superhero who lives as a hermit and wants nothing more than to be left alone.  Walton, despite his young age, does remarkably well sharing the screen with the veteran actor.  The two have a rapport that reminds one of a young boy and his grandfather.  Joining them are Dascha Polanco (Orange is the New Black) as Sam’s mother, and Pilou Asbæk (Game of Thrones) as a “gang” leader who resurrects Nemesis in hopes of creating anarchy and luring Samaritan out of hiding.

Director Julius Avery (Overlord)  is hit or miss on this project and never seems to get his racehorse out of the gate.  The pacing is painfully slow, the shots and angles are not unique or groundbreaking and the stunts and fight choreography are terrible as the viewer can clearly see punches that don’t connect.  The script fares slightly better with a few humorous/sarcastic lines expertly delivered by Stallone but the plot, which had a lot of potential, falls flat.  So many things are not explained and a lack of backstory leaves the viewer with more questions than answers. The only interesting thing about the story is the pot twist in the third act that takes the audience by surprise.

Let’s face it, the world doesn’t need another superhero movie and it doesn’t need this one.  With an incomplete story, poorly shot action sequences, and no hero to root for, Samaritan doesn’t bring anything new or interesting to the table.  Even a superstar like Stallone can’t save this film from being its own worst enemy and nothing is enticing in the first two acts to keep audiences engaged enough to stick around for the slightly more interesting end.