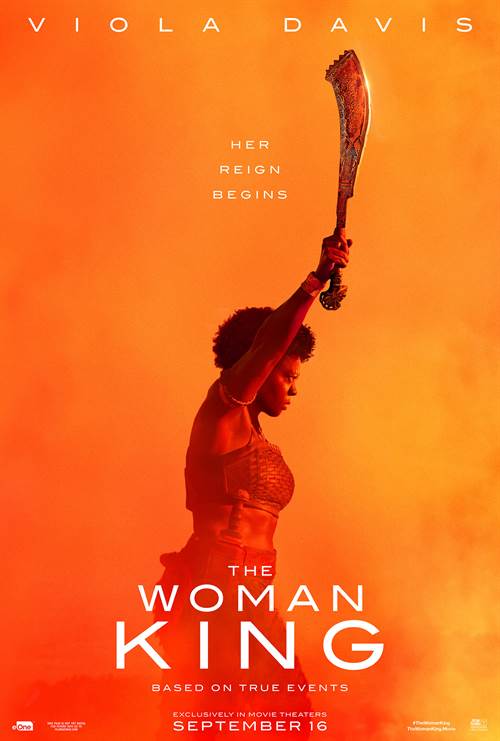 The Woman King is the remarkable story of the Agojie, the all-female unit of warriors who protected the African Kingdom of Dahomey in the 1800s with skills and a fierceness, unlike anything the world has ever seen. Inspired by true events, The Woman King follows the emotionally epic journey of General Nanisca (Oscar®-winner Viola Davis) as she trains the next generation of recruits and readies them for battle against an enemy determined to destroy their way of life. Some things are worth fighting for…

Stream The Woman King in Digital HD/4K from the AppleTV store.

Listen to the The Woman King soundtrack on Apple Music.

The Woman King images are © TriStar Pictures. All Rights Reserved.


See an Advance Screening of THE WOMAN KING in MIAMI  9/1/2022 2:22 PM EST
Some people may be under the impression that the "women's power" movement is a recent development but the people of the tiny, African nation of Benin know better.  From the 1600s to the 1900s the country had a tradition of fierce warriors…female warriors…that protected the Country and on September 16th, 2022 people will learn their story.In anticipation of the theatrical release Sony Pictures, in ...  More>> 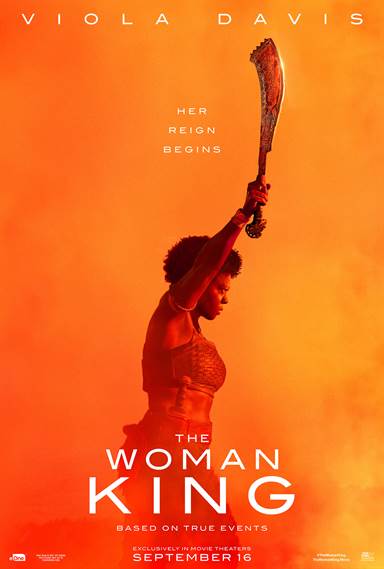 Where the African Country of Benin now sits, there was originally another country called Dahomey.  Dahomey existed from the 1600s to 1904 and not only had male soldiers but also highly trained female soldiers known as the Agojie.  Originally formed as elephant hunters, these women honed their strength and fighting skills to become defenders of the king and the Country.  Director Gina Prince-Bythewood (The Old Guard) brings their story to the big screen in The Woman King, based on a screenplay written by Dana Stevens (Safe Haven) and distributed by Sony Pictures.

Nanisca (Viola Davis; Fences) has been an Agojie warrior for much of her life and she has numerous scars to prove it.  She is cunning, merciless, and highly skilled.  She is a general who oversees the female warriors under her command.  She is also highly regarded in King Ghezo’s (John Bodega; Star Wars: Episode VII - The Force Awakens) Palace and is one of his most trusted advisors.  As tensions mount between the Dahomey Kingdom and the Oyo, Nanisca is one of the few who feel they should no longer bend to the Oyo will.  At the same time, the Agojie begin to train a new group of young women.  Among them is Nawi (Thuso Mbedu; The Underground Railroad) who is entangled with Nanisca’s darkest secret.

As an actress, Davis is a force to be reckoned with.  She can play hard-as-nails Amanda Waller controlling dangerous criminals in Suicide Squad or she can be a perfectionist as a Jazz Singer in Ma Rainey’s Black Bottom.  However, as Nanisca she transcends to another level of fierceness. Mbedu has a difficult job acting next to Davis but she manages to hold her own.  The other cast members, including Lashana Lynch (No Time to Die) as Izogie and Shiela Atim (Doctor Strange in the Multiverse of Madness) as  Amenza, enhance Davis’ and Mbedu’s performances.  The ensemble cast is well chosen to elevate Stevens’ script.

Prince-Bythewood offers audiences some interesting visuals and manages to make the fight scenes bloody and savage while not overselling the violence.  She counterbalances the fighting with character studies of Nanisca, Nawi, Amenza, etc.  She showcases the women behind the soldiers offering a complete picture of who these women are and how they bury their emotions when necessary.

However, Stevens’ screenplay is the driving force behind the character studies.  Her script depicts these women not simply as fighting machines but as humans who have chosen a different path in life.  They are respected and revered by the people they protect as well as by their King. They were trailblazers at a time and place in history where women were wives and mothers and second-class citizens.  These women and the kings and queens they served were ahead of their time.

If I have two criticisms about The Woman King they are that the movie is just a tad too long and that, while Davis rises to the physical challenges of portraying a general, I couldn’t escape the feeling that she seemed a little old for the role. The feeling I got was that she was supposed to have trained with Amenza but she is clearly older than her trusted friend.

I would be surprised if The Woman King didn’t receive at least a few Oscar nominations, especially for its score, costumes, and acting.  Filmed in South Africa, the atmosphere gives the movie an air of credibility that it would not have had if it had been filmed on a soundstage.

While the movie has action, revenge, and a romantic subplot, its main purpose is to serve as a history lesson on female warriors in the early 1800s, especially young girls of African American descent.