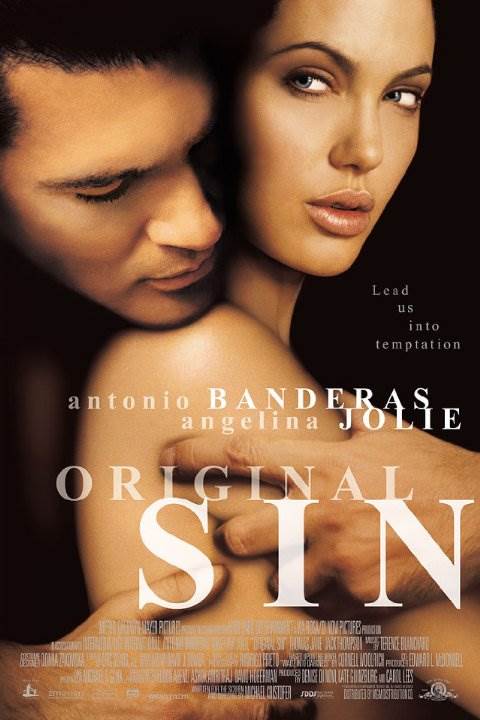 1880s Cuban coffee-plantation owner Luis (Banderas) sends to America for a mail-order bride, seeking only someone loyal and of child-bearing years. To discourage gold diggers, he describes himself as a clerk. When his bride-to-be Julia (Jolie) shows up, Luis discovers that she's much more attractive than her picture. She claims that she wanted to be desired for something other than her beauty. With a start like that, what could go wrong? Well, betrayal, murder and theft for starters. An American private detective arrives on the scene, hired by Julia's family to report on her well-being. This fuels doubts in Luis, but a little too late. Soon he's cleaned out, shamed and on the trail of his former "wife." Banderas and Jolie torch the scenes as the couple in lust, but the ham-handed dialogue and direction derail this period potboiler. Loosely based on the Cornell Woolrich novel "Waltz Into Darkness," which was also the source for Truffaut's "Mississippi Mermaid."

Stream Original Sin in Digital HD/4K from the AppleTV store. 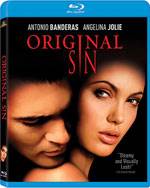 Original Sin stars Antonio Banderas and Angelina Jolie as two people who are arranged to be married but have never actually met. Having only learned about one another through a series of letters the two have written to each other they finally meet on the day of their wedding. When Luis (Banderas) finally meets Julia (Jolie) he is surprised to see that the beautiful woman standing before him looks nothing like the photos she has sent him. She says that she deliberately sent him the wrong photos so that he would not judge her for her looks alone.
Naturally having just met Julia is somewhat nervous around Luis and he informs her that if she requires time to become accustomed to him before they consummate the marriage then she shall have all the time she needs. She is surprised at such an offer and certainly takes him up on it. As time passes and they learn more about each other a deep passion grows between them which eventually develops into love. Before long Luis entrusts the majority of his bank accounts and business affairs to Julia. But not all is as it seems, Julia's sister writes often speaking of a disagreement between them and hoping for Julia's forgiveness. Eventually a man shows up named Walter Downs (Thomas Jane) claiming to be a private investigator sent by the sister.
At the same time Luis also discovers that Julia has run off with all of his money. Downs offers his services in tracking down Julia so he can retrieve his money. He eventually finds her and it is then that we discover that Julia is actually Bonny Castle, an orphan who grew up to become a very successful con artist. Even after learning the truth about her, Luis can't bring himself to truly hate her. His love for her is too deep and they reconcile. They return together to Luis's home and things seem ideal until Downs's returns and during an altercation Luis shoots Downs. Julia offers to help him hide the body and then things take a darker turn. Downs is actually Julia's accomplice Billy and faked his death. They have been working together for years and now they have set their sights on Luis.
The only problem is that Julia is beginning to develop true feelings for Luis but Billy will not allow her to leave their old life. As the consequences of his actions force Luis and Julia to go on the run he must now enter a life of deception to survive. It is only a matter of time before Julia must face up to the life she has led and decide whether she wishes to continue on this path or find a new life with Luis.
The film contains some beautifully shot landscapes and sets'; now being on Blu-ray it only enhances these shots throughout the film. The performances from the actors leaves a bit to be desired, Jolie and Banderas certainly have acting chops but the graphic nature of certain scenes tend to take away from the depth of the plot which is actually quite intriguing. The Blu-ray itself doesn't boast that many extras containing only a commentary from the director and a music video from Gloria Estefan.
Original Sin is an interesting film with an interesting plot but it falls prey to the pitfalls of Hollywood which sometimes relies too much on sensuality to keep an audience engaged.