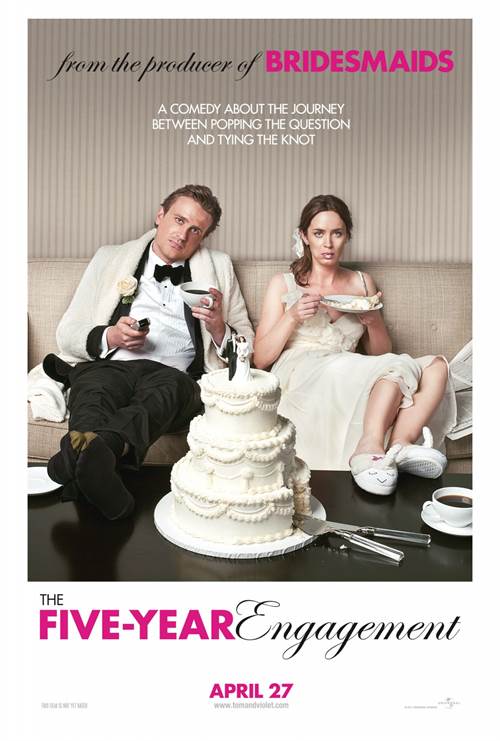 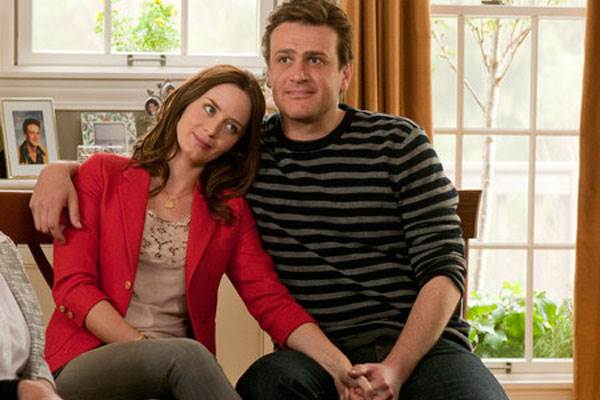 The director and writer/star of Forgetting Sarah Marshall reteam for the irreverent comedy The Five-Year Engagement. Beginning where most romantic comedies end, the new film from director Nicholas Stoller, producer Judd Apatow (Knocked Up, The 40-Year-Old Virgin) and Rodney Rothman (Get Him to the Greek) looks at what happens when an engaged couple, Jason Segel and Emily Blunt, keeps getting tripped up on the long walk down the aisle.

Stream The Five-Year Engagement in Digital HD/4K from the AppleTV store.

The Five-Year Engagement images are © Universal Pictures. All Rights Reserved. 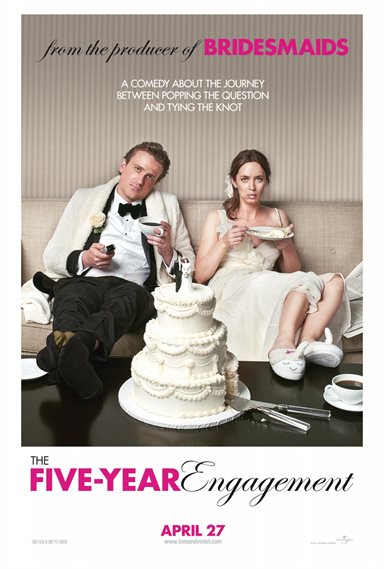 Much like most of Jason Segel's films the comedy runs high in The Five-Year Engagement with strong performances, good direction and a decent script.  It's another romance film, but this one does have an edge that keeps this ditty reasonably fresh. Take a date or a gang the laughter gets contagious so sit back and enjoy a break from social networking.

The film centers on Tom (Jason Segel) and Violet (Emily Blunt) an ordinary couple now in their first year of a budding relationship.  Taking the next big step, Tom asks Violet to marry him and so begins an engagement that takes a lot of twists and turns.  On again, then off again the two try to keep on track, but with Violet's sister Suzie (Alison Brie) getting pregnant with Tom's best friend Alex (Chris Pratt) and Violet taking a job in Michigan far from Tom's San Francisco comfort zone the relationship finds itself heading for disaster.

Although the film does have excellent comedy chemistry between all the main characters, the content has been used in other films.  It's the way the situations are handled, however that do allow this relationship film to entertain.  Segel's Tom and Blunt's Violet have an opposites attract feel about them, more so than in any other film I've seen except for When Harry Met Sally.  The only difference between the two films is that the script for Five-Year deals more with a push for marriage rather than an on again off again Harry and Sally relationship that negates the institution.

Direction by Stoller (Get Him to the Greek, Forgetting Sarah Marshall) spins his magic with The Five-Year Engagement keeping the laughter mixed with life lesions on an even stage.  His ability to keep his actors delivering punch lines, some in rat-a-tat outpouring that kept me laughing till it hurt, for over two hours certainly makes him a bright star in the business.  Of course it helps to be friends with producers Judd Apatow and Rodney Rothman that can give him a chance to show his stuff.

There's a hilarious scene worthy of an Oscar (if they ever give one for a supporting actress from a comedy) involving Tom's short lived relationship with Audrey (Dakota Johnson).  When Tom decides to break-up with the sexually voracious Audrey she gives him all the reasons why he's making a big mistake.  The delivery lasts about a minute, but she gets a lot of zingers into that short period of time.  Way to go Dakota you made me a believer that comedy is still King (or in this case Queen).

The Five-Year Engagement has been rated R by the MPAA for sexual content, and language throughout.  You don't have to be a woman to enjoy this romantic comedy, just be yourself and cast off your humdrum day for the evening.