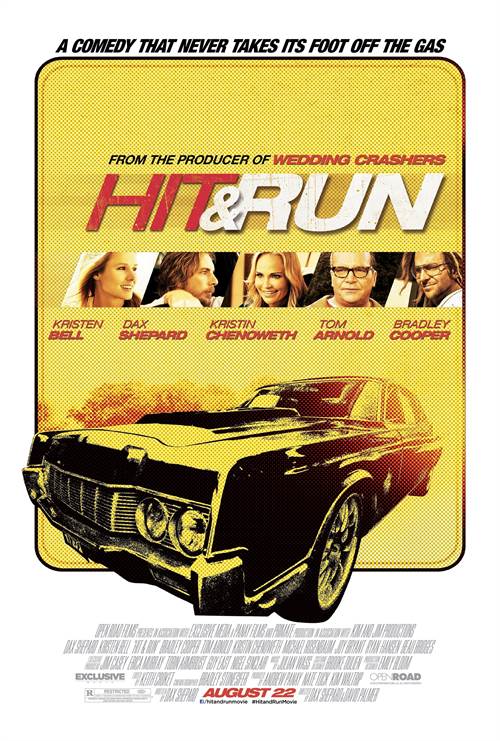 A comedy about a young couple (Kristen Bell and Dax Shepard) that risks it all when they leave their small town life and embark on a road trip that may lead them towards the opportunity of a lifetime. Their fast-paced road trip grows awkwardly complicated and hilarious when they are chased by a friend from the past (Bradley Cooper), a federal marshal (Tom Arnold) and a band of misfits

Stream Hit and Run in Digital HD/4K from the AppleTV store. 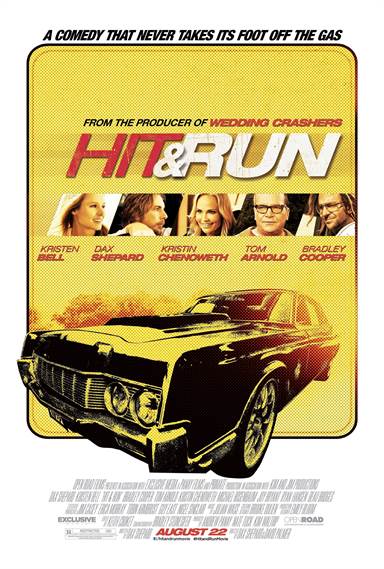 The motor sounds are real. Writer/director/star Dax Shepard (Parenthood, When in Rome) provided many of the vehicles from his personal collection, and does all his own stunts. So he reported, in his appearance following the screening at which I saw Hit and Run, at Comic-Con 2012. Car chase movies attract a sub-audience that worries over these things. Make no mistake here: Hit and Run is a car chase movie. It isn't a subversion or commentary on the format; it is just a car chase movie. People get in cars and chase each other on the flimsiest excuses. As an example of the genre, it cuts right down the middle. Going into the screening, I worried over whether Parenthood was making Shepard look too good. When the writers are good, and the other actors are good, some of that shine can rub off. Who could say a bad word about anyone in Six Feet Under? Now, I have to worry over whether Shepard is making Parenthood look good. Because damn, he can write a dialogue. The film knows it's strong here too: every major character and relationship, particularly that with girlfriend Annie (Kristen Bell, Veronica Mars, When in Rome) is established over a nice cool glass of tangential discourse, giving you a sense of immediate depth not otherwise belied by the vagaries of the plot, such as they are. Weak spots may be Tom Arnold (True Lies) and Kristin Chenoweth (The West Wing, Pushing Daisies), though I'm not convinced they are to blame here. Chenoweth had only three scenes, despite poster art placement. Arnold is forced to carry most of the physical comedy of the film, though he holds his own in every other way. Perhaps I'm being too fair, though. Perhaps the shine rubs off on him. The film may, or may not, be deeply faulted for its simplistic, if sometimes well-motivated, plot. I'm not going to fault it, though, as I have a weak spot for stories that abandon pretense of plot in favor of letting writers write and actors act. We achieve perfection not when there is nothing left to add, but when there is nothing left to take away. Perhaps what's really needed to strive for that goal is a limited budget, maybe excusing a few fancy cars. 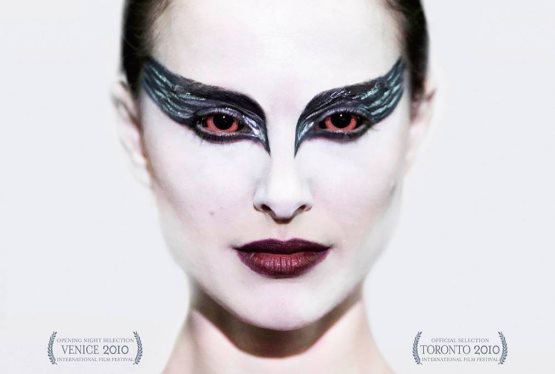