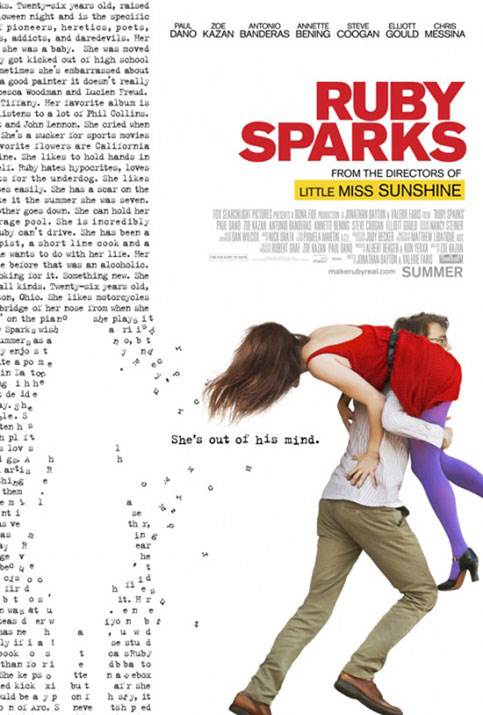 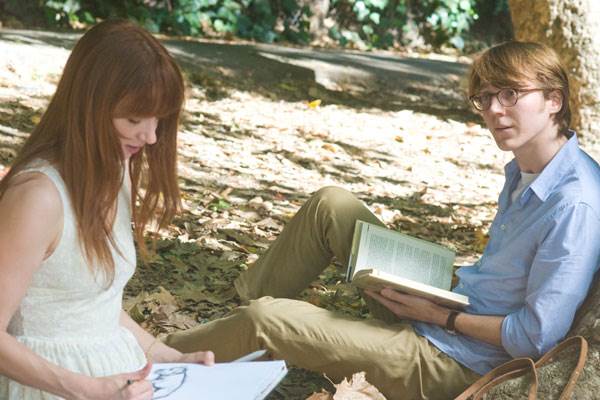 Young author Calvin Weir-Fields (Paul Dano), once a literary darling, is having trouble composing his next novel. Following a therapist's advice, Calvin pulls out an old manual typewriter and creates a vivacious, flame-haired woman he dubs Ruby Sparks (Zoe Kazan). Overnight, Ruby leaps from the page into Calvin's home as a real flesh-and-blood woman. And, what's more, she's unaware that she's actually a fictional character and that her actions and feelings are dictated by whatever Calvin writes.

Stream Ruby Sparks in Digital HD/4K from the AppleTV store. 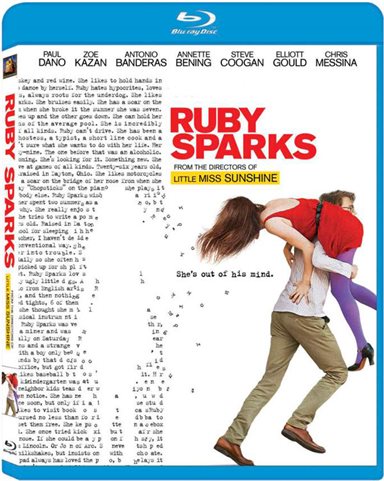 Here's a romantic comedy called Ruby Sparks that although may have a familiar storyline, delivers good entertainment for young adults.  Well acted with a fine cast, the movie has come to Blu-ray for home viewing.  So for you young lovers, cook a delightful meal, break out some sensual aromatic candles and cozy up to this fun filled misadventure with a lot of heart.

The story centers on Calvin (Paul Dano), a young successful author who needs to write a follow-up novel that will keep him in front of the public. Unfortunately he has found himself with writer's block preventing him from developing his next subject.  Thinking he has hit rock bottom Calvin tries to take his mind off his writing problem by jump starting his failed love life.  The dating scene however only digs him deeper into a state of depression.

At a local park he meets a girl and starts to write about her.  He names the character of his new book Ruby Sparks (Zoe Kazan).  Getting really close and enamored by his description of Ruby, he starts to fall in love with her.  After writing several chapters he starts to feel good about himself and his future.  He arrives home one evening to find the girl he has described in his book on his living room couch. Totally astounded, Calvin goes to see his therapist (Elliot Gould) but it does him no good. When other people start seeing Ruby and he realizes his mind's not playing tricks, things start to get out of hand for the young author.

Dano and Kazan have great chemistry together on screen and you can see the budding relationship of their characters develop into something larger than life in spite of all the problems mounting before them.  After all, knowing that Ruby came from his own mind and driven by what he writes, Calvin's completely in control of the young woman's personality. Calvin brings Ruby to meet his openly free-spirited mother Gertrude (Annette Bening) and her handsome boyfriend Mort (Antonio Banderas).  He accidentally becomes incapacitated and Mort gives Ruby some romantic attention causing jealousy.   When Calvin decides to change things by rewriting Ruby their relationship takes a downward spiral.

The film gets really involving in a good way, especially since writer Zoe Kazan keeps her story moving along at a fast clip with twisty moments involving unique situations.  Actually with a cast that includes Paul Dano, Annette Bening, Antonio Bandaras and Zoe herself in the lead, it's no surprise that the funny romance has all the trappings of a winner.   Zoe keeps the script on track and doesn't stray off course making sure the focus keeps on the young couple while adding all the elements that affect their relationship.

Directors Jonathan Dayton, Valerie Faris, who gave moviegoers the quirky comedy Little Miss Sunshine, spin their magic with Ruby Sparks.  Disguising the twists for timely surprises, the two veteran directors make Kazan's film a cunning winner.  Having to build a better mousetrap beyond films like Weird Science, Splash and The Woman in Red isn't an easy job, but the duo directors certainly best the forerunners of fantasy romance with Ruby Sparks.

The bonus features are actually very good with some interesting interviews with directors and stars:  (Do not watch any of the bonuses before you see the film as there are a lot of spoilers.)
"Real-Live Couples: Co-stars and Directors": goes into how the production staff and actors worked together in bringing Dano and Kazan's real life chemistry to the screen. It goes into the choice of apartments in LA necessary to make the film work. It's probably the best of the bonuses because of the personal real life aspect involved.
"Be Careful What You Wish For"- a featurette where Kazan, Dano and directors talk about the film and the characters as it goes through several scenes. It explains why the characters react in their relationships during the film.
"Behind the Story"- How the story was developed featuring writer Kazan
"Getting to Know the Cast" and "Los Angeles: The Other Character" are title specific.

The Video Quality featuring Widescreen 1.85:1 makes for a very good presentation in the Blu-ray format. The movie shows extremely well on my HD Television. I didn't see any grain, distortion or glitches of any kind.

The Sound Quality provided on the Blu-ray disc DTS Master Audio 5.1 does an excellent job with no distortion played through my HD Television speaker system.  If you have a surround system you may not need to turn it on as there's hardly a scene where you would need it.

FINAL ANALYSIS: A very good comedy romance story for the young and young at heart. (B)