Home / Movie Database / We Own The Night 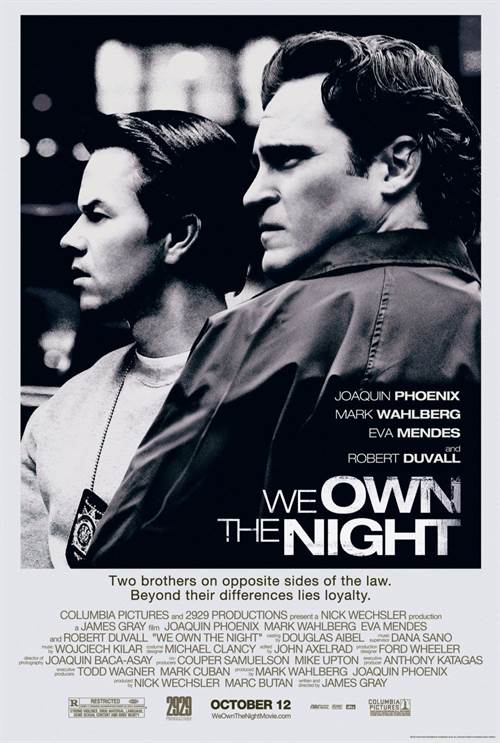 We Own The Night Synopsis 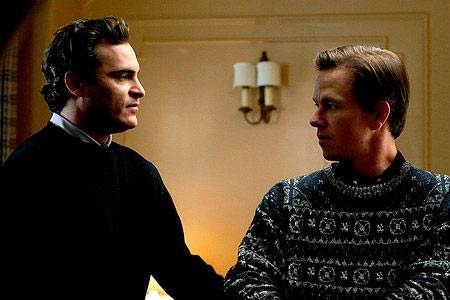 In 1988, New York's police wage an all-out war on drugs, and guilty and innocent alike become casualties. Bobby Green (Joaquin Phoenix), manager of a nightclub that is often frequented by gangsters, tries to remain neutral but hides a potentially fatal secret: His brother (Mark Wahlberg) and father (Robert Duvall) are both cops. Caught in the middle, Bobby and his girlfriend, Amanda (Eva Mendes), are forced to choose sides - between the familial ties he has rejected and a future he cannot avoid.

Purchase DVD/Blu-ray/4K UHD physical copy of We Own The Night today at Amazon.com

Stream We Own The Night in Digital HD/4K from the AppleTV store.

We Own The Night images are © Columbia Pictures. All Rights Reserved.

We Own The Night Theatrical Review 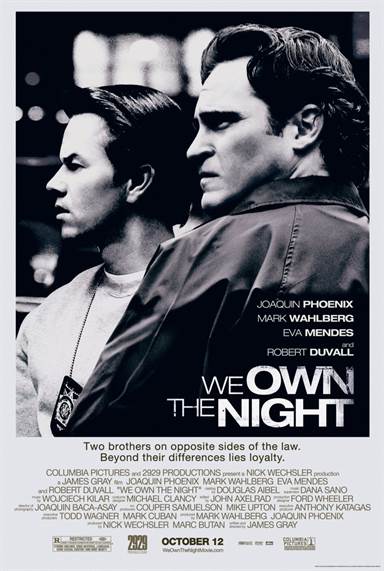 There was precious little owning of the night, to be honest. In fact, a large part of the movie was not shot at night. If anything got owned for sure it was my $8.50.

We Own The Night stars Joaquin Phoenix who appears on screen with Mark Wahlberg and Robert Duvall. Which might make you think it would be good. Hey, it made me think it would be good. Also in the picture is Oleg Taktarov who I first saw choking out some BJJ fighter in the UFC. If Oleg threw down with Phoenix that would be worth watching. It'd also be a helluva lot shorter than 117 minutes.

Oh, and because they "don't get along" no one knows they are brothers. It's a secret.

If cinema has taught us anything it is that nice old Russian guys with adorable daughters are hardcore Russian criminals. Sure enough, although nice-old-guy father-figure appears to be clean, his cousin is bad-to-the-bone. A serious drug dealer. And he puts a bullet in Wahlberg as the police get too close.

This gets drug-brother really mad and they team up to fight crime.

Except it isn't nearly that kinetic. There is a meandering slow plot that unfolds like someone with arthritis trying to take apart an origami blowfish (I bet that's a metaphor you haven't heard before).

And then, reader, there is a lot of bs...There is "let's make the guy a cop for no good reason" (yes, it is true: they make Wahlberg a cop without sending him through the academy--he can 'go later.') There is spouting the family secrets in front of the bad-guy for no good reason bullshit. There is convenient escape-from-prison bullshit. There is rush-into-the burning woods for no reason.

Yes: there is bullshit. In a cop movie, it hurts. The bullshit hurts.

But that isn't my real complaint with the movie. Ocean's 13 was founded on a whole chunnel bore of bullshit and I still really liked that movie--no, where We Own The Night falls down is construction and focus. Writer / Director James Gray wants to have male bonding in the movie between the brothers but it is so ham-handed that he'd be better off using real bonding ... like with crazy glue. The dialog veers from cliché to inexplicable from scene to scene.

The gorgeous Eva Mendes (whom we first see masturbating on a couch) is so under-utilized it's a mystery as to why she gets second billing. She's the girlfriend of Whalberg. She's nice and nice to look at--but after she goes into hiding with Marky Mark and gets systematically ignored by him despite, in my opinion, being a loyal trooper, she eventually leaves the story--and never comes back. In the end, I think, Mark hallucinates her before uttering "I love you" to his brother. I can't be sure. I'm certainly not asked to think about it too hard. There's a whole scene where she leaves police protection ... to go see her mom ... and nothing comes of it.

In fact, there is a good deal of the movie that "nothing comes of." The structure, first, struck me as some kind of realistic anti-narrative where things are built up but then don't pay off in a Sopranos style anti-climax. But, no--it's just poorly done climax: there's still a big raid at the end and still closure and everything. There's still the betrayal you're waiting for all movie ... it just all falls kinda flat.

The slogan "We Own The Night" is apparently from an anti-drug task-force around NYC. I'm guessing this was one of those titles they just slapped on after casting about for anything that wasn't taken by some other, better movie. That's what the whole think kind of felt like, in fact.