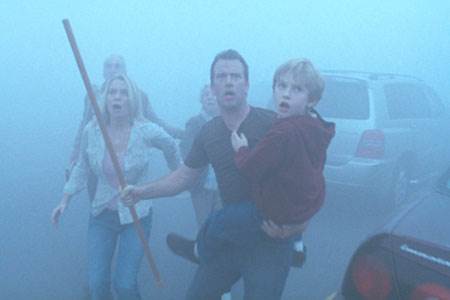 Three-time Oscar-nominee Frank Darabont ("The Green Mile," "The Shawshank Redemption") reunites with horror-master Stephen King to write and direct this chilling adaptation of the author's original short story. Following a violent thunderstorm, artist David Drayton and a small town community come under vicious attack from creatures prowling in a thick and unnatural mist. Local rumors point to an experiment called the 'The Arrowhead Project' conducted at a nearby top-secret military base, but questions as to the origins of the deadly vapor are secondary to the group's overall chances for survival. Retreating to a local supermarket, Drayton and the survivors must face-off against each other before taking a united stand against an enemy they cannot even see!

Download The Mist in Digital HD/4K from the iTunes store.

The Mist images are © Dimension FIlms. All Rights Reserved. 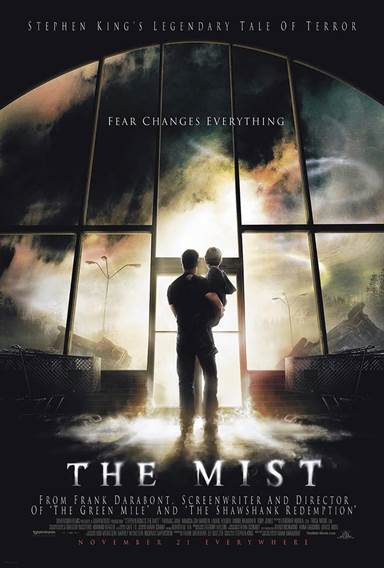 Until the last 20 minutes: at which point it completely sucks.

The Mist is a tale of humanity's last stand in a supermarket: a strange fog rolls across a small town in Maine and, within it, are horrible Lovecraftian monsters. Tentacles snake out of the mist to grab and devour a bag-boy who ventures outside. Reptilian, insectile, and stranger things lurk just outside of vision ... until you are too close--and then you are lunch (or worse). The lucky people who happen to be inside the grocery store are protected from this ultra-predatory environment by a thin wall of glass.

What will happen when one of those big things out there decides to try to break it?

The main character is David Drayton, an artist (we see him doing a painting for a movie version of The Dark Tower), and family man with a loving wife and son. The son comes with him to the grocery store. The wife stays home ... in a house where a tree has come through the window ... so we know what will become of her.

Inside the store, as the desperation of their situation increases, the psychological element of the movie begins. There are factions that emerge--those who don't believe in the supernatural. Those who believe it is the wrath of an angry god (led by Marcia Gay Harden doing a wicked-witch act as the 'unstable' Mrs. Carmody). Then there's the people who see what's going on and decide to face it as courageously and rationally as they know now (the main characters).

This involves rallying a defense when the nature of the dilemma is clear. It involves a brave, desperate raid on the next-door pharmacy (who left their doors open so the mist came flooding in) to get medication for a wounded comrade. It finally involves trying to make some very tough decisions about staying holed up in what might be mankind's Alamo--or trying to make a break for it in the mist-shrouded land-rover that David came in (it seats 8, all the people who might want to leave).

The real story is about the psychological pressure-cooker and how people respond to pressure according to their natures and weaknesses. It may fall short of really insightful--but for a horror movie, it delivers more than adequately.

And then it falls apart.

The decisions in the end lead the characters to a point where they have a truly terrible choice to make (the nature of which I cannot go into here). Where the movie follows King's story, it does not misstep: it's source material is some of the strongest stuff from one of the best writers of our generation. It is in bringing it home that writer-director Frank Darabont (who also did Shawshank) drops the ball entirely.

In the film the, main characters--the heroes--make brave decisions whose courage and purpose is entirely undercut in the final scene of the film. It makes sacrifice pointless (or worse, vulgar). Its message is that heroism is a losing game--not because of the nature of taking risks--but because it appears the filmmakers themselves, lacked the guts to end the story on a truly apocalyptic note. Instead, they have simply sacrificed all the characters we actually cared about.

In doing so, the film proves its own (muddled) message wrong: either have the guts to end a few minutes before the final ending or leave it as the book did (also daring) with the car driving into the mist towards a razor-thin sliver of hope. If the ending is true to Darabont's intended vision then it is simply weak. But I doubt that: I smell audience-response testing. I think it was cowardly.

Asides
I wish I could've been more impressed with it. 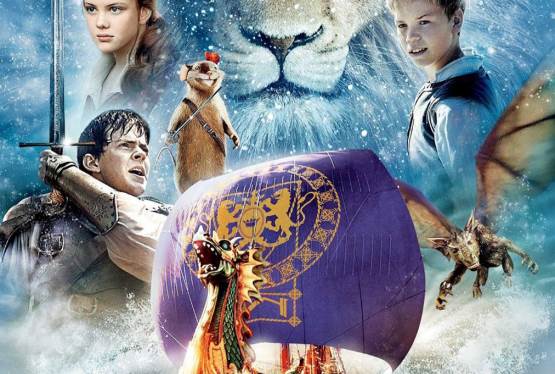