Home / Movie Database / On The Road 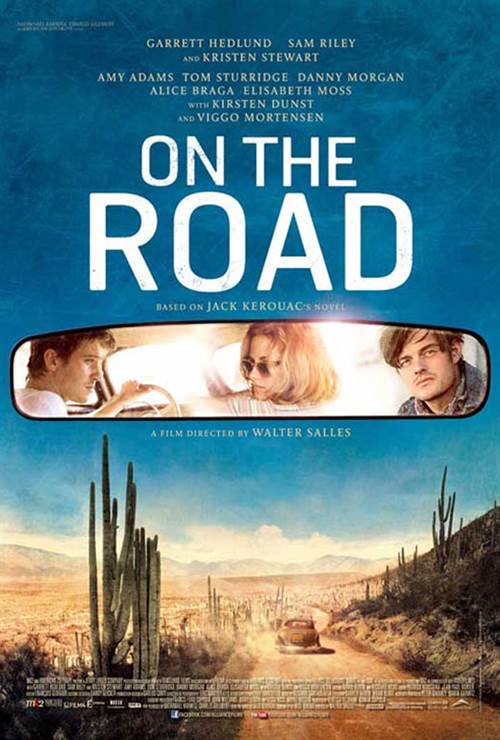 Sal Paradise (Sam Riley), a young writer whose life is shaken and ultimately redefined by the arrival of Dean Moriarty (Garrett Hedlund), a free-spirited, fearless, fast talking Westerner and his girl, Marylou (Kristen Stewart). Traveling cross-country, Sal and Dean venture out on a personal quest for freedom from the conformity and conservatism engulfing them in search of the unknown, themselves, and the pursuit of "it" -- the pure essence of experience.

Purchase DVD/Blu-ray/4K UHD physical copy of On The Road today at Amazon.com

Download On The Road in Digital HD/4K from the iTunes store.

On The Road images are © IFC Films. All Rights Reserved.

On The Road Theatrical Review 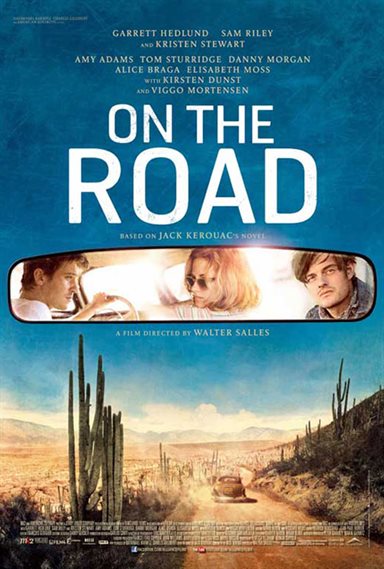 A road movie with a lot of sexual energy opens this weekend in South Florida.  The film is called On the Road and its brilliant cast makes it a winner.  Taken from a novel by Jack Kerouac, the film gives a view of 40's America and the challenges faced by a group of free-spirited friends.

It's 1947 New York City where we find Sal Paradise (Sam Riley) parking cars for a living while he has aspirations of writing his first novel.  He meets up with Dean Moriarty (Garrett Hedlund) who has just been released from a detention center and the two hit it off with Sal taking notes on their relationship.  Dean's current girlfriend Mary Lou (Kristen Stewart) has a deep seated desire for sex almost to the point of nymphomania and welcomes Sal to their whimsical relationship. The three part ways, but later start a journey of traveling across the United States involving a spontaneous freewheeling adventure that includes drugs, sex and bohemianism.

The movie goes into the drinking, marijuana drug use, petty theft, wild Jazz scenes and living day by day while traveling around the country starting in New York City in 1947, getting stopped by police in Virginia, meeting friends in Louisiana, California, Oregon and across the northern half of the USA. Most all of Sal's exploits are mentioned and some are shown in detail. Director Walter Salles (The Motorcycle Diaries) keeps the film true to the times with great locations, sets and costumes.  He also uses filters to give soft visuals of the production, much like Bonnie and Clyde for example.

Salles uses his fine cast to roll out the characters with their wild and free lifestyle.  I am in awe of the performance by Kristen Stewart as Moriarty's gal Mary Lou who lives for sex, booze and pot.  Her craving gets so intense that no matter when her arousal she pleases the man she's with, even while he's driving a car.  This is probably her best role to date, leaving behind her brooding image of the Twilight Saga and molding herself into a real actress.

In the pivotal role of Dean, Garrett Hedlund (Death Sentence) works his character from an easy going child of the 40's and an image of the beat generation to a lost soul who reaches a low point in life.  His wild escapades take him into a world of sexual openness including three ways with the women he meets and even a passing homosexual phase with a close friend. Sales keeps this character true to the book being the stimulus for Sal's writings.

The top accolades go to Sam Riley as Sal, the autobiographical Jack Kerouac, who writes down his adventure in his journey across America.  He's the thread that brings all the characters together while we get an ‘inside out' look at America in an era of growth, showing poverty mixed with wealth.  Riley shows the change in his character as he goes from near innocence to a beatnik lifestyle taking in the jazz filled era while being introduced to drugs, alcohol and sex.

The story is based on real characters in the life of writer Jack Kerouac one of the best American novelists of the ‘Beat Generation' with his fresh outlook on life in a freewheeling society of the 1950's and 1960's.  His death at the age of 47 in St. Petersburg, Florida was the outcome of the wild life he led. He authored a combination of 26 novels and non-fiction books, including a play titled The Beat Generation that was later made into a movie called Pull My Daisy starring Allen Ginsberg.

On the Road has been rated R for strong sexual content, drug use and language.

FINAL ANALYSIS: An extremely good movie for film buffs and indie lovers. (B)