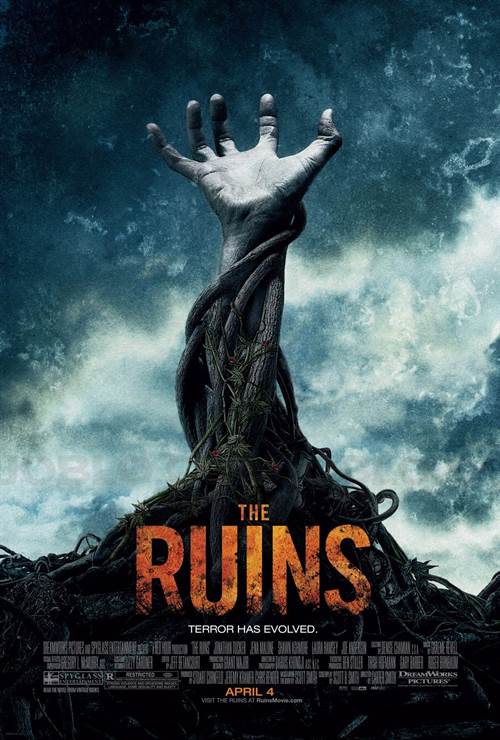 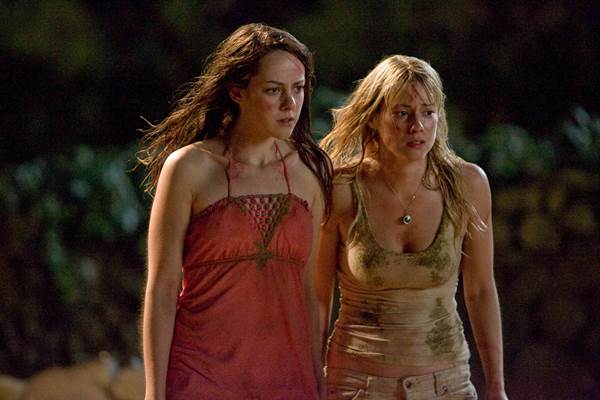 Amy (Jena Malone), Stacy (Laura Ramsey), Jeff (Jonathan Tucker) and Eric (Shawn Ashmore) look for fun during a sunny holiday in Mexico, but they get much more than that after visiting an archaeological dig in the jungle. Carnivorous vines try to ensnare the friends in their tendrils, forcing the group to fight for survival.

Stream The Ruins in Digital HD/4K from the AppleTV store.

The Ruins images are © DreamWorks Studios. All Rights Reserved. 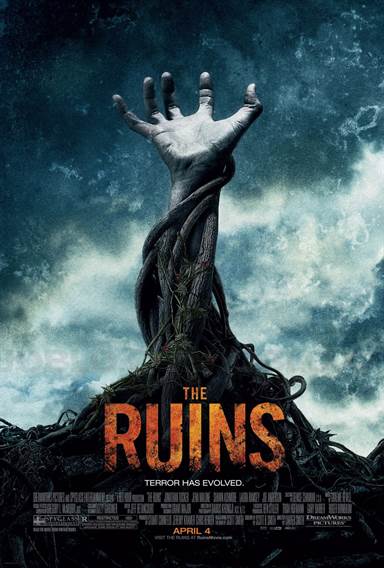 Horror has several elements that make it really sparkle. First, it has to scare you--this should be obvious but there are different kinds of "scared." There's the "Boo" effect when something jumps out at you--cheap slasher flicks go for that one. There's the creepy psychological horror of thinking about terrible or terrifying things. The Ring exemplifies this with its count-down-to-death. There's the "atmosphere of dread" which is frightening in ways that are sort of holistic (I think The Shining achieves this pretty well--I believe that Halloween achieved this too). Let's not forget good old fashioned gore, either. Finally there are just "thrills"--monster movies have monsters that both scare and fascinate us. No one is worried about finding Godzilla under their bed (and, to be fair, that's not really a horror movie either)--but even Carpenter's The Thing (which combined several of these to good effect) also gave us a fascinating look at a creature that it was interesting to watch.

In The Ruins there is, in fact, a "creature"--the plant that lives in the ancient Mayan temple is carnivorous--and eats Solyent Green in it's pre-processed form. On the dinner menu are four college kids on a Mexican vacation and a German tourist who's associated with an archeological force. Mix, stir, and dinner is served.

Horror movies begin with set-up in which not only are the characters established but establishes the unusual circumstances that pre-dispose them to the horror-element. Usually in analysis this is couched as a societal transgression for which they are punished (apparently just being Drew Barrymore counts as a transgression these days)--but punishment or not, the characters wind up face-to-face with something bad.

In The Ruins this takes the form of frolicking college students who get a tip on an ancient Mayan archeological dig that their new German friend is going out to. They frolic a little more and then head out. Once they get to they pyramid they are engaged with 'the horror.' The movie is carried more or less by Jonathan Tucker, the smart, pre-med would be doctor named Jeff. The others (Jena Malone, Shawn Ashmore, Laura Ramsey, and Joe Anderson) give moderately game performances but, um, they haven't got a lot to do. They're playing fairly vapid 20-somethings who are neither all that smart nor all that colorful.

The movie's pacing is also right at the line between smart and "intellectual" (which is not, in the quotes there, a good thing). Each scene gives us a new, unpleasant revelation--but only one of those (the cell phone one) really got to me. Mostly there is a sort of gross survival horror going on (the characters are wounded and have not medical gear, must ration food and water on the top of they pyramid on which they are trapped, etc.). The ratcheting up of the tension is well plotted but seems to fall a bit flat on the screen.

Finally, Ruins is gross. Several good gross-out-and-squick sequences earn it it's R-rating without any of the sex this movie would've had in the 70's. If you want a little taste of it, look at their viral marketing campaign which purports to be a guy on live video who has, for 'science' been growing a plant in their arm.

Overall The Ruins isn't so much smart as 'not dumb.' The acting isn't so much bad as 'just kind of thin,' and the air of horror isn't so much wooden as 'competently unpleasant.' The movie takes itself seriously (perhaps 'too seriously!') and simply manages to deliver its payload without getting the gripping levels of fear I think this material could've offered.