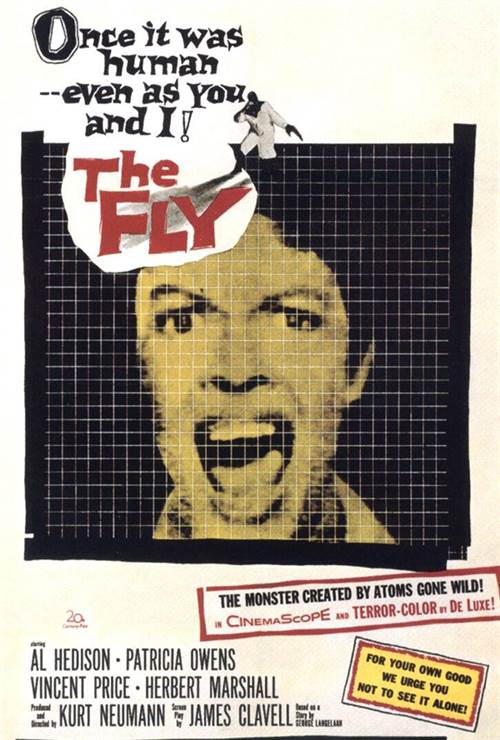 Wealthy Helene Delambre (Patricia Owens) is discovered late at night in the factory owned by her husband Andre (David Hedison). Helene stands beside a huge metal press, which has crushed the head and arm of her husband. Held for murder, the near-catatonic Helene refuses to tell anyone—not even Andre's brother Francois (Vincent Price)—why she did it. Francois cannot help but notice that Helene reacts in mortal terror when a tiny flies zips through the room. Nor can he disregard the statement made by Helene's son Philippe (Charles Herbert) that the fly has a curious white head and leg. When Francois pretends that he's captured the fly, Helene relaxes enough to tell her story. It seems that Andre, a scientist, had been working on a matter transmitter, which he claimed could disintegrate matter, then reintegrate it elsewhere. After a few experiments, Andre tried the transmitter himself. Just as he stepped into the disintegration chamber, a fly also flew into the chamber. We aren't immediately shown the results of this, save for the fact that Andre afterward insists upon keeping his head and arm covered. Alone with her husband, Helene abruptly removes the covering, revealing that Andre now bears the head of a fly! His atoms have become mixed up with the fly, and now he is unable to reverse the procedure. Deciding that his transmitter will be a bogy rather than a blessing to mankind, Andre smashes the apparatus and burns his notes. He then instructs Helene, via body language, to crush his fly-like head and arm in the press. Neither Francois nor inspector Charas (Herbert Marshall) believe the story...until, while staring intently at a spider's web in the garden, they see a tiny entrapped fly with Andre's head and arm, tinnily screaming "Help me! Help me!" as the slavering spider approaches (If you're wondering why Vincent Price and Herbert Marshall do not look one another in the eye during this scene, it is because they couldn't deliver their dialogue without dissolving into laughter). Infinitely subtler than the admittedly excellent 1986 remake, the 1958 The Fly is one of the definitive big-budget horror films of its decade. Best bit: the prismatic "fly's eye view" of the screaming Patricia Owens. The Fly was adapted from George Langelaan's short story by James (Shogun) Clavell.

The Fly images are © 20th Century Fox. All Rights Reserved.

Chris Rebholz
Horror films have often been the poor stepchildren of the film industry, relegated to B-movies or less than stellar production quality, including often less than A-list talent both in front of and behind the camera. Universal may have built much of its early empire on horror flicks like Frankenstein...
Full Review | Grade: A