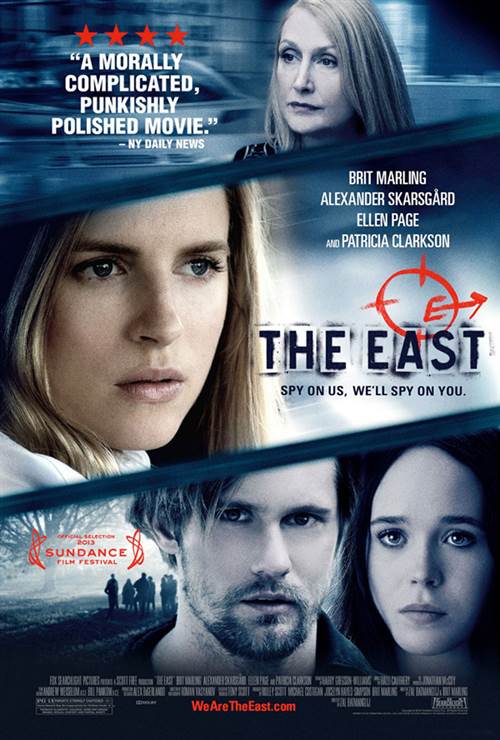 From producer Ridley Scott and directed by Zal Batmanglij comes this taut, sexy thriller starring Brit Marling, Alexander Skarsgård and Ellen Page. An ambitious new recruit at an elite intelligence firm (Marling) is assigned to infiltrate an elusive activist group that terrorizes negligent corporate leaders. The more involved she gets, the greater the risk in this gripping conspiracy story.

Stream The East in Digital HD/4K from the AppleTV store.

The East images are © Fox Searchlight Pictures. All Rights Reserved. 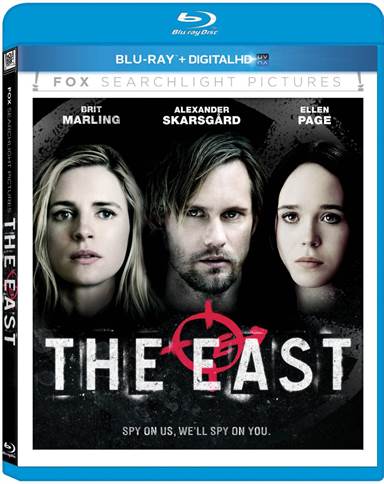 The apple that's bruised on one side, the slightly stale bag of chips, and the carton of milk three days past its "expiration" date. All usually end up in the garbage. A recent NPR article highlights the obvious but too often overlooked paradox: "Hundreds of millions of people go hungry, and yet we waste a whopping 1.43 billion tons of food—one third of what we produce. Food waste is a problem in rich countries and poor countries alike, and it's happening throughout the supply chain—from the farm to the truck to the warehouse to the store to your refrigerator." It's an alarming issue, but one that's typically met with a shrug or, at most, a quickly forgotten sense of concern.

The opposite of this what-can-be-done complacency is the hardcore anti-consumerist "freegan" lifestyle, which involves foraging, dumpster diving, and an emphasis on sharing and community. It's a form of pointed economical anarchy, out to prove there are other ways of living besides the power structures currently in place. In 2009, with the recession in full-swing, aspiring filmmaker Zal Batmanglij and his friend, economics major-turned- writer/actress Brit Marling—who made 2011's micro budget cult drama The Sound of My Voice together—set out to live as freegans for a summer, backpacking with anarchist collectives, sleeping on rooftops, and "reclaiming" discarded food for sustenance. Their experiences inspired their co-written screenplay for The East, a taut eco-thriller where the eco stands both for "ecology" and "economy." It's a smart, taut film, as thought-provoking as it is suspenseful.

Marling stars as Sarah Moss, an ambitious young agent at the Washington, D.C.-based private intelligence firm Hiller-Brood, which serves huge multinational conglomerates by protecting against corporate espionage and sabotage. When a mysterious eco-terrorist cell called The East pulls an eye- for-an-eye prank against an oil company's negligent CEO—they douse his home with black sludge—Sarah petitions her boss (Patricia Clarkson) to let her take the case. Convincing her long-suffering boyfriend (Jason Ritter) that she'll be incommunicado in Dubai for a few months, she actually goes undercover up and down the east coast, backpacking with crust-punks and freegans in an effort to get recruited by the group.

Her "in" is the lipstick-wearing bohemian Luca (Shiloh Fernandez), who takes her to The East's forest hideout—the overgrown shell of a burnt out mansion—where she meets the other key members: wary, hotheaded Izzy (Ellen Page), Doc (Tony Kebbell), a med school student forced to quit his studies after side-effects from an antibiotic left his hands permanently shaky, and Benji (True Blood's Alexander Skarsgård), their charismatic, messiah-like leader. Sarah quickly ingratiates herself, but just as quickly finds her own thinking swayed by the activists' communal, anti-materialist ideas. They live off of what can be scavenged from the bins behind supermarkets. They bathe and feed one another. They're utterly detached from the rat-race of modern life. They have a cause, and their message is convincing.

Their means of delivering it, however, are morally dubious. The group's next "jam" is to give the board members of a pharmaceutical company—the same company that made the drug that ended Doc's career—a literal taste of their own medicine, spiking the champagne at a party celebrating the scoring of a lucrative government contract. The dosage is high enough to cause severe issues, which raises the questions—is it worth making an example of a few execs that have turned a blind eye to the safety of their product if it can protect the thousands of patients who would've taken it? When, if ever, is violent activism justified? What does it take to wake people up?

The East offers no easy answers, and wisely lets the viewer come to his or her own conclusions. The aim here is not to convince us that one way is right, but to remind us that these complex and easily ignored ethical/metaphysical problems—how to live a good life, how to confront injustice, how to be—are worthy of more consideration than we normally give them. If this sounds pedantic, it's not, simply because the philosophizing is couched inside such a good story, with fascinating characters and intricate arcs. There's Sarah's strained relationship with her boyfriend, and the way she has trouble readjusting to "normal" life when The East goes on a temporary hiatus. There are friction-y intragroup dynamics and an expected, but well-done romantic element between Sarah and the dreamy, idealistic Benji. And as the danger mounts with each new "jam," The East hums with energy.

There's a definite atmosphere here, an earthy, haunted sadness over the inability to right the world's wrongs and live—truly live—with some kind of purity. And while this is no big-budget thriller, it's very rich in production design and performance quality. We've seen Ellen Page as a spunky firebrand before, but never with this much lived- in intensity. Skarsgård smolders, and Brit Marling—who came out of nowhere in Another Earth—once again proves to be a magnetic presence on screen, tough and vulnerable, gorgeous and smart. She and Batmanglij seem to be mutual muses, and their latest effort together is certainly inspired.

Together, they've crafted a film that looks far more expensive than it actually is. The movie's 1080p/AVC-encoded Blu-ray transfer is start-to-finish gorgeous, with no picture quality distractions. What impresses most is just how sharp the footage is; fine detail is visible in every frame, with near- palpable facial and clothing textures. The color grading is excellent too; highlights are creamy and roll-off nicely, and the slightly warm cast in most scenes gives off an appropriately autumnal vibe. The film features a lossless DTS-HD Master Audio 5.1 surround track that's quiet but well-designed, filled with the immersive ambience of chirping birds, leaf-rustling wind, and other outdoorsy noises.

Parts of The East smack of other recent films—Children of Men, Martha Marcy May Marlene—but the movie's cumulative effect is original and bracing. It's one of those rare thrillers that are tense, dramatically substantive, and thought-provoking, and filmmaking partner's Zal Batmanglij and Brit Marling have pulled all this off on a relatively minuscule budget. The East underperformed at the box office earlier this year, but it definitely deserves a wider audience on home video. 20th Century Fox's Blu-ray release is all-around strong, with an ultra-sharp 1080p transfer, a deft audio track, and a worthwhile collection of behind-the-scenes featurettes.