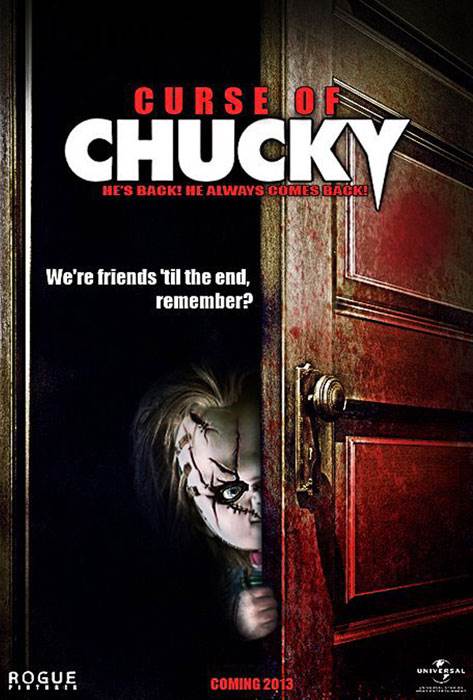 He’s back! From the filmmakers that brought you Chucky comes the terrifying return of the pint-sized doll possessed by the spirit of a notorious serial killer. When a mysterious package arrives at the house of Nica (Fiona Dourif, True Blood), she doesn’t give it much thought. However, after her mother’s mysterious death, Nica begins to suspect that the talking, red-haired doll her visiting niece has been playing with may be the key to the ensuing bloodshed and chaos. The return of America’s favorite toy, voiced again by Brad Dourif, is unrated and full of more blood-splattered thrills and chills.

Stream Curse of Chucky in Digital HD/4K from the AppleTV store.

Curse of Chucky images are © Universal Pictures. All Rights Reserved. 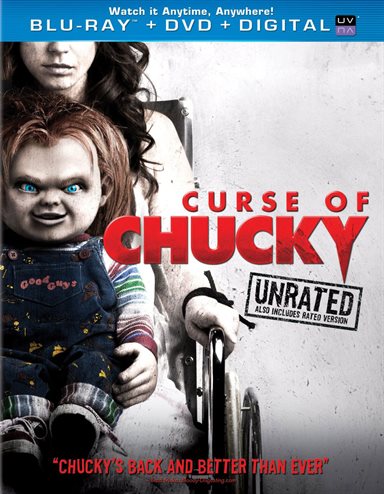 Putting another stunner on the home screen, Curse of Chucky gets released on Blu-ray/DVD + Digital combo pack just in time for the horror season.  Packed with the kind of biting power needed to provide chills and thrills, the sixth of the Child's Play films changes it up a bit giving viewers a blast to the past.  Could this 25th anniversary of the beginning be the last of the Chucky doll rampages? I think not.

In this sequel we find Nica (Fiona Dourif), a wheelchair bound young woman under the care of her mother living in a rural Gothic house.  The doorbell rings and Nica accepts a package addressed to her mother.  Upon opening the package we see the red haired doll we all have come to know as Chucky.  Her mother thinks it's a prank and throws the doll into the garbage can.

Mom is found dead the next day and a funeral takes place with Nica's sister Barb (Danielle Bisutti) and her husband Ian (Brennan Elliott) with Jill (Maitland McConnel) the nanny for Barbara's seven year old daughter Alice (Summer Howell) in attendance.  Father Frank (A Martinez) gives the eulogy at graveside and the prayers at the dinner table that evening.

When the bodies start mounting up, Nica finds herself fighting off the ghost in the doll.  Don Mancini who wrote all the Chucky/Childs Play scripts and has directed this terror ditty and Seed of Chucky takes his time with this wacky installment.  Although he jumps into the fray right away with the slicing and dicing, Mancini does a better job of developing his characters before killing them off.  Improving Chucky's appearance a bit, his mobility a lot and the doll's wise cracking vocabulary a plenty, Mancini makes the Ginger even more sinister than its past performances.

But, Mancini takes it all a step further bringing back actor Brad Dourif the guy who started it all and has remained the voice of Chucky in all six films since the beginning.  You may know Brad from other famous flicks as he played Sheriff Lee Brackett in Halloween 1 and 2, Grima Wormtongue in The Lord of the Rings: The Two Towers & Return of the King.  Here he brings back some of the memories of the first Child's Play in his live action role as the crazy serial killer Charles Lee Ray; then showing how he's connected with all the events taking place at Nica's home.

The horror reaches the top of a thermometer pausing slightly before it bursts blood red all over the Gothic mansion in the woods.  Putting together superb stunt players, realistic sets, amazing puppetry and some very creative camera work Mancini brings what fright seekers want, a lot of mayhem and sudden appearances of the hideous Chucky in this gory slasher film that just keeps on giving. Make sure you watch to the end of the credits for a final scene that ties up loose ends for Charles Lee Ray.

Curse of Chucky has been rated R by the MPAA for bloody horror violence, and for language. If you choose the unrated version that's also included on the Blu-ray disc, you will experience more blood-spattered thrills and chills according to the marketing statement on the box. Since I watched the unrated version like most people will I didn't have time to watch it again to compare before writing this review.  However, there is a one minute run time difference between the rated and unrated version so they aren't telling an untruth.  If anyone does take the time to compare, please let me know what I saw differently because after the first slashing the murders all seem to run together.

The bonus features are plenty and take on a lot of interesting topics.

The video quality of the Blu-ray is excellent played on a HD television 16x9 with the 1.78:1 aspect ratio I crave.  It fills the whole screen top to bottom, side to side.  The colors are vibrant (blood is very dark red, brain matter rosy) images crystal clear and the interior shots nicely lighted for the fear effect.  Close-ups are in perfect focus and the camera work is so good you can't tell Chucky is a puppet (um… or whether it's a real person in a Chucky outfit…just saying).

The sound quality with the DTS-HD Master Audio 5.1 comes into your living room clean and clear.  Not a bit of dialogue is lost and the thrills from the eerie sound track combined with surround keep the film in the fright zone.

Take Curse of Chucky home with you and play it with the TV facing the front door Halloween night and see how many want to come in and watch the little devil do his bloody deeds.  But, you do know I'm only kidding right?

FINAL ANALYSIS: A best bet for a scary night being with your favorite doll or friend or husband or the cop next door or two cops at the front and one by the rear entry for comfort. (A-)