Home / Movie Database / Voyage to the Bottom of the Sea Walter Pidgeon is the nominal star of Voyage to the Bottom of the Sea, portraying Admiral Harriman Nelson, the designer of the submarine Seaview, a glass-nosed research submarine. The sub embarks on her shakedown cruise under the polar ice cap as the movie begins. Upon surfacing, however, the crew discovers that the entire sky is on fire -- the Van Allen radiation belt has been ignited by a freak meteor shower, and the Earth is being slowly burnt to a cinder. Nelson and his colleague, Commodore Lucius Emery Peter Lorre, devise a plan to extinguish the belt using one of the Seaview's nuclear missiles, but they are denounced at an emergency meeting of the United Nations. Disregarding the UN vote against him, Nelson decides to go forward with his plan before the Earth is destroyed, hoping to get the approval of the president of the United States while his ship races from New York to the Marianas in the Pacific to launch its missile on time and target, with the world's navies hunting her down and communication with Washington impossible because of the fire in the sky. Nelson must combat not only the threats from other ships but also the doubts of his own protégé, Commander Lee Crane Robert Sterling, the captain of the Seaview, about his plan and his methods, and the growing suspicion -- being spread by Dr. Susan Hiller Joan Fontaine, a psychiatrist who was visiting the vessel -- about his sanity, as well as the growing discontent of the crew, who would like to see their families before the end of the world, and the presence of one religious fanatic Michael Ansara who thinks the fire in the sky is God's will. Worse still, there appears to be a saboteur -- and possibly more than one -- aboard. The plot is episodic in pacing and features elements that were clearly derived in inspiration from Disney's 1954 production of Twenty Thousand Leagues Under the Sea, such as Nelson's eccentricity and the "outlaw" status of his ship; but the undersea maneuvers to tap the trans-Atlantic telephone cable in order to reach Washington, the battle with a giant squid, a duel with an attack submarine, and a harrowing tangle with a WWII mine field would become standard elements of the series of the same name that followed this movie two years later. Pidgeon brings dignity if not a huge amount of energy to the role of the admiral, and Lorre, Fontaine, Ansara, and Henry Daniell playing Nelson's scientific nemesis add some colorful performances, and Barbara Eden, as Nelson's secretary, is pretty to look at; and there are some excellent supporting performances by Delbert Monroe aka Del Monroe, who appeared later in the series, as Kowalsky, Mark Slade, John Litel, Howard McNear, and Robert Easton.

Purchase DVD/Blu-ray/4K UHD physical copy of Voyage to the Bottom of the Sea today at Amazon.com

Voyage to the Bottom of the Sea images are © 20th Century Studios. All Rights Reserved.

Voyage to the Bottom of the Sea Blu-ray Review 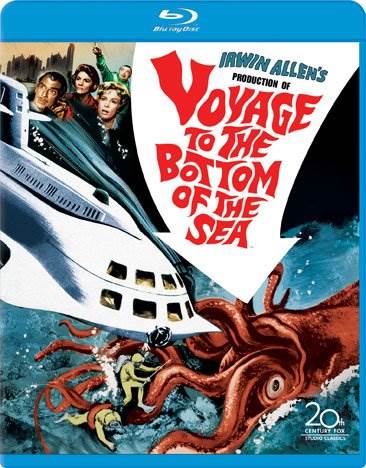 While Irwin Allen's name will probably forever be associated with the disaster genre which he helped to formulate with such epochal films as The Poseidon Adventure and The Towering Inferno, for hordes of Baby Boomers he's at least as much remembered for a glut of sixties and early seventies television science fiction outings, including Lost in Space, The Time Tunnel and Land of the Giants. Allen's first foray into series television was a reboot of one of his first "disaster" films, 1961's Voyage to the Bottom of the Sea. While the television version verged perilously close to camp, especially in its later years, the film was a rather serious minded, though admittedly hammy, adventure flick that depicted an unlikely effort on the part of the crew of the nuclear powered "super submarine" Seaview to prevent a global calamity which for all intents and purposes might be termed global warming. While 1961 was probably too early to have the culprit be Man himself, the end result was much the same. The Earth in Voyage to the Bottom of the Sea is literally burning up, and humankind only has a few precious weeks of life left. The Seaview may be Mankind's last, best hope in an attempt to thwart a catastrophe caused by meteors igniting the Van Allen Radiation Belt. As that very plot element might indicate, parts of Voyage to the Bottom of the Sea are of dubious scientific merit, but they don't keep the film from being a rollicking good time, with a couple of exciting set pieces thrown in for good measure.

The Seaview makes an impressively grand entrance at the close of the credits sequence of Voyage to the Bottom of the Sea, bursting up through the strangely placid waters of the North Pole, with a barrier of ice forming a glacial background. Of course it's all a tank scene done with a miniature, but it sets the pace for some generally impressive practical effects that give the film its own special character. While a parade of international headlines announces that the Seaview is thought of as a huge boondoggle, the audience may in fact be thinking, "Well, at least it's a really cool looking boondoggle".

The Seaview is the brainchild of the felicitously named Admiral Nelson (Walter Pidgeon), though in this case his first name is Harriman not Horatio. Nelson is a career naval officer who has devoted his later life to making the Seaview a reality, though he's surrounded by people—including members of the American government—who aren't exactly convinced that Nelson's idea has merit. At least Nelson's Captain, Lee Crane (Robert Sterling), is a true blue loyalist and a well skilled commander to boot. The crew of the sub includes a randy young trumpet playing Lieutenant named Danny Romano (Frankie Avalon), Nelson's rather comely secretary, Lt. Cathy Connors (Barbara Eden), who is romantically involved with Crane, and the ship's medical officer, Dr. Jamieson (Regis Toomey). A retired Commodore named Emery (Peter Lorre) is also on board, working with a "pet shark" of sorts.

But Nelson has also invited a gaggle of dignitaries to see the Seaview in action, and these include a noted psychiatrist named Dr. Susan Hiller (Joan Fontaine) and befuddled Congressman named Llewellyn Parker (Howard McNear, who played Floyd the Barber on The Andy Griffith Show). What was meant to be an exciting but relatively routine trek through the underwater regions of the Arctic is thrown for a loop when the sub is hit by giant chunks of ice (which defy the laws of physics and sink in the water). When the sub surfaces, Nelson is horrified to discover that the atmosphere seems to be burning up, with the entire area bathed in an eerie red light. While the team is able to rescue a stranded scientist named Alvarez (Michael Ansara, Eden's real life husband), they are baffled by the phenomenon until radio contact provides them the answer: the Van Allen Radiation Belt has caught fire, and the Earth is more than likely doomed. Despite much pooh-poohing by a variety of experts, Nelson is absolutely convinced the Seaview can confront and defeat the fiery menace.

A lot of Voyage to the Bottom of the Sea is going to probably seem rather typical to younger viewers, especially since so many of the film's tropes have been echoed through the intervening years (frequently by Allen himself). Voyage to the Bottom of the Sea was actually the first of these (in the sixties, at least), positing a bunch of disparate characters on board a cloistered ship, with two resolute males leading the troops, at least one gorgeous female providing requisite eye candy, a colorful (sometimes foreign) supporting character, and, just for good measure, a saboteur working against the mission.

While decidedly old fashioned at times, the film also has a surprisingly prescient quality for modern day viewers, with environmental disasters seemingly a part of everyday life, whether manmade or an "Act of God". Voyage to the Bottom of the Sea does tend to get a bit silly at times (the undersea fight with the giant squid is pretty shoddy looking, not even rising to the now quaint looking bar set by Disney's 20,000 Leagues Under the Sea), but it's still a lot of fun if taken in the right undemanding spirit. The science may be ludicrous, but the fiction is still quite engaging.

Voyage to the Bottom of the Sea is presented on Blu-ray courtesy of 20th Century Fox Home Entertainment with an AVC encoded 1080p transfer. This is another generally very commendable looking transfer of a 'Scope film that benefits from elements in very good shape. The image, while not razor sharp, is well defined and precise, with excellent fine detail showing up in things like Fontaine's tufted dresses and some of the props aboard the Seaview. Voyage to the Bottom of the Sea features a lossless DTS-HD Master Audio 4.0 track which quite faithfully reproduces the film's original 4 track stereo mix. The best part of this track is the wonderfully consistent surround activity with regard to the great sound effects. The "ping" of radar and gurgling sounds of water wash through the side channels, and even routine dialogue moments are given great spatial clarity and directionality.

Voyage to the Bottom of the Sea is good old fashioned entertainment, with some winning star performances, a fun (if scientifically absurd) plot, and lots and lots of bells and whistles. This is another older film which is probably going to get its fair share of rolled eyes from cynical younger folks used to flashier, noisier fare, but for those who saw it either theatrically or on television back in the day, the nostalgia factor will outweigh any other passing qualms. This is a generally nice looking and great sounding presentation and is definitely worth checking out.