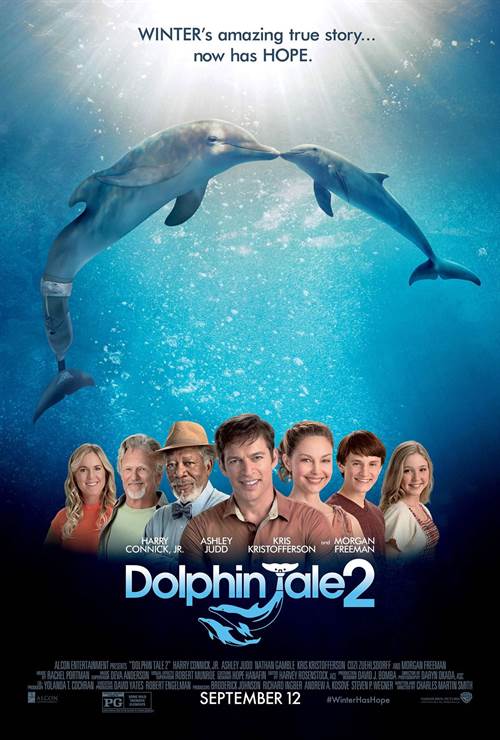 Warner Bros. Pictures and Alcon Entertainment’s “Dolphin Tale 2” continues the story of the brave dolphin Winter, whose miraculous rescue and recovery—thanks to a groundbreaking prosthetic tail—made her a symbol of hope and perseverance to people around the world and inspired the 2011 family hit movie “Dolphin Tale.”
The film reunites the entire main cast, led by Harry Connick, Jr., Oscar® winner Morgan Freeman (“Million Dollar Baby”), Ashley Judd, Kris Kristofferson, Nathan Gamble, Cozi Zuehlsdorff, Austin Stowell, and, of course, the remarkable dolphin Winter as herself. Charles Martin Smith, who directed “Dolphin Tale,” wrote the sequel and is again at the helm.

It has been several years since young Sawyer Nelson (Gamble) and the dedicated team at the Clearwater Marine Hospital, headed by Dr. Clay Haskett (Connick, Jr.), rescued Winter. With the help of Dr. Cameron McCarthy (Freeman), who developed a unique prosthetic tail for the injured dolphin, they were able to save her life.

Yet their fight is not over. Winter’s surrogate mother, the very elderly dolphin Panama, has passed away, leaving Winter without the only poolmate she has ever known. However, the loss of Panama may have even greater repercussions for Winter, who, according to USDA regulations, cannot be housed alone, as dolphins’ social behavior requires them to be paired with other dolphins. Time is running out to find a companion for her before the team at Clearwater loses their beloved Winter to another aquarium.

Reprising their roles, Kristofferson plays Clay’s father, Reed; Zuehlsdorff is Clay’s teenage daughter, Hazel; Judd returns as Sawyer’s mom, Lorraine; and Stowell plays Sawyer’s cousin, Kyle. Champion surfer Bethany Hamilton, who herself has been an example of courage, appears as herself in the film.

Oscar® nominees Andrew A. Kosove and Broderick Johnson (“The Blind Side”) are producing the film together with Alcon President of Worldwide Marketing, Richard Ingber, who brought the first project to the Company.

Inspired by true events, “Dolphin Tale 2” is being filmed at the Clearwater Marine Aquarium, the non-profit rescue and rehabilitation facility that Winter calls home.

Allison Rose
Dolphin Tail 2 engages the audience from the beginning and keeps us watching.
Full Review | Grade: B