Home / Movie Database / George A. Romero's Diary of the Dead 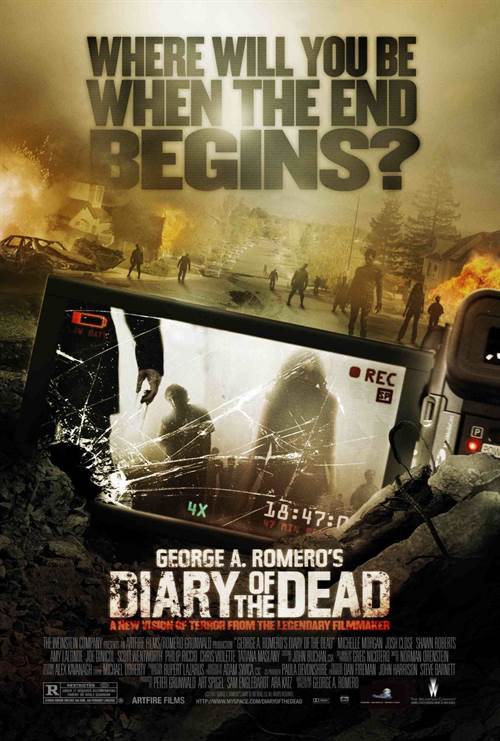 George A. Romero's Diary of the Dead Synopsis 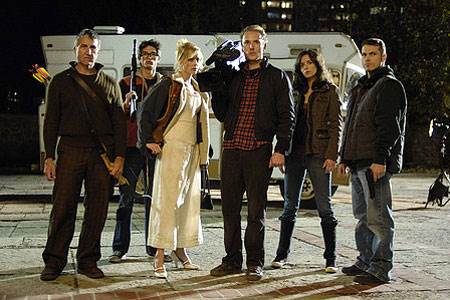 When a group of film students making a horror movie in the woods discovers that the dead have begun to revive, they turn their cameras on the real-life horrors that suddenly confront them, creating a first person diary of their bloody encounters and the disintegration of everything they hold dear.

Purchase DVD/Blu-ray/4K UHD physical copy of George A. Romero's Diary of the Dead today at Amazon.com

Stream George A. Romero's Diary of the Dead in Digital HD/4K from the AppleTV store.

George A. Romero's Diary of the Dead images are © Weinstein Company, The. All Rights Reserved.


Weinstein Company Picks Up George Romero Diary of the Dead  9/13/2007 11:00 AM EST
According to The Hollywood Reporter, Diary of the Dead, the new film by George Romero, has been picked up for distribution in North America and Mexico by The Weinstein Company.The latest zombie movie by Romero will chronicle the beginning of the living dead outbreak, with student filmmakers at the helm of telling the story. They will show exactly what happened as the outbreak was first starting to...  More>>

George A. Romero's Diary of the Dead Theatrical Review 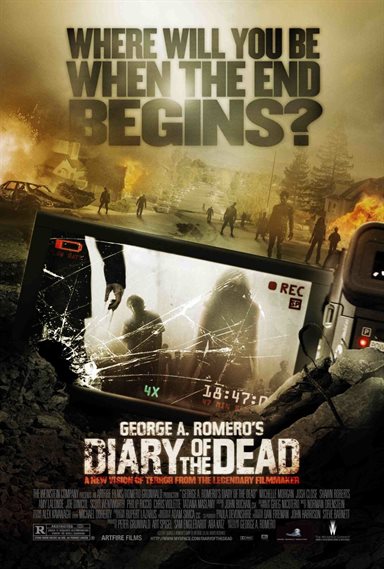 All the cool kids are shooting video on their phones and using handcams these days so when Romero goes for a reboot of his moribund Dead franchise he picks up where Cloverfield left off: a bunch of students with digital cameras film the awakening of the dead as it directly impacts them.

You can tell something about the cleverness or the budget of the creators of a zombie movie by its "empty scenes"--at various points in the narrative the characters will come across a city that has been cleaned out by the zombie-plague and you'll see stunning vistas of urban emptiness. I heard someone was filming a zombie film around Chernobyl because it has perfectly good, perfectly empty urban areas. That's brilliant. In Diary we get mostly back-roads--which is not as fascinating.

The concept is interesting: these kids, glued to their cameras even while being assaulted by the undead, are using the Internet to create a video history of what's going on. That's a cool idea--the other innovation is that the action takes place within the context of a road-trip where they are trying to get home ... or to safety in a recreational vehicle. This avoids the "soggy" dug-in middle zombie movies have since the characters are on the move all the time.

Less interesting is the way the movie uses the conceit of the film as a finished documentary to which the creator has, at time, added sound--and lots of editing in order to make it seem like a real movie. It seems a bit too much like a real movie with a young cast that is only somewhat convincing. That's a good thing: the zomb-pocalypse is a global tragedy where you sometimes need to kill your parents, friends, or children (a little of that happens in Diary but it is not overwrought). Facing this the script has to either look it square in the face or somehow avoid it altogether. I think 28 Days Later did a good job of looking at it. Day of the Dead just gives us army guys on humanity's last base.

Diary of the Dead sort of walks the line. Young people with video cameras are not as sympathetic as they might be so we don't get a deep sense of feeling for them--although I think we can imagine how we might feel in their place--but I think the movie makes a few too many cuts. We have the "bite" scene where a character is bit and we know what will happen but the characters don't. I'd rather they have learned from the Internet than the simple cut-scene to the character dead and the others knowing he'll come back. It, like a zombie, is a bit bloodless.

There's also some man's-inhumanity-to-man thrown in--but again, in a pretty toothless fashion: people in Diary are not that bad. In 28 Days the army guys were pretty ruthless and evil. In Diary the bad guys (and there are good guys too) settle for a lot less than the 28 Days crowd wanted. Yes: there is some man's-inhumanity-to-zombie--in fact, the film ends with it moderately powerfully--but on the whole I think that Diary actually suffers for not having more teeth.

It's not that I want sympathetic characters destroyed on screen by an unspeakable end-of-days tragedy--it's that the situation in the film seems to demand it and at the end I felt somewhat depressed but not really horrified. As with the middle-road that Diary walks elsewhere, the end of it is a bit ambiguous. It certainly doesn't seem possible to turn out well for the surviving protagonists but it isn't the catastrophic end it could've been ... nor is there really hope either.

Romero, I think, wants to make more of these films and we can see some less-than-believable pieces of "social commentary" put in. This counterpoints the cases where the camera-isn't-looking-in-the-right-place verisimilitude that we sometimes get (but, again, not enough of). I can see that he could get a long string of zombie movies but I'm going to want to wait for World War Z (if anyone ever makes it) as the next "thing" in the zombie canon.

Diary of the Dead, like the student film-project it purports to be, is overly ambitious and doesn't completely fulfill its requirements. It isn't a bad zombie movie but it seems to sort of just lumber along. It needs more energy ... more liveliness, yes, like it's monsters.