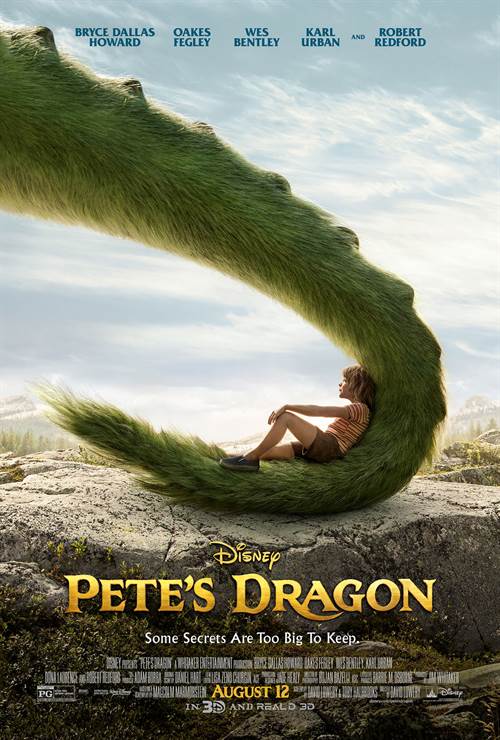 For years, old wood carver Mr. Meacham (Robert Redford) has delighted local children with his tales of the fierce dragon that resides deep in the woods of the Pacific Northwest. To his daughter, Grace (Bryce Dallas Howard), who works as a forest ranger, these stories are little more than tall tales…until she meets Pete (Oakes Fegley). Pete is a mysterious 10-year-old with no family and no home who claims to live in the woods with a giant, green dragon named Elliott. And from Pete’s descriptions, Elliott seems remarkably similar to the dragon from Mr. Meacham’s stories. With the help of Natalie (Oona Laurence), an 11-year-old girl whose father Jack (Wes Bentley) owns the local lumber mill, Grace sets out to determine where Pete came from, where he belongs, and the truth about this dragon.

Stream Pete's Dragon in Digital HD/4K from the AppleTV store.

Listen to the Pete's Dragon soundtrack on Apple Music. 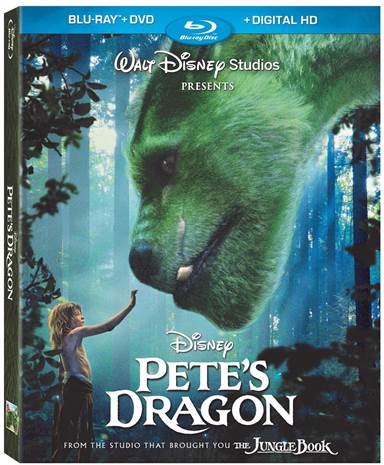 A young boy is in the car, reading his book in the back seat, out loud.  His dad is driving and his mom is helping him with the big words in the book.  Dad explains what an adventure is and then the car turns upside down and taking the little boy's world with it.   Beginning in 1977, the little boy, Pete, finds a strange friend in the forest he wanders into, one who becomes both mother and father, protector and friend in a very unique looking package.

Fantasy galore, and some magic thrown in for good luck, Pete's Dragon is a wonderful family friendly movie that soon progresses a few years into the future.  Pete (Oakes Fegley; Fort Bliss, Person of Interest), now a "feral" boy, raised by his ‘magic" dragon, named Elliot, is finally discovered in the woods by lumberjacks and a little girl named Natalie. After a chase through the woods, Pete wakes in a hospital and draws a picture of Elliott, his dragon and friend.  Unable to bear the thought of leaving this little boy alone, Park Ranger Grace Meacham (Bryce Dallas Howard; Twilight New Moon) brings Pete to spend the night at her home.  Pete draws a picture of Elliott and that is when the iron strikes hot. Grace's dad, Mr. Meacham (Robert Redford;  Up Close and Personal, Indecent Proposal) reported seeing dragons years before and no one ever believed him.  Grace shows her father the picture of Pete's dragon and has a long overdue discussion with her dad, where she realizes that maybe- just maybe- her dad isn't so crazy, after all.

Unfortunately, Grace and Mr. Meacham aren't the only ones that find out about Elliott, from Pete.  Devastatingly, the lumberjacks, led by Gavin (Karl Urban; Dredd), Grace's own family, decide to seek out the dragon and catch him, tranquilize him and bring him back so they can use Elliott for their own adventure.   Pete, Natalie, Grace and Mr. Meacham all work together to free Elliott, but this only angers Gavin, who chases them down.   Unfortunately, Elliott is unable to fly after being tranquilized and starts shooting fire at the police during a stand off, and ends up melting the bridge where Grace and her fiancé, Jack's truck was located – with them inside.  Of course, our chameleon like dragon saves them but becomes so frightened afterwards, that he escapes with Pete on his back and flies back to the forest.  Realizing that the only way to keep Elliot safe to is leave him, Pete ends up living with and being adopted by both Grace and Jack, soon after they get married.  At the end of the movie, the new happy family visits Elliot and finds that he has found a new dragon family.  Guess Mr. Meacham wasn't so crazy, after all.

Director David Lowery and Producer James Whitaker did a fabulous job with Pete's Dragon, as did writers Lowery and Toby Halbrooks with the screenplay.  The movie flowed, dialogue was natural, and scenes unfolded effortlessly into one another.  This movie works as a family movie, as well as a first date movie.  You may even have a happy tear or two drift down your cheek at the very end.

Besides this heart-warming production, the Blu-Ray features many added bonuses.  One of my all-time favorites on a Blu-Ray is the full feature length commentary by the director and actors.  It's fascinating to watch the movie without the sound track and hear the reasons why a scene is being played out at the moment you watch the actual scene.  Other bonus features, just as important, are:


The Blu-ray is shown in MPEG-4AVC with a 1080p resolution and an aspect ratio of 2.40.1.  While the colors were sometimes almost dull looking in places, it was apropos as the movie is set in the early to mid 1980s, when Pete is 11 years old. It felt purposefully done, rater than a reflection of poor video quality.  In contrast, Elliot is presented in brilliant colors and his chameleon fades are so remarkable that everything works together to remind the audience that this isn't set in the 21st Century.  It successfully brings the viewers back to a slightly earlier time, when life was just a little different than the hustle and bustle of today.  The audio is DTS-HD Master Audio 7.01.  Background music was clear and not overpowering, and the dialogue could be heard through the music and sound effects.  One will never strain to hear this movie.

Overall, with the added bonus features, Disney's Pete's Dragon is a great value to add to any Blu-Ray/Digital collection. This is a movie that can be enjoyed by all generations.