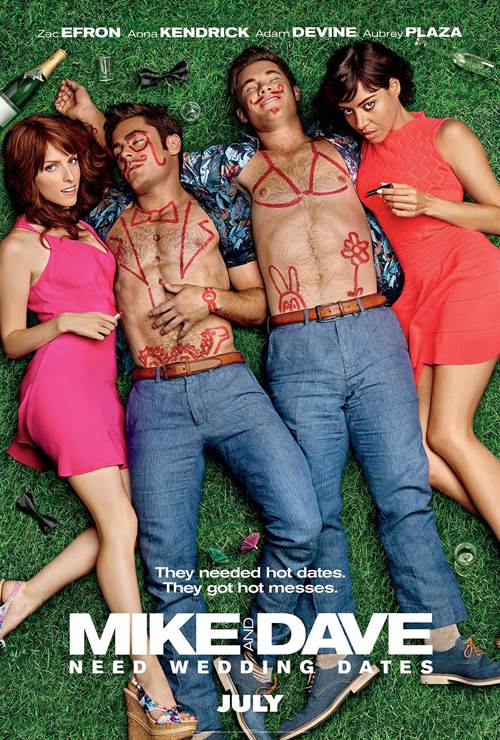 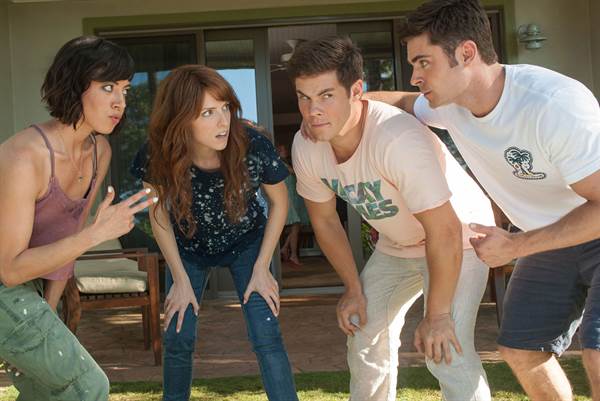 Hard-partying brothers Mike (Adam Devine) and Dave (Zac Efron) place an online ad to find the perfect dates (Anna Kendrick, Aubrey Plaza) for their sister's Hawaiian wedding. Hoping for a wild getaway, the boys instead find themselves outsmarted and out-partied by the uncontrollable duo. 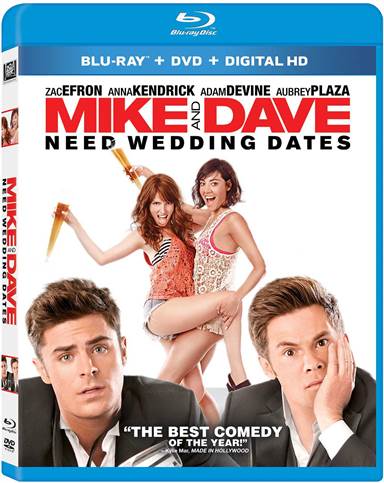 In a case of life imitating art comes the 20th Century Fox comedy, Mike and Dave Need Wedding Dates.  Mike (Adam Devine; Pitch Perfect) and Dave (Zac Effron; Neighbors) are brothers who are known for being the life of the party, but when their sister gets engaged, their parents inform them that they each need to bring dates to the wedding, and that they need to be respectable. This is actually an adaptation of the real life events (though not as humorous) of Mike and Dave Stangle who took out an ad on Craig's list trying to find dates.

In comes Alice (Anna Kendrick; Up In The Air) and Tatiana (Aubry Plaza; Parks and Recreation), two girls who both have issues themselves.  Alice has never gotten over being left at the altar and Tatiana is her best friend who also doesn't have much going on in her life and seems to have commitment and intimacy problems. The ladies manage to trick Mike and Dave into thinking they are "good girls" in order for the guys to pony up an all-expenses paid vacation to Hawaii.  Once there however, Alice and Tatiana's true nature comes out and they mess up Mike and Dave's plan and the sister's wedding.

With a star studded cast, this movie should have been a smash hit; however, the movie barely squeaked by this summer with a domestic box total of $46 million dollars. Zac Efron is a bright point in this film, with his charismatic charm that shines through in every role he takes. While most would think that Anna Kendrick would steal the female lead of the film, that was just not the case this time around. Surprisingly, it was Aubry Plaza who took the spotlight. Her comedic timing was spot on and one can not stop but laugh at the hijinks that she pulls off on film. The rest of the cast is pretty much going through the motions. The other two leads, Anna Kendrick and Adam Devine, really do not add much to the film. Their jokes are really not that funny and their dialog really doesn't add much to move the plot along.

Mike and Dave Need Wedding Dates is presented in 1080p AVC with a 2.39:1 aspect ratio. The quality is so good the tropical paradise presented in the film literally jumps off the screen. Colors are full and vibrant and blacks are spot on. There is zero image distortion throughout the entire presentation as well. While comedies are not normally not known for the great audio soundtrack, Mike and Dave Need Wedding Dates goes above and beyond in this department. The DTS-HD Master Audio 7.1 is superb. The dialog is crisp and clear and special effects during the comedic action scenes will shake and rock your living room by using the full dynamic range of all speakers in your system.

20th Century Fox went all out on the special features included on the Mike and Dave Need Wedding Dates combo pack, including a Digital HD copy of the film, Deleted Scenes, Extended Scenes , An Alternate Storyline featuring a roasted pig that had sporadic scenes interspersed throughout the film, multiple gag reels and improv lines, Funny or Die Shorts that aired during the marketing of the film, commentary with director Jake Szymanski, a still photo gallery, and the theatrical trailer.

Mike and Dave Need Wedding Dates does seem to work better on the small screen. In the theater, where one expects grandiose and larger than life pictures, this one just didn't have the power to bring people in.  However, now that it is on the home entertainment market, the film might have new life. While it is not a movie that I can foresee people watching over and over, it is a nice film to watch one day or evening when you are bored and have nothing else to do.