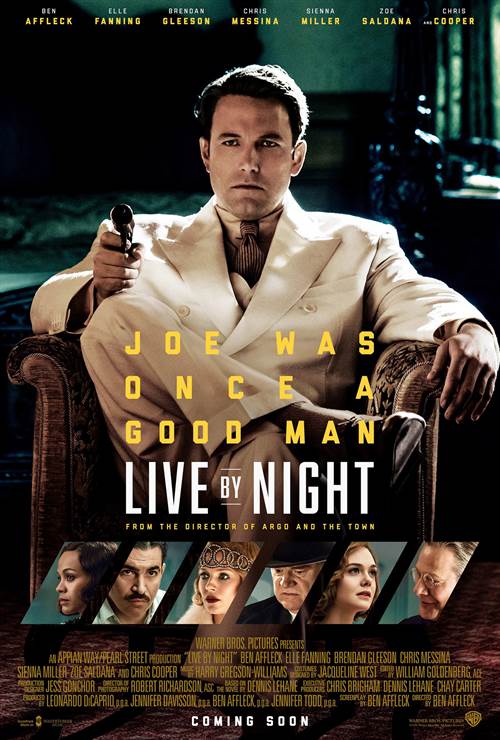 “Live by Night” is set in the roaring `20s when Prohibition hasn’t stopped the flow of booze in an underground network of gangster-run speakeasies. The opportunity to gain power and money is there for any man with enough ambition and nerve and Joe Coughlin, the son of the Boston Police Superintendent, long ago turned his back on his strict upbringing for the spoils of being an outlaw. But even among criminals there are rules and Joe breaks a big one: crossing a powerful mob boss by stealing his money and his moll. The fiery affair ends in tragedy, setting Joe on a path of revenge, ambition, romance and betrayal that propels him out of Boston and up the ladder of Tampa’s steamy rum-running underworld.

Stream Live By Night in Digital HD/4K from the AppleTV store. 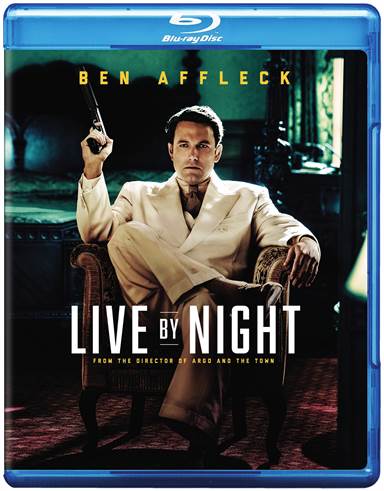 Ben Affleck can be hit or miss as an actor, director, and writer. Argo was masterfully shot and Gone Baby, Gone and The Town were beautifully written and all three engaged audiences and left us feeling emotionally spent.  Even his acting talents don't go to waste in The Accountant, so it's only natural to assume a work with Affleck's name attached will be top shelf entertainment.  Unfortunately, we can't always have a winner and for Ben, Live By Night is that film.

Coming to Blu-ray this week, it tells the story of outlaw Joe Coughlin (Affleck), an all around generally bad guy who gets mixed up with the mob.  Joe loved Emma (Sienna Miller; Burnt), who was the girlfriend of a local mob boss.  When he found out about the lovers, he left Joe for dead and supposedly had Emma killed. That turn of events led Joe into business with another mobster who had Joe and Dion Bartolo (Chris Messina; The Newsroom) take over the liquor business in south Florida.

While there, Joe falls in love with a Cuban woman named Graciela (Zoe Saldana; Star Trek).  Unfortunately, his old mob boss had the liquor business in South Florida and doesn't look too kindly on Joe taking it over.  Adding to the tension, this story takes place during prohibition so the Ku Klux Klan are against Joe and Graciela and make trouble whenever they possibly can. Well, when Joe had finally had enough, he takes matters into his own hands and ends both mob bosses and leaves Bartolo in charge.

Affleck has a knack for picking talent and Live By Night is no exception.  Miller and Saldana are well cast playing strong women with minds of their own and both do a terrific job.  Messina is perfect as the mob underling who likes his work a little too much.  Chris Cooper (The Town), as the dirty police chief, Figgis, is certainly likable and Elle Fanning (20th Century Women) as his daughter, Loretta, who loses her way then finds the Lord and causes all kinds of trouble for Joe, has an ethereal quality about her that makes her believable as the young maiden.

At first, I thought the problem with the film was with the script but then I realized it was the direction.  Affleck missed the mark on this one, which is a shame.  The story moves around too much and Affleck doesn't do enough to delineate the changes of location.  He also tries to pack too many plotlines into two hours, so nothing stands out and it is all muddled together in one jumbled mess.  On second thought, perhaps that was the failing of both him as a director and writer and the script needed revision, as well.   Unfortunately, that didn't happen and there was just too much to make a fully cohesive story.

The Blu-ray is presented in 1080p high definition video with a 2.4:1 aspect ratio.  The colors pop off the screen, especially when the story moves to picturesque Florida. The Dolby Atmos audio accentuates the gunfire and the soundtrack but the mix is off and the guns are too loud and dialogue too soft causing one to constantly adjust the volume.

The extras on the Blu-ray include Angels with Dirty Faces: The Women of Live By Night, The Men of Live By Night, Live By Night's Prolific Author, In Close-up: Creating a Classic Car Chase, Deleted Scenes with Commentary, and Director's Commentary.  For the most part, they are enjoyable and offer some insight into the film and cast but the deleted scenes seemed unnecessary to me.

I was somewhat disappointed in this film, as Affleck is usually synonymous with great story telling, excellent direction, and an emotional connection.  Despite a strong cast, Live By Night just misses the mark for me.