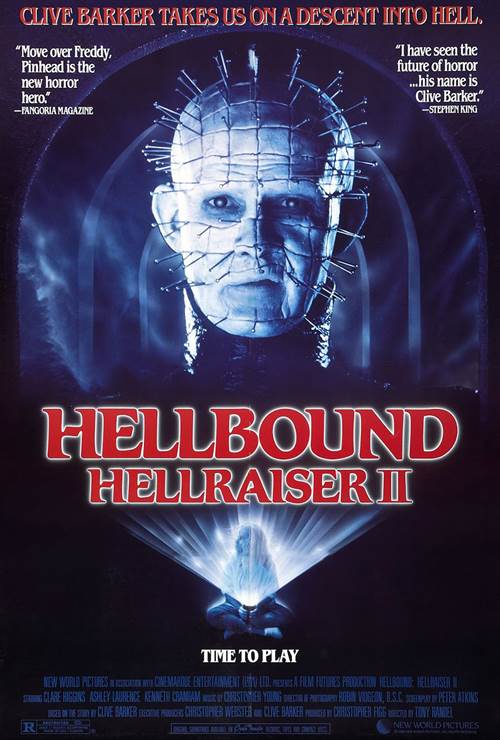 In 1988, it emerged as the shocking follow-up to the film that redefined the face of horror. Two decades later, it remains the most brutally original sequel in horror film history. Clare Higgins, Ashley Laurence and Kenneth Cranham co-star in this hit sequel from executive producer Clive Barker that experiences the flesh like no other. The time to play has come again: Surrender yourself to the infernal labyrinth of HELLBOUND: HELLRAISER II.


Hellraiser Series Coming to HBO  4/28/2020 3:44 PM EST
The classic horror franchise "Hellraiser" is coming to HBO. The network has announced that they will be releasing a new series based on the franchise. "Halloween" director David Gordon Green will be directing the pilot and a few more beginning episodes."Hellraiser" features the iconic character Pinhead, who leads a group of villains called the Cenobites. The franchise has been around for 35 years ...  More>>

Hellraiser to Be Reborn by Spyglass Media Group  5/7/2019 4:54 PM EST
Hellraiser will be getting the reboot treatment by Spyglass Media Group with David S. Goyer producing and writing. Gary Barber, Chairman and Chief Executive Officer of Spyglass, said in his announcement, "Clive and I go back more than 30 years together. For generations, his brilliantly twisted and imaginative Hellraiser haunted the minds of moviegoers with its searing imagery of Pinhead. David is ...  More>> 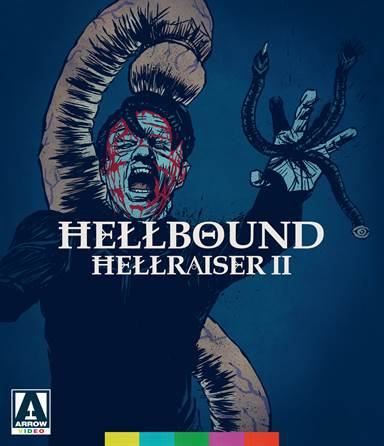 Arrow Home Video has such sights to show you. In case you have been sleeping your way through the last 8 years of Physical Media releases, Arrow continues to hit grand slams and has now decided to knock it out of the park by rereleasing the Hellraiser films, individually, so now is your chance to get in on it.

Upon its initial release, in December of 1988, Hellbound: Hellraiser II, didn't seem, to me anyway, to be a worthy successor to the first film. But in recent years, I have grown fond of this sequel and I really appreciate the efforts they made to expand upon the "Hellraiser" universe. I especially enjoyed how they dove-tailed directly into part 2. Again, not a usual technique in a horror franchise, but one that worked well, here.

Again, for those of you that need it...

Picking up right where Hellraiser left off, Hellbound: Hellraiser II expands upon the terrifying universe created in Clive Barker's original film – taking the story into the very depths of hell itself. Having escaped the clutches of Pinhead and the demonic Cenobites, Kirsty Cotton (Ashley Laurence) awakens to find herself detained at the Channard Institute, a hospital for the mentally ill. But her torments are far from over – the chief doctor at the institute is determined to unleash the powers of Hell to achieve his own twisted ends. "Hellbound: Hellraiser II" is one of the most celebrated horror sequels of all time, offering a vision that is both more gruesome and fantastical than its predecessor.

Like its predecessor, Hellbound: Hellraiser II is an excellent 2K restoration, and provides you with a beautiful, High Definition (1080p) presentation, as well as Lossless DTS-HD MA 5.1 Audio. And, like "Hellraiser", there are a few scenes of graininess, and a noticeable drop in clarity, especially during the darker scenes. Though noticeable, it does nothing to diminish the impact of the sinister aspect, nor the overall quality of the restoration. The audio is also a thing of beauty, the soundtrack is a clarion call to cruelty and the dialog is clear and up front not to mention the screams, the roar of the hellish winds, and rising in a glorious baritone, Pinhead. Doug Bradley shines in the role and truly deserves more credit for carrying the entire mythology. Without him in this role, I dare say "Hellraiser" would not have been the powerhouse of horror, it was.

I have included a full listing of the special features, and they are all excellent and comprehensive, but my favorites are Leviathan: The Story of Hellbound: Hellraiser 2.

I have to say, I own the Scarlet Box, and I absolutely love that set; however, if you are just looking for parts 1 & 2, to add to your collection, I cannot recommend these discs, enough. From the alt-artwork, and reversible covers, tons of special features, and not to mention the quality of the scans, a Hellraiser fan should look no further than these Arrow Video releases.

I could say something about it tearing your soul apart, but will cause such sweet sweet suffering, and we wouldn't want any of that... Would we?!