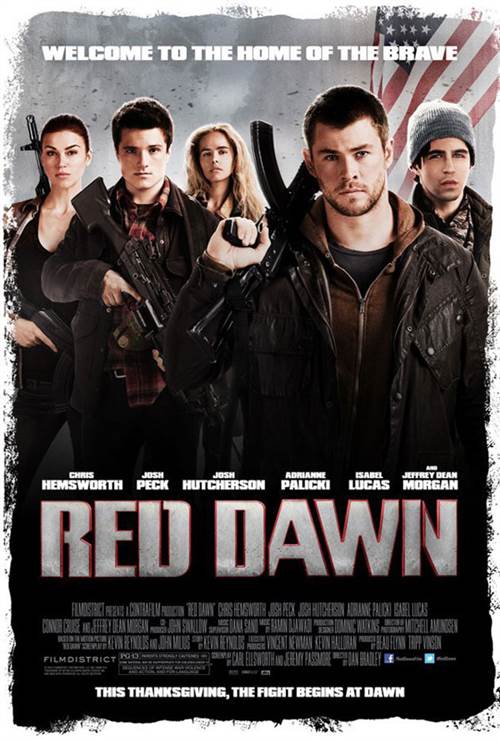 A city in Washington state awakens to the surreal sight of foreign paratroopers dropping from the sky – shockingly, the U.S. has been invaded and their hometown is the initial target. Quickly and without warning, the citizens find themselves prisoners and their town under enemy occupation. Determined to fight back, a group of young patriots seek refuge in the surrounding woods, training and reorganizing themselves into a guerilla group of fighters. Taking inspiration from their high school mascot, they call themselves the Wolverines, banding together to protect one another, liberate their town from its captors, and take back their freedom.

Stream Red Dawn in Digital HD/4K from the AppleTV store. 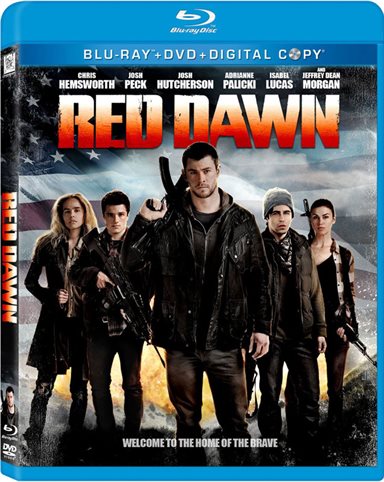 It seemed perpetually delayed and a movie that might never see itself splashed up across cinema screens. The remake of the 1980's red scare Russian invasion Action movie Red Dawn perhaps might have been best left in the can after all. On one hand it's a slick, high-tech, thrilling action film with plenty of fast-moving gun play. On the other it's a shell of the original, a classic "remake in name only" and in many ways a disgrace next to Writer/Director John Millius' original classic. Watch it for its own merits, and it's an enjoyable little romp filled with endless gunfire but little character depth or plot complexities. Compare it to the original and, well, there really is no comparison. Gone is the deeply-rooted sense of family and togetherness from the original, the literal bonds of blood and the figurative bonds of brothers-and-sisters in arms with a common purpose, shared ideals, very real fears, and unmistakable pains, all set against a building anti-war narrative. This new Red Dawn seems to only care about the next time a character gets to fire a gun or make something explode; the dramatic undercurrents feel tacked on with little thought, and it seems even Jed and Matt are brothers only because they were brothers in the original. This new Red Dawn isn't the worst movie ever made, but it does feel rather uncalled-for and in some ways like a missed opportunity to really tell a harrowing tale of survival in the midst of chaos. Instead it's just another run-and-gun nothing of an action movie that hides its gaping hole at substance with loud noises and slick filmmaking techniques.

Jed Eckert (Chris Hemsworth) is a Marine back home in Spokane, Washington, on leave from Iraq. His younger brother Matt (Josh Peck) is quarterback of the high school football team. Though Matt loses the big game, he finds favor from his father Tom (Brett Cullen, who delivers the best scene in the movie) for his courage and leadership on the field. The lights go out that night, and the next morning Jed and Matt awaken to heavy rumbles and the sight of paratroopers dropping from the sky. It doesn't take long for them to have a run-in with a foreign military leader named Captain Cho (Will Yun Lee) before they flee to the mountains, per their father's wishes. Jed and Matt pick up a few stragglers along the way but fail to recover Matt's girlfriend Erica (Isabel Lucas) before she's taken prisoner by the invading North Korean forces. Amongst the survivors is Daryl (Connor Cruise), son of Spokane's mayor (Michael Beach). When the survivors witness the North Korean's brutality firsthand, the Eckert brothers and those under Jed's care find they have no choice but to adopt guerrilla warfare tactics, to "create chaos" and bring the invaders to their knees.

Before even watching the movie -- never mind what it does right or wrong on the screen in terms of action and drama -- and knowing only the hubbub and back story surrounding it, it's easy to see that the Red Dawn remake betrays the original. John Millius' original picture was a take-no-prisoners anti-Hollywood sort that dared to tackle a very dangerous subject and portray America's enemies as America's enemies, unafraid of whatever backlash he might receive for telling the story he wanted to tell, as he wanted to tell it, politics or any sort of criticism be damned. The movie certainly scared a lot of people, rattled more than a few nerves, and was misunderstood by some as a shallow guns-blazing picture with no real depth or purpose beyond the superficial rather than a somewhat deep and heartfelt anti-war picture that slowly takes shape as the movie progresses. It's funny; those criticisms now apply to the remake -- it's a real gung-ho go-get-'em sort -- but the real story here is the new film's change in enemy invaders from the Chinese to the North Koreans after a Chinese newspaper decried the choice of fictional villain, claiming that the film was guilty of "planting hostile seeds against China." The problem is this film's caving to pressure, and besides, it still feels a little far-fetched for North Korea to represent the invading and occupying antagonist.

Indeed, it's a little tough to swallow the "North Korea" pill. This is a country that cannot feed its own people or keep the lights on at night, and the regime certainly doesn't give its people the freedom to provide and produce for themselves. Even with all of its saber-rattling, nuclear tests, and all the money it pours into its military at the expense of its people, a full-blown invasion and occupation of Northwestern America seems a bit preposterous at this stage in the world game. There's a scene in the movie in which North Korean leaders attempt to propagandize and win over a throng of American citizens by promising to restore power and utilities to the city. One can't help but to think of this image and chuckle at the movie's illogic and the scene's irony but also feel a very real sense of sadness for people so oppressed. There's also another scene, far more telling and realistic, in which Jed comments that most of the North Koreans probably don't even want to be in the United States (contextually, on a military occupation mission). Nevertheless, the film opens with a hodgepodge of news segments that are collectively a current events newscast montage about what, politically and militarily, North Korea is and where it is headed, from Kim Jong-il's death to the nation's highly publicized nuclear tests and direct threats against the mainland United States. In that regard, the film feels very much up-to-date and on the cutting edge of the modern geopolitical landscape. But an all-out occupation? Hopefully the movie is and remains a work of far-out fiction rather than some harbinger of things to come.

As for the movie, well, it's enjoyable enough if one watches just to soak in a straightforward action movie with precious little depth. The action comes on thick and rarely relents for more than a few minutes after the opening ten that establishes the North Korean threat and the Eckert family members. Still, sometimes less is more; the original film did it all with a few text blurbs and a snarky comment about the football scoreboard still showing the not-so-kind results from the night before. The new film does away with the original classic's classroom landing scene and instead opts for an admittedly cool moment in which Jed and Matt awaken to the thunder of explosions and the sight of paratroopers dropping into their neighborhood. The picture spends more time with the survivors as they train in the mountains and employ their newfound guerrilla tactics against targets around Spokane than the original film, filling time with more action and less on its characters and emotions. Suffice it to say, the remake keeps some things the same and drastically changes others. The movie is really, really slick, way more polished than the original, but that doesn't mean it's necessarily better.

Red Dawn looks great on Blu-ray. 20th Century Fox's high definition presentation rarely offers anything less than stunning visuals whether bright daylight or dim interiors. Detail is striking. The image is remarkably sharp and crystal clear, revealing film-perfect skin textures, clothing details, and structural city elements both intact and war-torn. Red Dawn storms onto Blu-ray with an incredible reference-quality DTS-HD Master Audio 5.1 soundtrack. This one's all about the action. Gunfire sounds utterly fantastic. It erupts from all over the stage and never settles down. It's heavy, focused, and downright exciting. The thump-thump of automatic weapons fire practically shreds the stage, heavy machine guns tear straight through, and explosions rock the listening area to its core. Every action scene seems to best the last; this is a symphony of gun play that all Action movie fans will want to hear. The track also delivers heavy din and minor ambience with ease. Whether hard hits and chaotic spectator din at the early football game or gentle woodland atmosphere later on, the track proves all-immersive away from the mayhem of war. Music is smooth and accurate with perfect spacing, effortless surround support, and faultless clarity. Of course, dialogue is perfectly delivered. They don't get much more action-packed and sonically satisfying than this. Inexplicably, even for a movie as bad as this, not a single supplement is included. The package does, however, contain a DVD and both iTunes and UV digital copies of the film.

To recap, the new Red Dawn is all polish and no substance, all action and no depth. The gunplay's fast and furious, the explosions come frequently, and the movie's as slick as a new movie can be. On the other hand, it spits in the face of the original in so many ways, and not just by glossing over the deeper thoughtfulness, characterization, and emerging anti-war stance of the original. Fans who grew up with the 1984 film, those who love it to death and get what it's all about will absolutely hate this remake. Casual fans of the original might like it well enough, and newcomers craving some action will find a slick, well-made movie with endless gunfire. 20th Century Fox's Blu-ray release of Red Dawn contains no supplements but it does offer killer video and audio. Rent worthy.