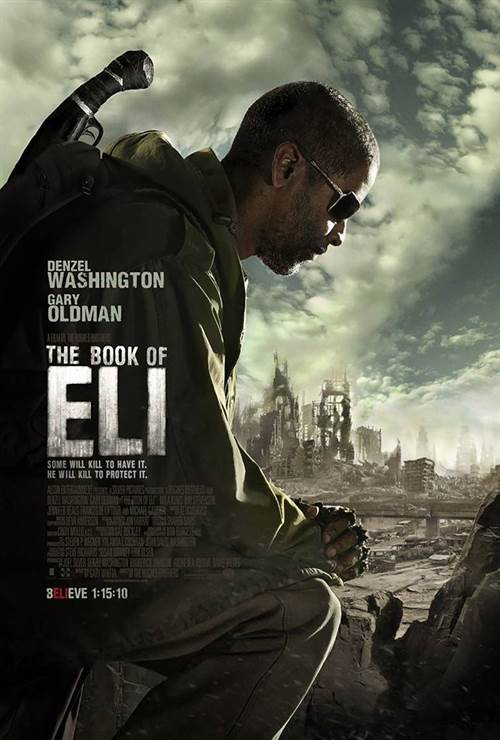 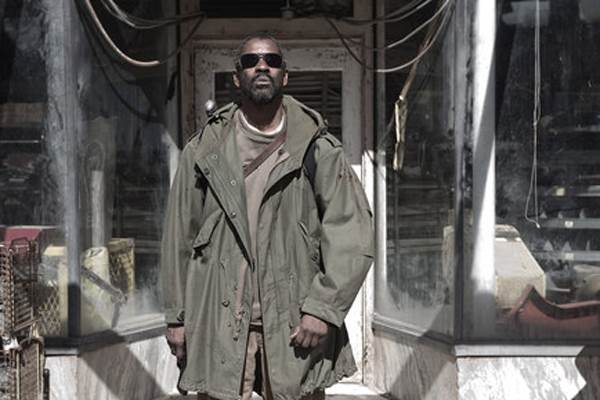 In the not-too-distant future, across the wasteland of what once was America, a lone warrior (Washington) must fight to bring civilization the knowledge that could be the key to its redemption and save the future of humanity.

Stream Book of Eli in Digital HD/4K from the AppleTV store.

Listen to the Book of Eli soundtrack on Apple Music.

Book of Eli images are © Warner Bros.. All Rights Reserved. 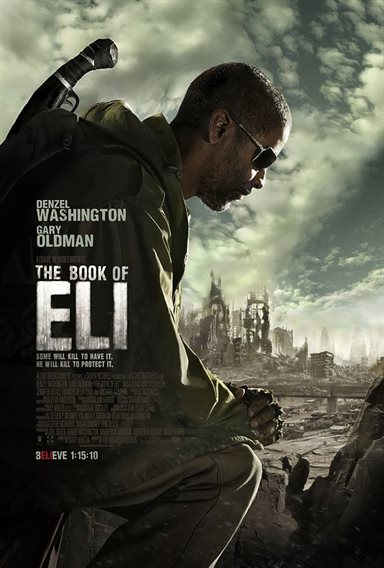 I read The Road and determined from the reviews that the reasonably well made, fairly faithful movie version was simply not at the top of my to-do list. I think it was Slate's headline: 'Prepare to be bludgeoned' that made me go feel that way. When I saw part of the trailer for The Book of Eli that included a sudden Zatiochi-style blade-fight with a silhouette of Denzel Washington killing a whole bunch of people, I instantly thought that it might be the sort of action movie to coax me into a gray-pallet, ash-covered world.

It turns out it was a good call. In The Book of Eli there has been a civilization ending apocalypse, a nuclear war, and Eli walks steadfastly across a blasted landscape with his pack on his back, precious few bullets, a wicked combat knife, and, wrapped carefully in his pack, a thick leather-bound book.

There is a small-town warlord and a murdering/raping motorcycle gang who also happens to be looking for a book. He tells him this book, was destroyed en-mass after the war; some people felt it was responsible for starting the war. Although he has command of a small armed force and one town, he wants it because with the words in the book, he will have the tool to control more and more area. He says, the book is a weapon; and he means to have it.

When Eli enters, the town events transpire to bring the two together with, eventually, explosive results. The action in the movie echoes The Road Warrior (with less fetish gear for costumes ... and more firearms), and Washington, as Eli, plays an ultra-likable absolute killing machine. It is a winning formula which offsets the bleakness of the washed-out color scheme (the war tore a hole in the sky so everyone wears glasses and goggles, the world is ash-gray, people, with the exception of the few leading women, are ugly).

Gary Oldman runs the town with an iron hand and a cadre of loyal followers with heavy weapons. He brings his sense of intensity and innate ability to exude corruption to the role. This is well balanced against Washington's native authenticity and charisma. Mila Kunis plays the female lead as one of the few good looking girls who is originally sent to tempt Eli. A brilliant casting decision puts Tom Waits in as an engineer where his gravelly voice works perfectly.

The Book of Eli doesn't just have religious overtones; it has an overt religious core to it. One of the things that most struck me about it was the occasional sense of joy as it infuses religion as well as the tacit acknowledgement of the power of religious oration. Both of these are absolute givens in the movie, and I found that surprising and refreshing. There is a subtle scene where a character encounters religious words that it is not even certain they can read.

The scene, appearing near the end, is never concretely resolved: did the character understand them or not? It isn't said, but there is a fleeting expression of joy on the character's face that, I think settles it. I found there was a surprising and even powerful moment where the movie shows that it has not just a foundation of faith, but also a comprehension of what religion can mean to people. With just a few seconds of a flash between gun battles, cannibalism, and a convoy of makeshift armored battle vehicles, I found it an unexpectedly welcome mix.

The ending of The Book of Eli may be a bit predictable once all of its cards are on the table (and is probably eyebrow-raising until that point). But after some consideration, I found it satisfying enough and reasonably internally consistent. The movie has a sense of hope that was far more subtle and nuanced in The Road (the book at least), and Washington is the perfect lead to bring it a substantial positive energy. I am even more impressed with his role in reading that he trained with Dan Innosanto in order to do all his own stunts in the combat scenes. He brings a physicality to the role that, when combined with his charisma, is nearly unique.