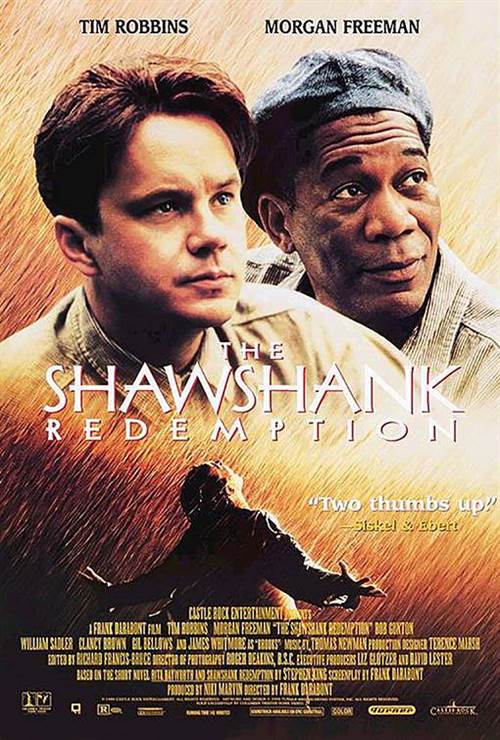 Andy Dufresne (Tim Robbins) is sentenced to two consecutive life terms in prison for the murders of his wife and her lover in the late 1940s. However, only Andy knows that he didn't commit the crimes. Sent to Shawshank Prison to do hard time, Andy--a taciturn banker in the outside world--has to learn to get by in the brutal, cutthroat confines of prison life. His quiet strength slowly earns the respect of his fellow inmates--most notably, Red (Morgan Freeman)--and even much of the prison staff. But Andy's seemingly stoic acceptance of his unjust imprisonment hides a fierce determination for freedom. This beautifully crafted movie features touching and sincere performances from the entire cast, with an uplifting message about humanity's indomitable spirit and the redemptive value of hope.

Stream The Shawshank Redemption in Digital HD/4K from the AppleTV store.

Listen to the The Shawshank Redemption soundtrack on Apple Music.

The Shawshank Redemption images are © Columbia Pictures. All Rights Reserved. 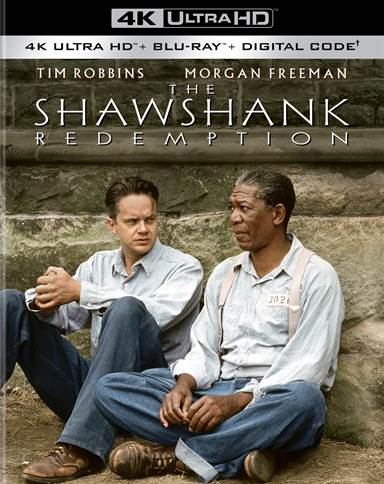 When one hears the name Stephen King, the first thought is horror-themed novels turned into blockbuster movies, but some may not know that he has written other stories without that scary, supernatural slant.  A perfect example of this is his 1982 novella called Rita Hayworth and the Shawshank Redemption.  Twelve years after it was published, The Shawshank Redemption, starring Tim Robbins (Bull Durham) as Andy Dufresne and Morgan Freeman (The Dark Knight) as Ellis Boyd "Red" Redding, was nominated for seven Academy Awards, including Best Picture.  Almost thirty years later, the insightful and symbolic movie has been released in 4K for the first time.

In 1947, Andy Dufresne was a big-time, hotshot banker in Portland, Maine until he was tried and convicted of the double murder of his wife and her lover.  Although he claimed innocence, Andy was sentenced to serve two life sentences in Shawshank Prison.  While there he becomes friends with Red, who is also in for murder.

When a new warden (Bob Gunton; 24), Samuel Norton, takes over, Andy is reassigned to help in the library, although he spends much of his time helping the prison staff in financial matters.  He also becomes Norton's personal bookkeeper and Andy quickly realizes Norton is taking bribes.  After twenty years, Andy executes a daring escape, taking Norton's ill-gotten funds with him to Mexico.  Learning from Andy, Red finally tells the truth when his next parole hearing comes up and he suddenly finds himself back in the real world.  Unable to adjust to freedom, Red remembers the postcard Andy sent him and heads to Mexico to join Andy.

The entire cast of this movie is terrific with Robbins and Freeman leading the way.  They had a natural bond making their friendship believable and both men were transformed into their characters for the over two-hour running time.  Director Frank Darabont (The Green Mile) offers some interesting camera shots and a dreariness that permeates the movie even when the sun is shining.  His pacing is excellent, which is a good thing since the movie is so long, yet time feels like it flies by because the viewer is completely engrossed in the story.

The film is definitely better because of the 4K upgrade. Details, like the prisoner/guard uniforms and the rain pouring down during Andy's escape, show fine stitching and incredible clarity of the droplets.  Even though the color palette is intentionally muted, hues are deep and true and the brief bursts of color jump off the screen.

The DTS-HD Master Audio 5.1 is a little disappointing as it probably would have been worthwhile to transfer it over to Dolby Atmos to match the superior video quality.  However, the audio is still rich with ambient noise vibrating all around the room.  While the audio is very similar to the 2008 Blu-ray review, there are subtle differences to enjoy.

The extras don't offer anything new, besides Director's commentary on both the Blu-ray and the 4K discs.  All the others are the same ones from the 2008 Blu-ray release.  They include Audio Commentary by Director Frank Darabont, Hope Springs Eternal: A Look Back at The Shawshank Redemption, Shawshank: The Redeeming Feature, The Sharktank Redemption, The Charlie Rose Show with Frank Darabont, Tim Robbins, and Morgan Freeman, Shawshank Stills, and Theatrical Re-release Trailer.  Since both actors are still alive, it would have been nice to see something new from them regarding their memories, thoughts, and feelings of the film.

Regardless of whether you plan to overwatch the movie or simply want to enjoy a newer Hollywood classic, it would not be a waste of money to own this movie, especially with the most upgraded technology around.