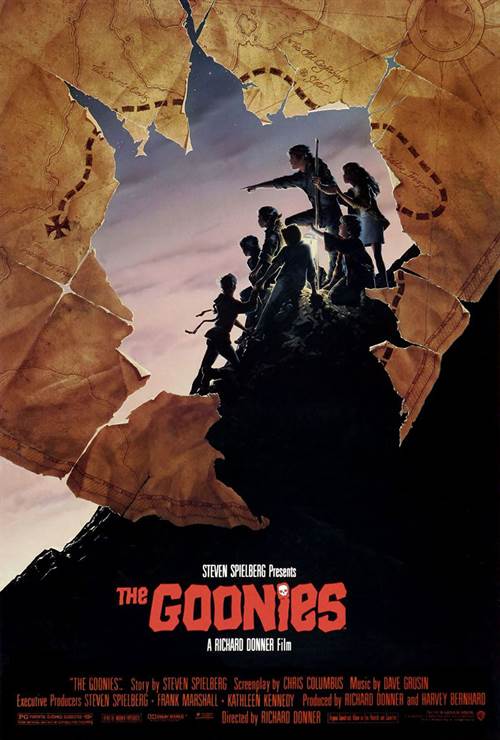 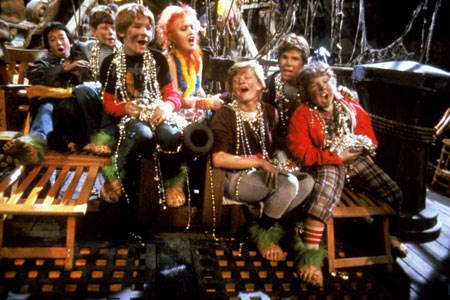 Mikey and Brandon Walsh are two brothers whose family is preparing to move due to a new development that is sure to be started unless enough money is raised, which is quite doubtful. But, when Mikey stumbles on a treasure map of the famed "One-Eyed" Willy's hidden fortune, he, his brother, and a few friends set out on a quest to find the riches in hopes to save their homes. The entrance to a cavern is found, but it is located underneath the house of the Fratelli family, a treacherous group of thieves who attempt to beat the "Goonies" to the treasure.

Stream Goonies in Digital HD/4K from the AppleTV store.

Listen to the Goonies soundtrack on Apple Music. 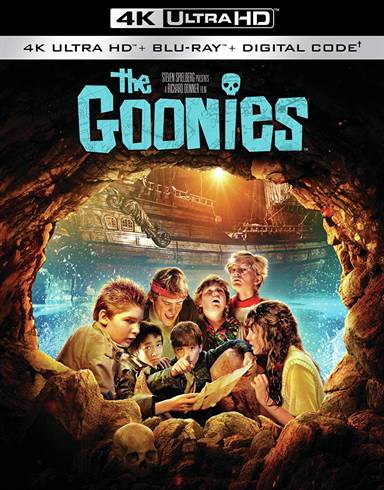 The Goonies never say die!  What, might you ask, is a Goonie?  According to the Urban Dictionary, it is a person who is likable but also an oddball outcast, nerd, dork, and/or weirdo.  For millions of us, who were teenagers in 1985, it is the tale of a group of friends who follow a treasure map and go looking for a pirate ship, which is supposedly full of riches, all in an effort to save their homes from being torn down.  Written by Chris Columbus (Gremlins) and Steven Spielberg (Close Encounters of the Third Kind) and directed by Richard Donner (Lethal Weapon), The Goonies is a film about adventure, friendship, and family.

Mikey Walsh (Sean Astin; The Lord of the Rings Trilogy) and his friends, Data (Ke Huy Quan; Indiana Jones and the Temple of Doom), Mouth (Corey Feldman; Stand By Me), and Chunk (Jeff Cohen; Amazing Stories) live in the Goon Docks area of Astoria, Oregon.  Unfortunately, their homes are about to be foreclosed on to make way for a country club expansion so they are spending their last week together.  When they happen to find a doubloon from 1632 and a treasure map, Mikey thinks they belonged to a pirate named One-Eyed Willy, who supposedly left his treasure hidden nearby.

Believing the map to be real, Mikey persuades the others to follow it with him.  The map leads them to an abandoned restaurant but while they are investigating, a car shows up and the Fratelli crime family emerges with a dead body.  Caught by the family, the boys run to escape and end up finding the secret entrance to the treasure map.  As they venture deeper and deeper, they have to avoid a series of booby traps until they make it to the end of the tunnels, and "X marks the spot".  But was the map real or just one big hoax?

This cast, while young, are all very strong and they have great, natural chemistry.  Astin shows promise while Quan displays great comedic timing. Feldman went on to star in a number of feature films and had a long career as a child actor while Cohen plays his role well.  The supporting cast, including a young Josh Brolin (Avengers: Endgame), helps to lift up this group of fledgling actors.  Donner manages to evoke some strong performances from this cast, despite their age, to create an enjoyable film.

While the film's color palette is mostly muted tones (the sky is overcast, the tunnels are dark), the 2160p resolution offers excellent clarity and strong visuals.  Details are fairly sharp which makes the viewing experience even more enjoyable than it was in theaters, thirty-five years ago.  Surprisingly, the audio has been downgraded to DTS-HD master audio 5.1 from the Dolby True HD 5.1 that was present on the 25th-anniversary release.  The extras were all previously released and includes: Cast Audio Commentary, Hidden Treasures Pop-Up Track, "The Making of The Goonies" Vintage Featurette, Deleted Scenes, Cyndi Lauper Music Video - "The Goonies R Good Enough", and the Theatrical Trailer.

The Goonies may have been released three and a half decades ago but it stands the test of time.  I would happily show this film to my teenagers and I would like to think they would enjoy it as much as I did when I was a teenager.  The story is unique and fun and it's terrific to see young people taking matters into their own hands and, in the end, saving the day.

Spielberg and Columbus wrote a wonderful script and Donner handled it, along with his cast, carefully to create a product that is worth viewing over and over again with the entire family.