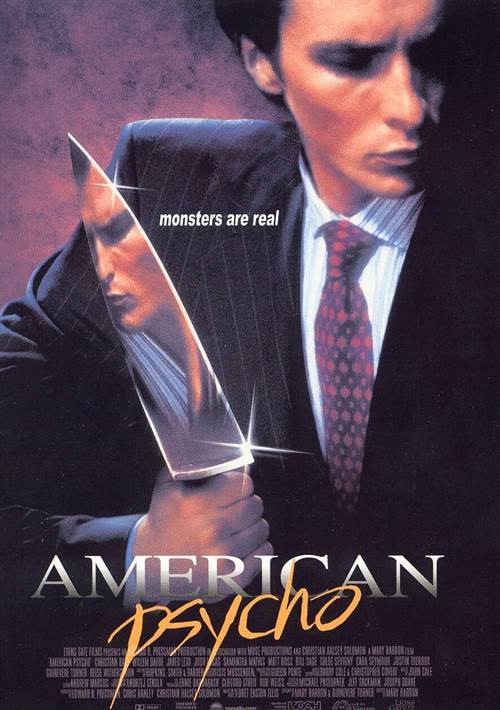 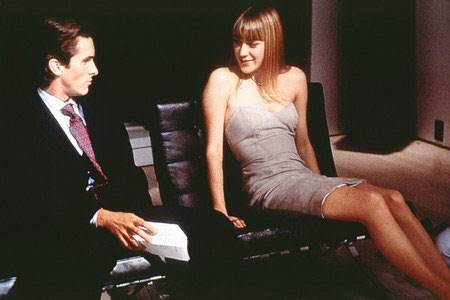 Patrick Bateman (Christian Bale) is a Wall Street yuppie, obsessed with success, status and style, with a stunning fiancee (Reese Witherspoon). He is also a psychotic killer who rapes, murders and dismembers both strangers and acquaintances without provocation or purpose. Based on the controversial novel, the film offers a sharp satire to the dark side of yuppie culture in the '80s, while setting forth a vision that is both terrifying and chilling.

Download American Psycho in Digital HD/4K from the iTunes store. 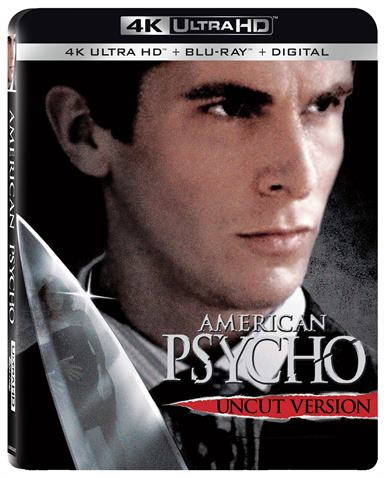 In 1991 Bret Easton Ellis brought us his novel about a Wall Street serial killer called American Psycho.  It was not without controversy and many retailers refused to stock it in their stores.   It is disturbing while mildly satirical as it mocks both the gluttony of the 1980's Wall Street and the depravity of a sick, murderous mind.  In 2000 it became a feature film starring Christian Bale (The Dark Knight) and again was released with more than a little controversy.  Almost twenty years later a 4K unrated version is making its way to stores, much to the delight of fans.

As the film opens we meet Patrick Dempsey (Bale) a narcissistic, investment banker "yuppie" who describes his morning beauty regiment in such detail that one would think they were watching a supermodel.  Patrick is typical of the ‘80's greedy and gluttonous masses with one exception… he is a serial killer.  He feels nothing except the lustful yearnings of hacking up other people regardless of whether or not he knows them personally.  He enjoys inflicting pain – a secret his fiancé Evelyn (Reese Witherspoon; Walk the line) doesn't know.  At first, he goes about his everyday life as a normal cocky bastard flaunting his money around.  However, at night he hunts for victims.

As his blood thirst grows he can no longer contain his need branching out in the daytime and taking more and more risks.  Based on this description one would think this the plot for a horror movie but it is more of a dark comedy with several tongue-in-cheek moments and numerous commentaries on any number of 1980's pop hits.  The violence, however, is plentiful and gory making it a movie that I would not recommend to the faint of heart.

It does, however, showcase a terrific cast beginning with Bale.  As a relatively unknown actor at the time, the project was a risk, which was turned down by more established individuals who were afraid it would hurt their reputations.  Their loss was Bale's gain as his performance was nuanced and layered.  Witherspoon was also excellent and Willem Dafoe (Spider-Man) impressed as well.  Rounding out the cast were Josh Lucas (Sweet Home Alabama), Jared Leto (Suicide Squad), and Justin Theroux (Mulholland Drive) and Choe Sevigny (Big Love).  All in all a veritable who's who of heavy hitters in Hollywood these days.

American Psycho is presented in 2160p high definition video with a 2.35:1 aspect ratio.  Although an older film (relatively speaking) the clarity and definition on the 4K version is excellent.  Details are sharp; colors are warm where necessary and stark when called for such as the clean, sterile environment of Patrick's apartment.  The Dolby Atmos audio does a great job of showcasing the eclectic soundtrack and highlights the dialog.  The extras include three different Audio Commentaries (which seems like a little bit of overkill – pun intended), Deleted Scenes, The '80s: Downtown, and American Psycho: From Book to Screen.  The last two are over an hour long but well worth watching as they give some great insights into the era and the film itself.

While American Psycho starts off being intriguing it loses focus along the way and the end leaves the audience wondering what was that all about?  The final few scenes kind of "go off the rails" which, for me is what downgrades this movie from a solid A content-wise to a B instead.  As mentioned earlier, the film has a terrific cast and a great soundtrack (if you were a kid of the ‘80's) but some may be turned off by the blood and gore.  As a cult classic though there is much commentary about the film including if it was all a dream or hallucinations, which adds an interesting angle to the movie as one watches it.

This is one film that isn't going away anytime soon and shouldn't for a number of reasons so I recommend picking it up today!