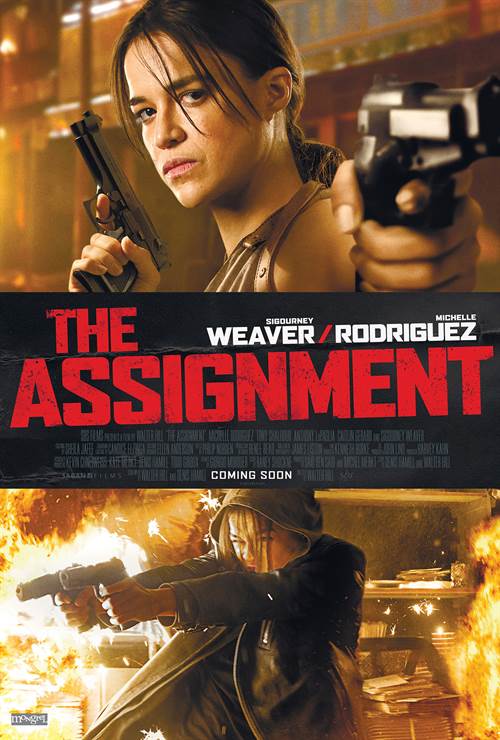 Legendary director Walter Hill gives the revenge film a modern neo-noir twist with this electrifying thriller. Hit man Frank Kitchen (Rodriguez) is given a lethal assignment, but after being double-crossed, he discovers he’s not the man he thought he was — he’s been surgically altered and now has the body of a woman. Seeking vengeance, Frank heads for a showdown with the person who transformed him, Dr. Rachel Kay (Weaver), a brilliant surgeon with a chilling agenda of her own.

Stream The Assignment in Digital HD/4K from the AppleTV store.

The Assignment images are © Lionsgate. All Rights Reserved. 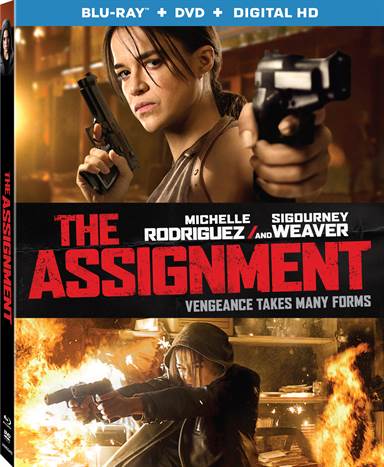 Walter Hill (Last Man Standing) is known as a world renowned Producer and Director. From Alien and Red Heat to 48 Hrs. and Bullet to the Head, he has a style of movie making that tends towards violence and blood. He has also written a number of films including the aforementioned, The Warriors and Streets of Fire. His latest project, The Assignment, is once again bloody, violent and trends towards the unusual.

The old saying "Karma is a Bitch" is very true, so you should always be careful about who you piss off. Unfortunately for Frank Kitchen (Michelle Rodriguez; The Fast and The Furious), he missed that lesson in school. A professional hitman he always gets his target and doesn't care who gets hurt as long as the money is good. However, when he kills the wrong guy he pays the price in a unique way.

Dr. Rachel Jane (Sigourney Weaver; Aliens) is a brilliant surgeon but arrogant and narcissistic. She belittles everyone around her and seems unconcerned with the consequences of her actions. When she loses her medical license, she goes rogue performing plastic surgeries and gender reassignment surgeries illegally. With a reputation for being inexpensive (relatively speaking) and excellent, she is well known in underground circles for her work.

Unfortunately, Dr. Jane's brother owes the mob a lot of money and when they get tired of waiting they send in their best guy - Frank Kitchen - to kill him. This outcome leads the doctor to take revenge into her own medically talented hands and performs surgery on Frank without his consent. This, of course, doesn't sit well with Frank, who goes out on a quest for vengeance not only to get Dr. Jane but all those who helped her. Did I mention "Karma's a bitch"?

The script is well written and the plot is unique and sort of intriguing. However, there are too many components to this complicated plot and some of the execution isn't well thought out. It seems implausible that someone would walk around so easily soon after major surgery and even opt to live in a way they didn't choose, but I guess revenge is a strong motivator.

Weaver is masterful as the conceited and somewhat maniacal doctor. Her delivery is methodical and deliberate, which gives the audience the feel for what the good doctor was like before she lost her license and was incarcerated. Rodriguez looks strange as a man but does her best to use the lower register of her vocal chords to seem more masculine. Tony Shahloub (Monk) plays off Weaver nicely as the psychiatrist, evaluating her mental stability.

The 1080p high definition video is solid with a range of hues that encompass many variations. The red of the blood seen throughout is a mixture of deeper tones mixed with brighter tinges. The DTS-HD Master Audio 5.1 is clear with the dialogue represented through the center channels and the sound effects (mostly gunshots) well represented across the board. The disc offers no extras other than the theatrical trailer and a photo gallery, which is disappointing. Interviews with the cast, especially Rodriguez, might have given some interesting insight.

While a unique and interesting concept, the end product feels, unfortunately, unfulfilling. I wanted to know more about the characters and their psychological experiences. The whole thing ends up being a little too superficial when it had the potential to be so much more.

Fascinating as it is, The Assignment falls a little short in the end.