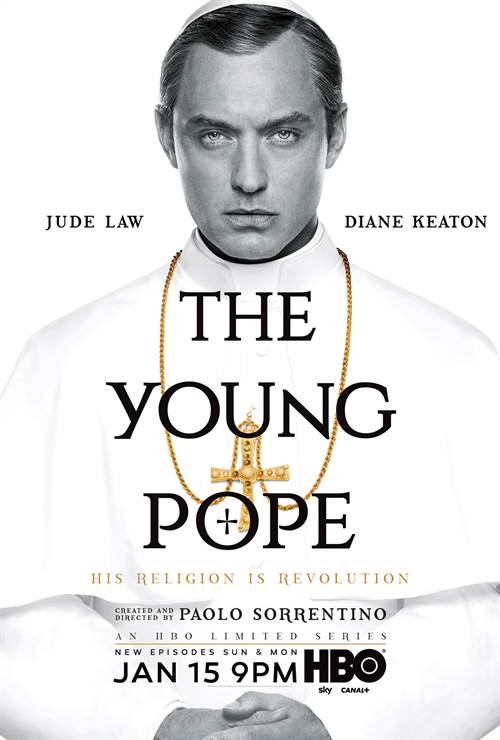 Lenny Belardo, a.k.a. Pope Pius XIII, is the first American pope and the youngest ever elected by the College of Cardinals. Two-time Oscar(R)-nominee Jude Law stars in this 10-episode limited series about this radical new Pope who eschews the counsel of Vatican elders, enlists the woman who raised him (Oscar(R)-winner Diane Keaton) to be his chief confidante and announces a series of hardline initiatives that confound the Vatican status quo. Over the course of the season, flashbacks and revelations paint a complicated portrait of Lenny whose strict adherence to Catholic dogma is belied by flights of fancy and crises of faith--not to mention an unusual and possibly inappropriate relationship with the wife of a Swiss Guard officer.

Download The Young Pope in Digital HD/4K from the iTunes store.

The Young Pope images are © HBO. All Rights Reserved. 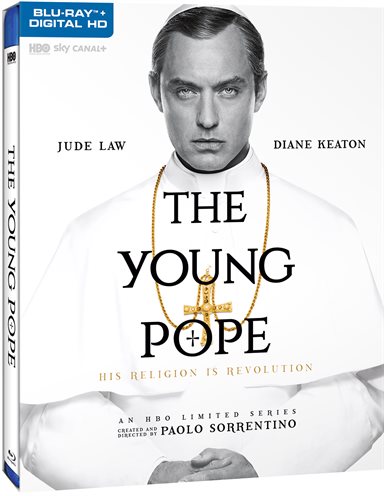 If you enjoy Dan Brown's books, Tom Hanks in his movies, or any intrigue and conspiracy theories about the Church, Vatican, and the Pope, then HBO's The Young Pope is the show to watch.  This new show doesn't have the action scenes that Games of Thrones has or the suspense factor of Westworld, but it has a young pope who is out to screw the Cardinals of the Catholic Church.

Young Pope Pius XIII, also known as Lenny Belardo (Jude Law; King Arthur: Legend of the Sword) was an orphan in America and made his way up the Church's political hierarchy and is the newly elected Pope.  He is the first American Pope, is younger than most, more conservative than most, and it appears was a surprise win at the Conclave.  You don't find out during Season 1 exactly what happened to land him the Papacy, but it's soon clear from the Vatican's Secretary of State, Cardinal Voiello (Silvio Orlando; The Passion), that Lenny's Papacy was a compromise - and one that the Cardinals thought they could control.  It's clear that this Pope is not one to be questioned and certainly not one to be played the fool.  Throughout the first season, the Holy Father struggles with his identity as an orphan, often dreaming of his unknown parents, which seems to be a root for his unnerving distrust of most people surrounding him, as well as what he describes himself capable of in one of his first on-screen confessions – vengeance.

Jude Law plays Lenny Belardo/Pope Pius XIII and brings to the role such captivation of identity that one cannot imagine.  He is vengeful and devious, kind and reverent, a child and an adult, all at the same time.  From one scene to the next, you never know what this Young Pope will do, what he will say, what he will decree.   Law is a powerful actor and shows his dynamic range of absorbing himself into this character like we have never seen before of Law.  His face throughout the season stays fixed when dealing with the Cardinals and the political factors- a fixed face, meaning he is stoic, strong, uncompromising- not what we would expect to see from a loving, Holy Father.  Law is exactly the opposite and one wonder's what game he is playing in his role of Pope, on screen.

Jude Law's speeches throughout the series are gravitating.  They are unlike what anyone would expect a Pope to say, but exactly what one would believe a Pope would think.  The fact that the thoughts that pop into Pope "Lenny's" head, come out of his mouth is almost maniacal and stunning at the same time.

Silvio Orlando plays the conniving political Cardinal Vioello- the Cardinal with the real power in Vatican City.  Not used to being thwarted or being treated as anything but the Pope's puppet master, Orlando's character soon realizes- within the first half of the first episode- that this Pope is different.  Orlando shows the depth of his character as a devious political figure and it seems as if the Season is only about the political religious competition between the Pope and the Secretary of State, although halfway through the season, the political atmosphere changes- for a minute.  My only issue with Orlando's performance is that his Italian accent is very strong when speaking his English lines and I felt I was straining to understand some of his lines.

Diane Keaton (The Godfather franchise) plays Sister Mary, the nun who raised Lenny after his parents abandoned him.  The Pope brings her to the Vatican to be his "right-hand man", to the displeasure of Cardinal Vioello, and soon it is clear that the political war in Vatican City will include Sister Mary.  Keaton's character is a strong woman and there is much to learn about her background. She is an enigma in the show.   While she clearly feels she has the hand in making the Pope, as she raised Lenny, it is clear that Lenny understands that he must establish that he alone is the Pope and that despite the devotion of Sister Mary, the Papacy is not a "we" but an "I".

The Young Pope is a must see from the beginning of the first episode.  It starts off with a huge wow factor that causes one's mouth to drop in utter fascination.  While the season takes the wow factor down several notches each episode, the fascination remains, mostly because of Law's performance.  Law keeps you guessing as to what kind of Pope he will be and what kind of man he really is.

The Blu-ray is presented in 1080p with an aspect ratio of 1.78:1.   As usual, HBO provides their viewers with superb cinematic quality.  The scenes inside the Vatican are presented in neutral, warm tones, consistent with the actual feeling of being inside Vatican City and St. Peter's Basilica, from one who has actually been there.  Outdoor scenes are often bathed in sunlight with the colors bright and rich, providing a natural feeling.  The details on the costumes of the Pope and Cardinals are crisp and clear and shown in deep splendor as we are used to seeing in HBO's series.

The audio is presented in DTS-HD Master Audio 5.1 track that is consistent in volume, both in dialogue and background music.  While the church chorales that are presented throughout the series to supply background "noise" while the Pope is thinking or changing wardrobe is what we hear, the focus is still on the actor.

Bonus features are on all three Blu-ray discs and consist of the following:


Law states as Pope "I intend to start a revolution" and HBO has done exactly that.  The Young Pope is a unique, stunning series that with proper marketing has the potential to be the next Game of Thrones of HBO.  I wouldn't mind a Jude Law version of the Pope doll - especially if it came in the almost see through white Pontiff outfit Law wears throughout the series.