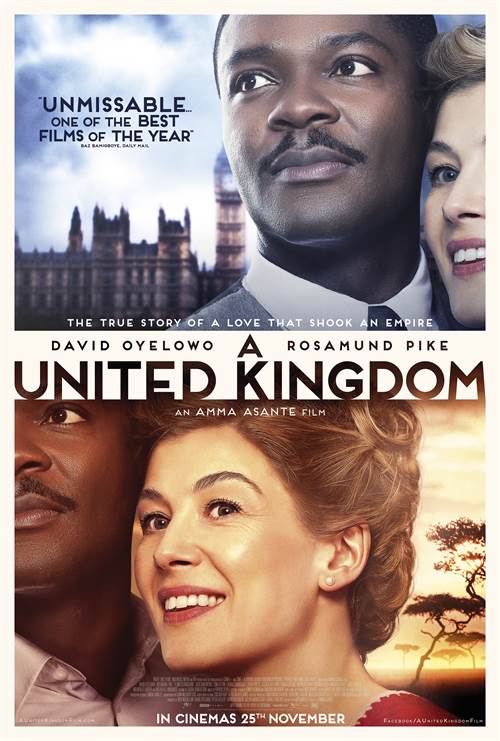 David Oyelowo (Selma) and Rosamund Pike (Gone Girl) star in this inspiring true story of the forbidden love between the king of Botswana and a white English woman in the 1940s. When they decided to marry just as apartheid was being introduced into South Africa, it caused an international uproar. But their passionate romance triumphed over every obstacle and changed the course of African history.

Stream A United Kingdom in Digital HD/4K from the AppleTV store. 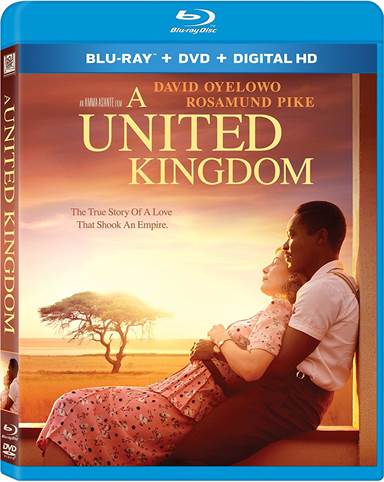 "True love knows no bounds." It's a statement we hear often in the face of adversity when two people are supposedly "meant to be together".  They face insurmountable odds that have to be conquered in order to live "happily ever after". Usually, these type of stories are the relegated to the world of fantasy but every so often we glimpse some version in real life.  This is certainly true of the romance between Seretse Khama (David Oyelowo; Selma) and Ruth Williams (Rosamund Pike; Gone Girl); him the heir to a throne, her a common British woman.  Their love would triumph over those who chose to tear them down and inspire a nation along the way.

Seretse was the heir to the throne of Bechuanaland (current day Botswana).  After his parents died when he was 3 years old, his Uncle Tshekedi (Vusi Kunene; Eye in the Sky) became regent, governing until Seretse was old enough to lead his people.  Tshekedi sent Seretse to Great Britain for his formal schooling which is where he met Ruth. When the two fell in love and ultimately married the odds were stacked against them and they found everyone was against them, including their families.

The year was 1947 and Seretse and Ruth met at a church dance.  After a year, they decided to marry causing an uproar, not only because he was an African Chief but because while he was black, she was white.  Apartheid was taking hold in much of South Africa and, while the British Government was a Protectorate of Bechuanaland, they opposed Seretse's leadership and his marriage. The union also caused a rift within Seretse's family, with his Uncle opposing him and declaring that Seretse was unfit to be King.  Summoning him back to England, the British government exiled him causing him to be separated from Ruth. Eventually, Serertse was able to return and declared Botswana a Democratic state.  He was elected as their first President in 1966.

From the moment this film began, I found myself engrossed in the story.  The characters were immensely likable and their plight intriguing.  Oyelowo and Pike were perfectly cast as the couple which helps bring their story alive.  Their chemistry is evident, making their love story believable and their personalities are suited to these roles.  Oyelowo masters Seretse's calm and gentle demeanor, while Pike manifests a noble defiance infused with an unsure fear.  They both exude an inner strength necessary to fight their oppression.

Director Amma Asante (Belle) has the daunting task of capturing the love affair between Ruth and Seretse on screen and she manages to pull it off beautifully.  Even through the phone, we can sense the deep rooted love these two individuals share.  The project was also lucky enough to shoot in Botswana so the vistas are captivating and give the film a sense of realism.  Especially nice is that they were able to film in the actual house Mr. and Mrs. Khama shared when they lived there.

The 1080p high definition video is fantastic in this case, especially when we see wide shots of the African desert and while the color scheme is dusty and dreary for the most part, the picture is clear and crisp.  The DTS-HD Master Audio 7.1 is sharp with the dialogue coming across through the center channels nicely.  The ambiance, especially in Africa, sits nicely on the surround speakers and does not overpower the words.

The Blu-ray has five extras and most a truly special.  They include: Making of feature, Filming in Botswana, The Legacy of Seretse and Ruth, Theatrical trailer and the London Film Festival opening night Gala premier.

I wasn't sure what to expect from this movie and I am happy to say I was pleasantly surprised.  The film is engaging, the characters interesting and, overall, it's an enjoyable story, though the British government's treatment of Seretse and Ruth for their self-serving reasons made me sad and angry.  Despite that, I recommend A United Kingdom for anyone who enjoys a good drama/ love story.