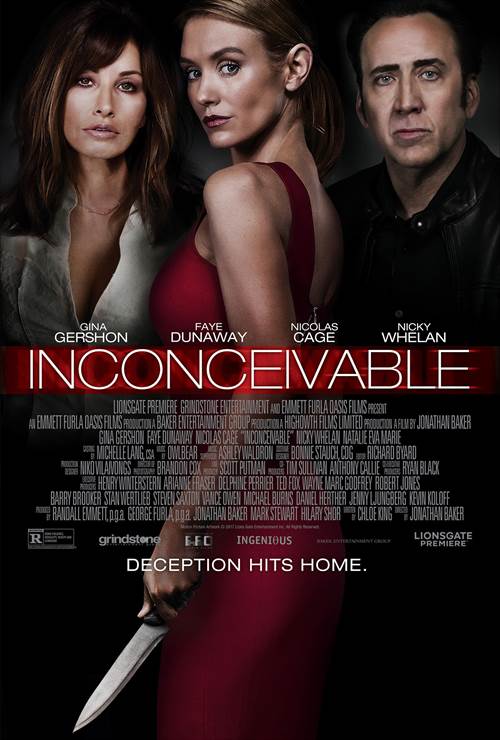 This gripping tale of blood ties and dark passions reunites stars Nicolas Cage and Gina Gershon for the first time since FACE/OFF. Hoping to return to work as a doctor, Angela (Gershon) befriends young mother Katie (Nicky Whelan) and asks her to serve as a live-in nanny. But Angela and her husband, Brian (Cage), have no idea about Katie’s horrific past, and Brian’s mother (Faye Dunaway) grows suspicious. When infertile Angela asks Katie to become a surrogate mother, Katie’s ulterior motives begin to surface, and Angela quickly realizes that things are not what they seem.

Stream Inconceivable in Digital HD/4K from the AppleTV store. 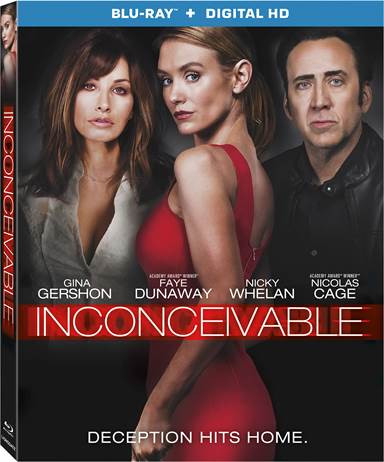 There are always "nanny horror stories" in the news.  Babysitters who abuse their charges, steal things, etc. and in 1992 movies took it to another level with the story of a nanny our for revenge in The Hand That Rocks the Cradle starring Rebecca De Mornay (Risky Business).  Twenty-five years later we have another tale of the crazy nanny in Jonathan Baker's feature film directorial debut Inconceivable. Although this story doesn't base itself on revenge, it has a twist that one would have seen coming from the opening sequence.

Katie (Nicky Whelan; Hall Pass) is a single mom hiding/running from her abusive ex-husband…or so she says.  As she once again moves into a new area she starts dating Mommy and Me instructor Linda (Natalie Eva Marie; WWE Raw) who introduces Katie to another mom, Angela (Gina Gershon; Face/Off).  Angela is a successful doctor who underwent Invitro fertilization with a donor egg to have her daughter.  As she and her husband Brian (Nicholas Cage; National Treasure) befriend Katie, and their daughters become friends, Katie suddenly announces she is leaving again.  Brian and Angela instead hire Katie, first to paint a mural in their daughter's room then to be their nanny, as Angela goes back to work part time.

All seems to be well but when Linda is suddenly killed in a "boating accident" Katie steps in to be the surrogate for Angela and Brian so they can have another child via the same egg donor. Everything is perfectly in place with Katie and her daughter living in Brian and Angela's guest house until Angela notices things seem to be "off".  Katie refers to the unborn child as her baby and tells her daughter and Angela's daughter that they are sisters.  As Angela digs deeper, she is unprepared for the horror she is uncovering.  Meanwhile, Katie suspects Angela is finding out the truth and devises a plan to sabotage Angela and her marriage.

While Cage is certainly a draw, he is really just a supporting actor with the women taking on the lead roles.  He plays his part well but Whelan and Gershon are the ones to watch.  Whelan is especially good as the conniving, disturbed woman who takes extra special care of Angela's daughter.  She has such a sweet face and demeanor that you wouldn't suspect the evil that lies beneath the surface.  At moments, she reminds me of a younger Nicole Kidman (considering they are both Australian it isn't too much of a stretch).  Gershon, however, is a little more uneven in her performance. At times she does really well and at others, her delivery seems somewhat wooden which is hard to watch.  Playing Brian's critical and suspicious mother is legend Faye Dunaway (Mommie Dearest) who does a very good job as well.

The technical specifications for the Blu-ray release are the traditional 1080p high definition with a 2.40:1 aspect ratio and DTS-HD Master Audio 5.1.  The visuals are clean with a full spectrum across the color palette and the scenes are shot beautifully.  The sound is also well done with a good blend of sound effects and dialogue.  Neither overpowers the other in any way.  The disc only comes with a few extras but they are robust.  Besides the director's commentary, there is a behind the scenes feature, deleted scenes trailer gallery and cast/crew interviews that run for over an hour and provide some interesting tidbits.

Inconceivable is an interesting enough idea but lacks the punch and suspense that The Hand That Rocks the Cradle did.  It is simply a reminder that women who use surrogates and donor eggs to have their children sometimes have a rough road and should be used to start a dialogue about these reproductive issues.  It is also a warning that there are some very disturbed people in the world.