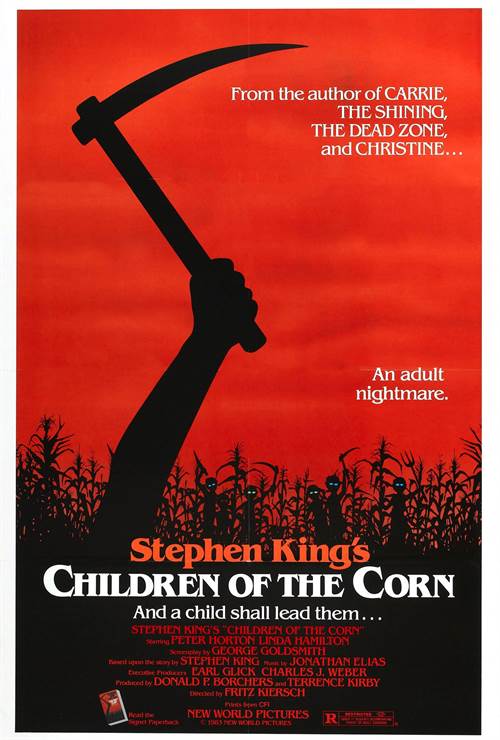 A young couple (Linda Hamilton, Terminator 2, and Peter Horton, thirtysomething) find themselves stranded in the rural town of Gatlin, Neb., where they encounter a mysterious religious sect of children. But nowhere in town are there any adults. The horror grows to a blood-curdling climax as the two new visitors learn the horrifying secret behind the prospering corn fields. Based on the classic short story by Stephen King, CHILDREN OF THE CORN is a longtime horror favorite that has spawned six sequels and many imitations. See how it all started.

Purchase DVD/Blu-ray/4K UHD physical copy of Children of The Corn today at Amazon.com

Download Children of The Corn in Digital HD/4K from the iTunes store.

Children of The Corn images are © New World Pictures. All Rights Reserved.

Children of The Corn Blu-ray Review 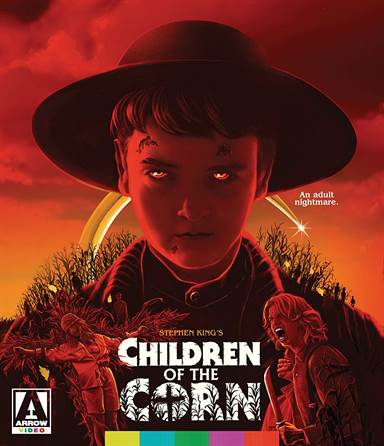 OUTLANDER! Get ready, Arrow Video has released a 2K restoration of the 1984 classic, and I guarantee you will need plenty of Popcorn.

Even in 1984, Stephen King's name had carte blanche with horror fans, by 1984 Carrie, The Shining, Cujo, The Dead Zone and Christine had been released, theatrically and despite Children's  modest budget, and obvious shortcomings, this movie continues to have a strong Cult following. At the time of its release, no one could have predicted it would become a hit, earning over $15 million (on an 800K budget) at the box office and spawning 7 sequels. I wouldn't rank this movie with the likes of Friday the 13th, Nightmare on Elm St, or Hellraiser, but it does have a certain naïve charm about it that continues to draw fans. For those that need to know:

A young couple traveling cross-country find themselves stranded in the small town of Gatlin, where they meet a mysterious religious cult of children. With no adults in sight, the terror brews as the new arrivals find the secrets of the prospering corn fields and the children who inhabit them.

Led by the mysterious Isaac and the unhinged Malachi the blood-curdling secrets of the children of Gatlin are soon revealed to their new ‘outlander' guests.

Children of the Corn directed by Fritz Kiersch does suffer from a few problems, many of which are budgetary; however, poor visual F/X and lack of visceral, edge of your seat tension and atmosphere are the biggest problems here. The movie isn't as scary as it could have been. One of the obvious issues is most of the film is shot in broad daylight and it takes the piss out o, what could have been an extremely creepy setting.  Empty and forlorn cornfields, whose rows extend miles in every direction, creating a sea of whispering isolation. A seemingly, deserted town filled with pint-sized religious zealots, hell-bent on murdering anyone over the age of 19, and all of the Children are led by a creepy-as-Hell, Man-child, known as Isaac (John Franklin). It should have been a perfect place to begin a horror story

The children of Gatlin could have been used to greater effect, especially as a vicious pack of feral kids, stalking our protagonists, it would have added a great deal more of tension for Vicky (Linda Hamilton; Terminator 2) and Burt (Peter Horton; Shepherd) if Malachai (Courtney Gaines; Back To The Future) and his crew were giving chase through the cornfields, under cover of a stormy night.

Complaints aside, it has a strong cult following and after watching it again, I can see why. The film begins with the Human sacrifice of all of the adults in Gatlin. Under the direction of Isaac, the children are twisted zealots and eventually, we discover they have lived without parents, under the thrall of a demon "He who walks behind the rows", which is pulling all the strings. Ultimately, its Burt and Vicky that help destroy the demon and escape with Job and Sarah, the only two children unaffected by the evil in the town, the four of them barely escape with their lives. The tale, fortunately, didn't end there.

Now, 33 years later, Arrow Video presents us with an excellent 2K scan of the original negative, and 1080p 1.78:1 aspect ratio, the film hasn't looked this good in decades. The night scenes, especially at the climax of the picture, look great with little or no artifacts, although there are a few scenes, such as when Malachai and Burt square off inside a barn, where some of the graininess becomes apparent but the film, as a whole, is remarkably sharp and bright.

The audio has seen an upgrade from the original Mono to Dolby TrueHD 5.1, it does an admirable job of handling the score and none of the dialog seems lost in the remix, the music (definitely underrated) sounds clear and helps add to the otherworldly and demonic atmosphere and is actually more frightening than the film itself. (Cue the possessed children's chorus)

This release truly shines with the special features.  Honestly, I was stunned to see so much additional content packed into one disc.  Audio commentary with director Fritz Kiersch, producer Terrence Kirby and actors John Franklin and Courtney Gains is lively and enthusiastic; it's always fun to hear the cast and crew happily discuss a cult film with this much excitement, 33+ years after it was filmed.

Harvesting Horror: The Making of Children of the Corn – retrospective, as well as ‘It Was the Eighties!' an excellent interview with Linda Hamilton as she remembers, fondly, her time on set. It was pretty cool to realize that she was still relatively unknown at the time of this film's release. Her role as the iconic Sarah Conner in Terminator was still 7 months away.

The list of featurettes goes on and on, but there's even a reversible sleeve featuring original and newly commissioned artwork by the much adored "Ghoulish" Gary Pullin.

And last but not least, FIRST PRESSING, a collectors booklet featuring new writing on the film, color photos and original artwork and a double-sided mini poster of the movie one-sheet.

For anyone that knows me, or has read previous reviews, I include the suggested retail and offer a fair summation of whether or not you should drop your hard-earned cash for a movie. In this case, if you are a horror fan, and especially a fan of Children of the Corn, at $29.97 you are going to want to pick this one up.

Heck, I'd even walk behind the rows, for this one.