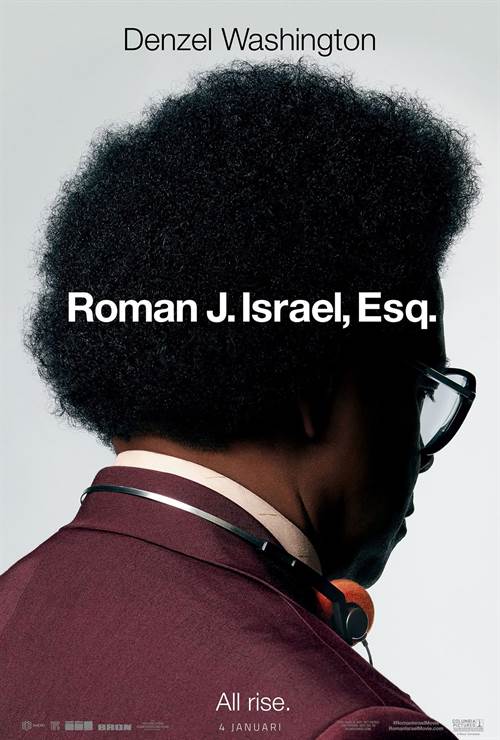 Roman J. Israel, Esq. is set in the underbelly of the overburdened Los Angeles criminal court system. Denzel Washington stars as a driven, idealistic defense attorney whose life is upended when his mentor, a civil rights icon, dies. When he is recruited to join a firm led by one of the legendary man’s former students – the ambitious lawyer George Pierce (Colin Farrell) – and begins a friendship with a young champion of equal rights (Carmen Ejogo), a turbulent series of events ensue that will put the activism that has defined Roman’s career to the test. 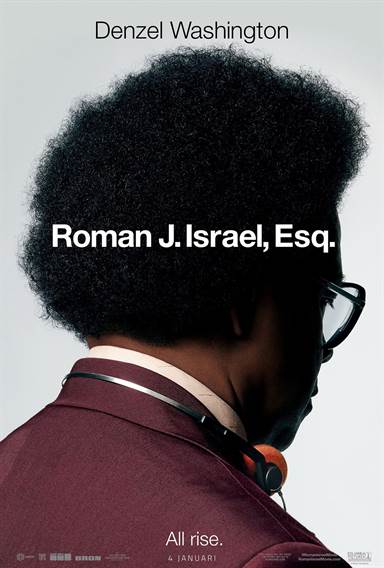 Not everyone is good in a social situation.  Some people can be awkward which makes others feel uncomfortable causing them to treat the social outcast poorly.  Many think those awkward individuals are stupid but they can be very smart and even downright brilliant.  Some of them may be on the Autism spectrum or known previously as an "idiot savant".  However, that doesn't mean they can't hold jobs, or have wants or needs.  In fact, in the case of Roman, they can be intelligent lawyers who simply don't have a desire to step into a courtroom.

For almost thirty years, Roman J. Israel, Esq. (Denzel Washington; Fences) has worked behind the scenes at a law firm he shares with his friend William.  William, "the face" of the law firm, defended his clients while Roman stayed in the office do the research and paperwork.  When William suddenly has a heart attack, Roman learns the truth – that the firm is broke and William's niece plans to shut it down leaving Roman out of work.  George Pierce (Colin Farrell; Beguiled ), a big shot lawyer with a large firm, agreed to finish out William's cases but while doing so, he notices how "special" Roman is and offers him a job.

Roman, who has always been a civil rights activist, takes the job but hates it.  He is, again, an outcast and alienates colleagues while showing up judges and law clerks with his intelligence.  He is sent to defend a client on trial for the murder of a store clerk but said client claims his friend, who is a fugitive, pulled the trigger and tells Roman he knows where the friend is hiding.  After a crisis of conscience, Roman anonymously tips off the police where to find the friend and collects the reward money – an unethical violation of the State Bar.  As Roman uses the money to change his life and gain acceptance, he can't help to have a nagging feeling much in an "Edgar Allen Poe, The Tell-Tale Heart" kind of way.  Ultimately, the betrayal not only weighs heavily on his mind but leads to dire consequences for him as he loses sight of his integrity and his fight for justice for all.

Washington once again shows us why he is an Oscar-winning actor as he transforms himself into the brilliant but socially awkward attorney.  His portrayal is so well done he seems to disappear into the character.  Farrell is good but there isn't enough of him on the screen to truly flesh out this character.  He does an adequate job of trying to give George some depth as he battles between being a big-time attorney and remembering William's teachings about fighting for everyone and being the "change" in the world.

The story comes with a message about social injustice and civil rights but some of it gets lost in the story of Roman himself, as it should. The moral is secondary to the internal struggle Roman has every day, whether it is simply being in society or living with himself after collecting his ill-gotten reward. While the film is interesting and somewhat unique in a world of cookie-cutter scripts, it runs a little too long for me and I found certain scenes (like the one at dinner in the fancy restaurant) to be superfluous.

The movie was unsettling in both a good and a bad way and at moments was difficult to watch.  However, Washington is so amazing in general, and incredible in this role specifically, that the uncomfortable feeling is tolerated in order to see how the plot plays out in the end.