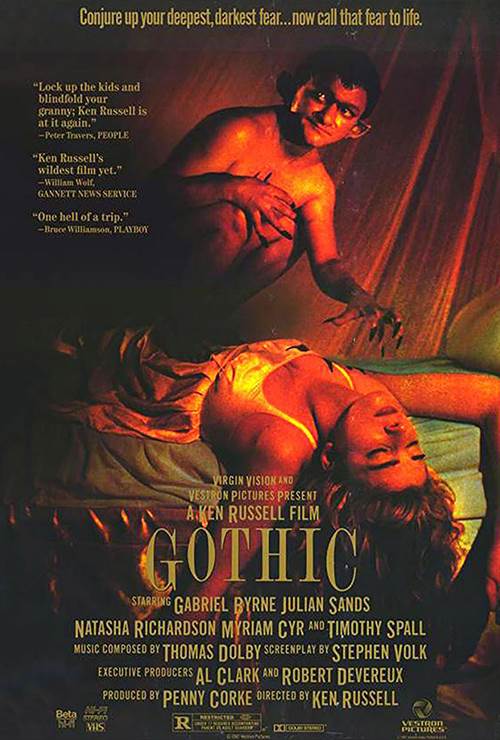 Five famous friends spend a hallucinogenic evening confronting their fears in a frenzy of shocking lunacy and horrifying visions in this fictional tale, which tells the story of Mary Shelley's conception of Frankenstein on one debauched night in Lord Byron's home. 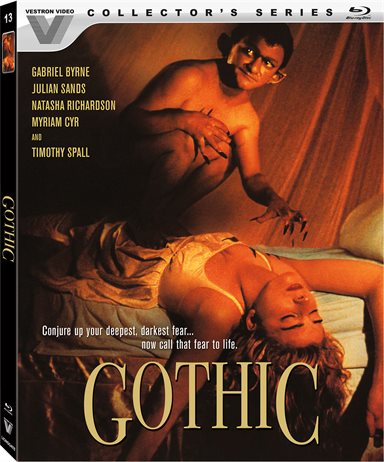 Ken Russell (Altered States, The Devils) is possibly the most difficult Director to digest. He is, at once, profound and profane, simple and complex, acrimonious and pleasant. Ken Russell was many things, but boring was not one of them.  Gothic, starring Gabriel Byrne, Julian Sands, Natasha Richardson - in her first movie role, as well as Myriam Cyr and Timothy Spall, is a fictionalized account of the meeting of Mary and Percy Shelley with Lord Byron at the Villa Diodati. Over the course of a weekend, the group of friends, which also included Mary's half-sister Claire Clairmont, and Dr. John Polidori, proceeded to challenge each other's ideals and morals and, from which, Shelly's seminal horror novel, Frankenstein was born.

On a warm summer night in 1816 at the Swiss lakeside chateau of Lord Byron the poet and his guests -- Percy Bysshe Shelley; his fiancée, Mary Wollstonecraft: her half-sister, Claire; and his private doctor John Polidori -- spend the evening sharing ghost stories while under the influence of experimental compounds provided by the doctor. As the night goes on, reality and the horrific tales begin to commingle.

Upon its initial release, Gothic was a commercial failure but later found its financial success with Home Video.  I believe it was mainly due to Russell's storytelling. The film itself is a literary, if uneven, work of art, frenetically galloping from one scene to another, yet it is the interplay of the actors that help to bring some cohesion to the disjointed storytelling.  Byrne (Excalibur, Miller's Crossing) and Sands (The Killing Fields, Warlock) are perfect as the amoral hedonists, throwing themselves headlong into their lascivious pursuits. Their collective ennui coupled with the use of opium helps drive their collective fears and madness, eventually culminating in the creation of both Frankenstein, by Mary and The Vampyre by Polidori, and ultimately, to Stoker's Dracula.

Vestron has done exceedingly well at restoring the film to its decadent glory. Presented here in 1080p 16x9 widescreen with a 1.85:1 aspect ratio. The movie looks excellent, from the blood-red curtains to Lord Byron's bloody lips during his love-making scene with Claire, to the darkened room where the séance is held and especially to the nightmarish, Fuseli-inspired Imp, perched upon the helpless Mary Shelley, the colors are vibrant and the sets, sumptuous. The opulence of the scenery really must be appreciated here, as the Villa Diodati takes on its own personality and comes vibrantly to life.

The audio is presented in DTS-HD master audio original 2.0 mono, and from the thunderstorms and wild winds to the laudanum-fueled screams of Mary Shelley, the audio sounds bright and clear, if a tad underwhelming.

In this single-disc release, Vestron manages to provide some excellent extras. My personal favorites are the isolated score selections and an audio interview with Thomas Dolby as well as "the Soul of Shelley" Featurette with Julian Sands and "Fear Itself" with the Screenwriter, and much more.

Gothic is a "What If" tale of horror as no one will ever truly know what took place at Villa Diodati, where, on that stormy June night, in 1816, literary geniuses confronted their personal demons to bring about their own catharsis and, in so doing, bring us the most iconic figures in literary history.  For horror movie fans, and especially for fans of Ken Russell, looking for a well-acted tale and something off the beaten path, they should pick up Gothic and witness the birth of legends.